Same here. I have a 5mm in my closet, but I don't believe it's ever been used. 3mm is about all I use. Luckily, where I live that will get me pretty much year round diving. I'm good until about the mid 60's on most dives. As long as I remain fairly active. Leisurely dives require higher temps to remain comfortable.
--
Brian

Started with single 10l IWK, Nemrod J valve, Snark 2, plain harness and buddybreathed.
I like to think we were more rounded as we were diving fit those days and we had served a long apprentice in free diving (spearfishing, snorkeling and u/w hockey) so were not reliant on equipment and at home in the water.
It took me 3 years to achieve a 3rd class via a snorkel certificate.
We knew our weighting for each set of equipment and could sustain slight overweight situations with lung capacity. The test was: Breath in, rise up; breath out, sink slightly.
The standard and ability of the average diver today is much lower. Too much reliance on equipment and a know all attitude.
Age has mellowed me. I use a Poseidon with 2 Cyklons, an Uwatec Gallileo integrated computer, Cressi Surelock i/weight BC ( but prefer using a weight belt) that many times I never inflate during a dive. I try not look like a Christmas tree.
No wonder they call me Coelacanth. I have survived though the ages!

I no longer dive in water much colder than 70F, so a 2mm suit is all I need, and just a skin with a 1mm vest when it's over 75F. In the Caribbean I like to dive with just swim trunks and a tee shirt because I enjoy the felling of water on my skin.
I'm basically a marine life watcher, and scuba has always only been a means to an end, never an end in itself. It started when I was in high school and set up a salt-water aquarium. Tropical marine fish back in the late 50s were hellishly expensive. I grew up at the Jersey shore, snorkeling since I was about 8 years old, and had seen butterfly fish and seahorses at my parent's dock in late summer. Collecting them for my tank led me into scuba, and I still have that kind of utilitarian attitude toward equipment. I must admit, though, that I just love my old Scubapro regs, and get a feeling of communing with my long vanished young self when I use them.

mac66:
Here are some screen shots from the movie...

...And the sub...wikipedia says the sub is electrical powered, the guy in the movie said it was man powered so I don't really know.

I thought I had seen this underwater vehicle before. I have a book, Handbook for Skin Divers, an ARCO How-To Book, by George Bronson-Howard, that has a chapter entitled "Underwater Vehicles," which has two photos of this sub, the MiniSub (see the photo below). This book does not have a publication date, but it is probably in the 1950s. Here is what it says about the MiniSub, which is quite remarkabe:

Two California engineers, C.A. Gongwer and G.M. McRoberts, went far beyond the sea sled recently with their invention of the MiniSub. THis is an actual submarine, albeit small, that can be controlled from the interior by the operator. The principal difference between this bantum undersea boat and its larger relatives is that water is allowed to fill the hull and the operator wears artificial-breathing gear. There are two models of the minisub: a pedal-operated craft and a more advanced design which carries a battery-operated motor, for one or two passengers. With the electric motor in operation it is possible to run at a top speed of over seven miles an hour for almost 11 miles submerged, provided the diver is carrying a two-hour air supply. Using foot power alone, a single man can attain a top speed of five miles an hour; while at a comfortable pedaling rate, a cruising speed of a little over three miles can be maintained as long as the operator is supplied with air. If two ment are pumping, the top speed can reach as high as six miles and the cruising speed runs over four and a half miles an hour. The operators sit erict, back to back, with their heads in transparent domes and work foot pedals located in the nose and tail of the craft. These pedals are chain-connected to gears in the after end which turn counter-rotating propellers mounted on concentric shafts. The propellers are designed for maximum efficiency under water and are aircraft rather than ship type.

The hull and control vanes are made of plastic-liminated glass cloth; the control vanes are six layers thick and mounted on hollow, stainless steel shafts. The hull has access hatches with plastic domes, similar to fighter-type aircraft, wthich afford easy entrance and exit as well as good visibility. Maneuvering the MiniSub is accomplished by manipulation of a single control wheel installed in the nose of the vessel. This underwater midget is capable of performing almost any of the acrobatics performed by an airplane.
Click to expand...

Does the name, C.A. Gongwer mean anything to any of you? He is also the person who developed the Aqueon! He had this submarine in his resume, apparently before the Aqueon.

There apparently is one now on E-Bay in Europe for sale, and it states this MiniSub was from 1954. 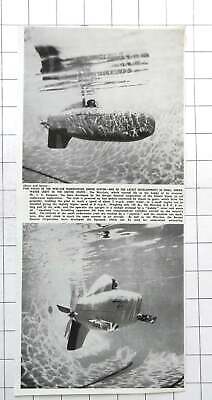 I've been called an "old Coot." Well, that would be the American Coot (Fulica americana ) or mud-hen, and I've done my share of mucking around in low visibility, so it applies. But, you're never too old to learn something new.
OP
M

John C. Ratliff:
I thought I had seen this underwater vehicle before. I have a book, Handbook for Skin Divers, an ARCO How-To Book, by George Bronson-Howard, that has a chapter entitled "Underwater Vehicles," which has two photos of this sub, the MiniSub (see the photo below). This book does not have a publication date, but it is probably in the 1950s. Here is what it says about the MiniSub, which is quite remarkabe:


Does the name, C.A. Gongwer mean anything to any of you? He is also the person who developed the Aqueon! He had this submarine in his resume, apparently before the Aqueon.

There apparently is one now on E-Bay in Europe for sale, and it states this MiniSub was from 1954.

Excellent find, thanks. The guy in the movie said it was man powered and the article said man or electrical powered. I imagine pedaling would use up a lot of air but it's pretty cool in the movie.

My avatar shows me in my kit in the mid 1950s. I didn't realize that I didn't have enough gear

I still dive without a BC every once in a while. I use an SPG and computer while in a 7mm wetsuit. It isn't all that hard if you weight yourself correctly. I don't use drop weights or really adjust my weight belt at all since I am weighted correctly to begin with. My buddy has an old double hose reg he likes to break out every once in a while and we go dive with backpacks and minimal gear. It isn't all that difficult or dangerous as long as you have some skill and weigh yourself correctly.

I also routinely used a BC-less setup for kayak diving because it is much less gear and more streamlined. A favorite spot of mine was to launch off Mission Beach in San Diego, kayak out to the Ruby E, do a dive and kayak back. Usually I did this with a backpack and no BC / minimal gear set up on my kayak.
You must log in or register to reply here.

Nikonos II Flash Operation in Japanese Movie - what movie was that?