Sea anemones don't get much respect and I recently realized I had not yet written about one genus I've never seen in Catalina waters even down to depths of 200 fsw. I've had to dive the colder waters of Wreck Alley down in San Diego to film them on the wreck of the Yukon or the NOSC Tower, or out on the oil rigs off Ventura and Long Beach. They are cold water species and I learned from San Diego diver Allison Vitsky Sallmon that the ones on the Yukon had largely died off during our recent warm water episode, but were now coming back.

The two primary species in our waters are Metridium farcimen (the giant plumose anemone) and Metridium dianthus (formerly known as M. senile) with the common name of frilled anemone. M. farcimen was formerly known as M. giganteum, Actinia priapus, Actinia farcimen and Isometridium rickettsi until a study by Fautin et al. in 2000 determined that they were all the same species and the new name was determined to be the most accurate one. No wonder some get very confused when dealing with this group of anemones!

M. dianthus is found in northwestern European waters from the Bay of Biscay to Norway, on both the Atlantic and Pacific coasts of North America and recently in South Africa. It inhabits depths down to about 330 fsw and attaches to hard substrate such as rocks and man-made structures. The column is smooth and the oral disc is lobed. There are a few different varieties of this species which may range in size from a base diameter of an inch to as much as six inches. Color is variable in different individuals and may be white, cream, pink, orange, red, grey, brown or olive-green although the ones I've observed have all been white.

Metridium farcimen's range was reported in Wikipedia from Alaska down to Catalina Island (where I've never seen it!). However, as I mentioned it is found down in the San Diego area. This rather large anemone can extend to over a yard in length although individuals of about 20" are much more commonly encountered. its coloration varies from white, brick red-orange to brown.

M. dianthus prefers areas with strong currents since it grabs munchies out of the surrounding water with its tentacles which contain stinging cells or nematocysts. Their diet includes copepods, amphipods and the larvae of worms, molluscs, tunicates and barnacles. One report stated M farcimen preferred areas with lower current but also feeds on plankton. In turn they are fed upon by the nudibranch Aeolidia papillosa, the sea stars Dermasterias imbricata and members of the sea star genus Pisaster, sea spiders (pycnogonids), wentletrap snails, flounders and breams.

Reproduction in Metridium dianthus takes several forms. Mature individuals may simply bud off new ones through asexual reproduction. Medtridium farcimen apparently does not reproduce asexually. Of course I find that to be far less fun than sexual reproduction. When using that mode, an individual starts life as one sex and later transitions into the other. Eggs and sperm are cast out through the oral opening (which also serves as the anus) and, with any luck, fertilize externally. The larvae may drift one to six months allowing them to disperse and colonize new areas.

Cloned individuals of Metridium dianthus can rapidly colonize an area and create dense assemblages. Like some other anemones, the individuals on the outer edge of these colonies often develop specialized "catch" tentacles. These are used to do battle with encroaching anemones from another clone. Apparently xenophobia is not limited to humans! 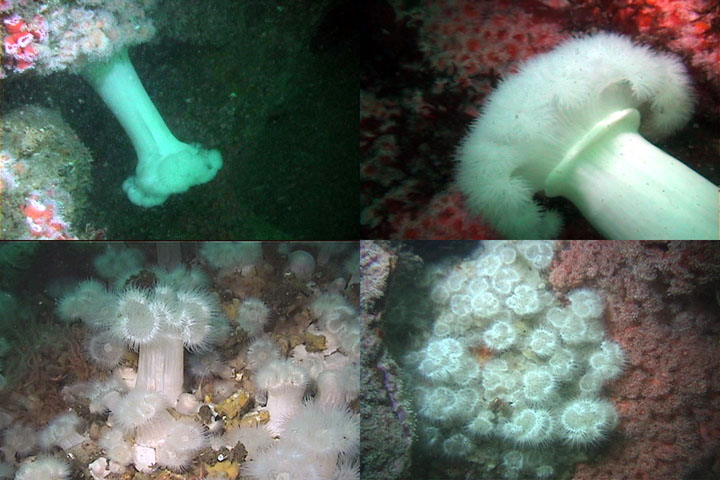 To make things even more difficult, WoRMS says both Metridium dianthus and M. senile are acceptable.

Sometimes they are found in relatively shallow water the further north you look. The piers in Morro Bay are covered with each species in inches of water. In SoCal, I've found M. farcimen in 70 feet off Redondo Beach and M. senile off White Point in 60 feet. 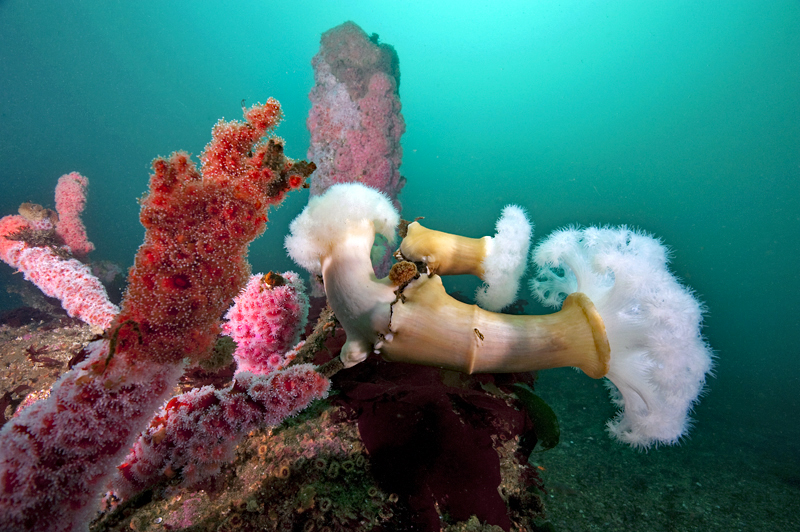 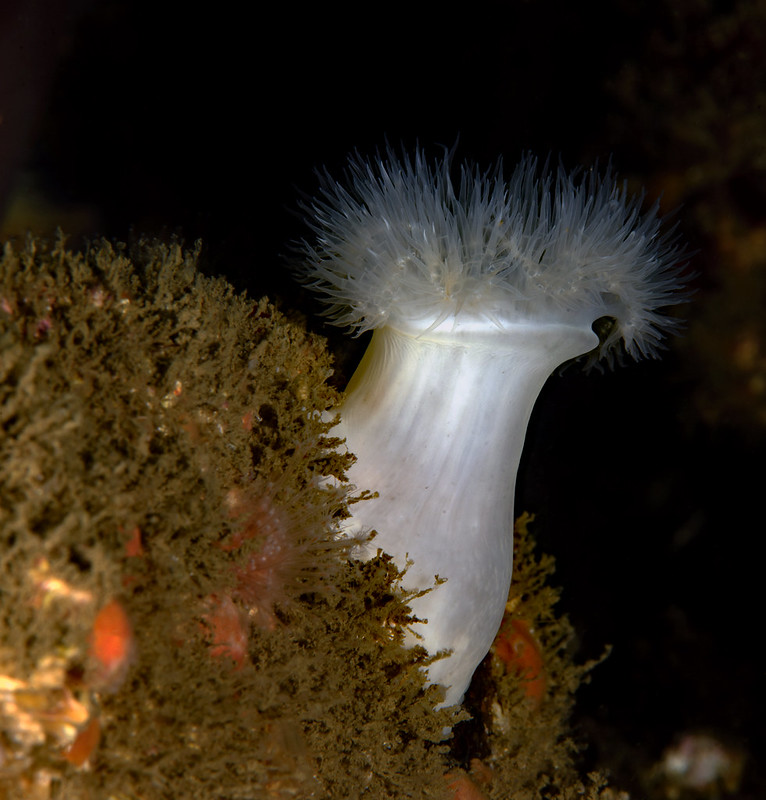 There's a very interesting story by Allison Vitsky Sallmon covering the dramatic changes from 2014 and 2019, including the die off and then the beginning of recovery of Metridium farcimen How Climate Change is Affecting California Dive Sites | Scuba Diving

Any idea how their stings feel to humans? It's often mentioned with jelly fish, but rarely with anemones. Since they aren't free-swimming odds of accidental contact are less, but still interesting.

After reading the article I came away excited to know that climate change is over. Whoo Hoo!
I have no time to be offended by things that don't matter to me.___Wookie
My photos
Southern California Marine Life
Diving the Palos Verdes Peninsula
Instagram

I haven't been on the A.C.E. wreck out of Dana Point in about a year, but I used to see them on that ship all the time. 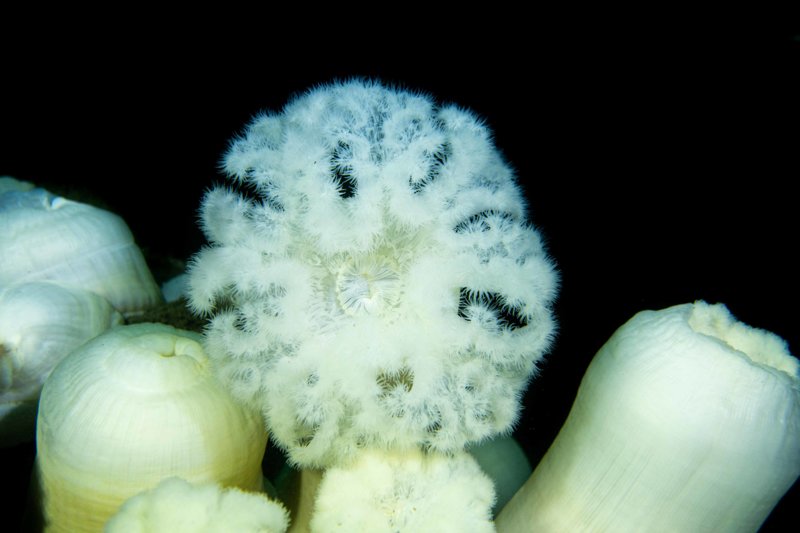 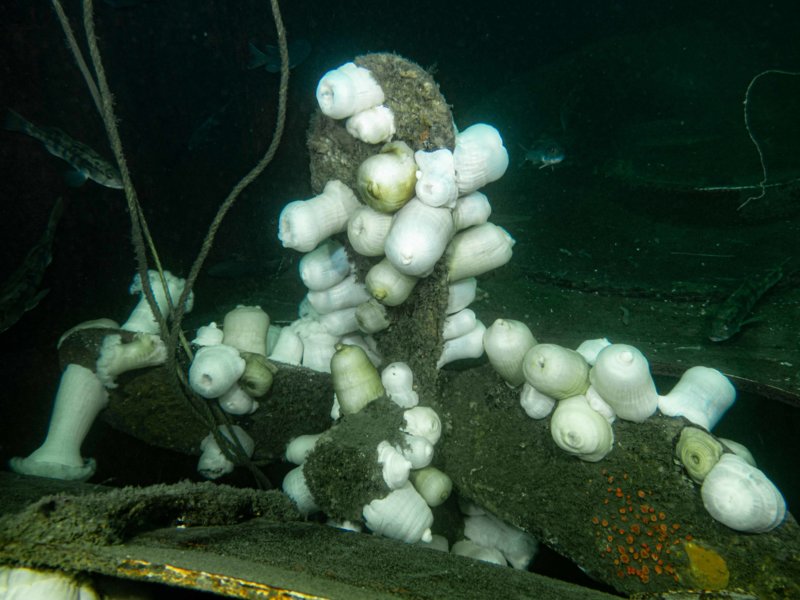 SoCal wrecks are a great place to photograph metridiums. Some have disappeared but others are still covered.
Jenny Lynne wreck off Marineland 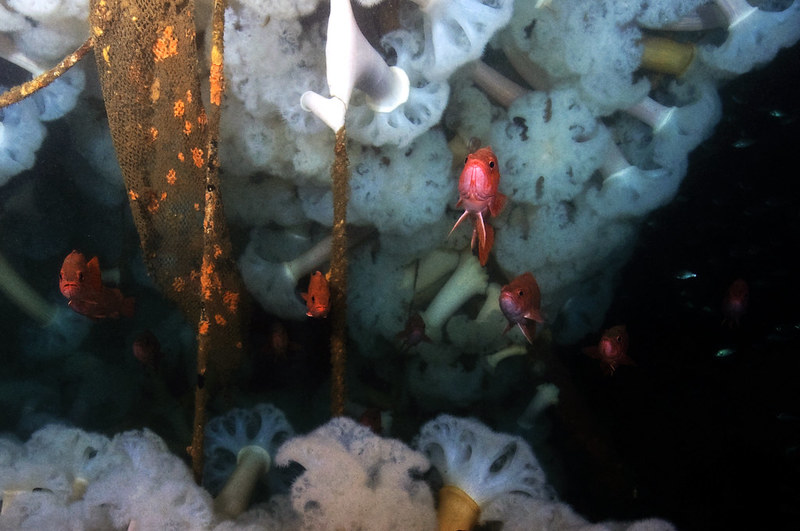 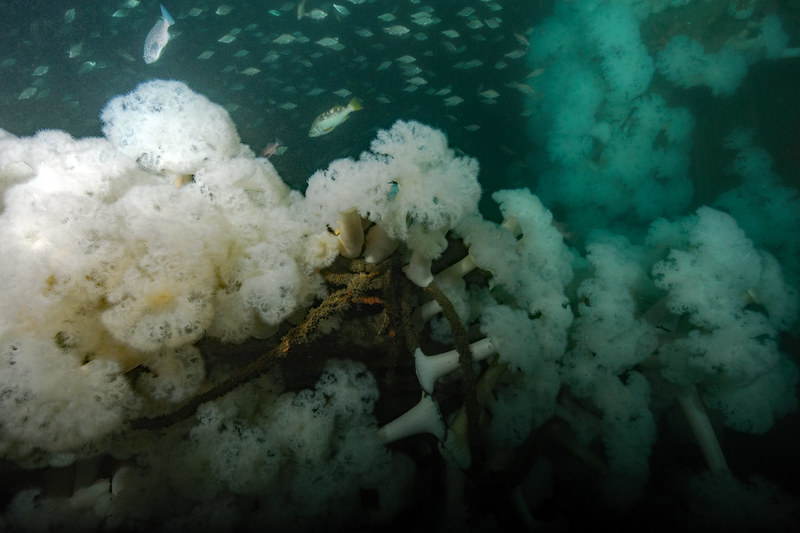 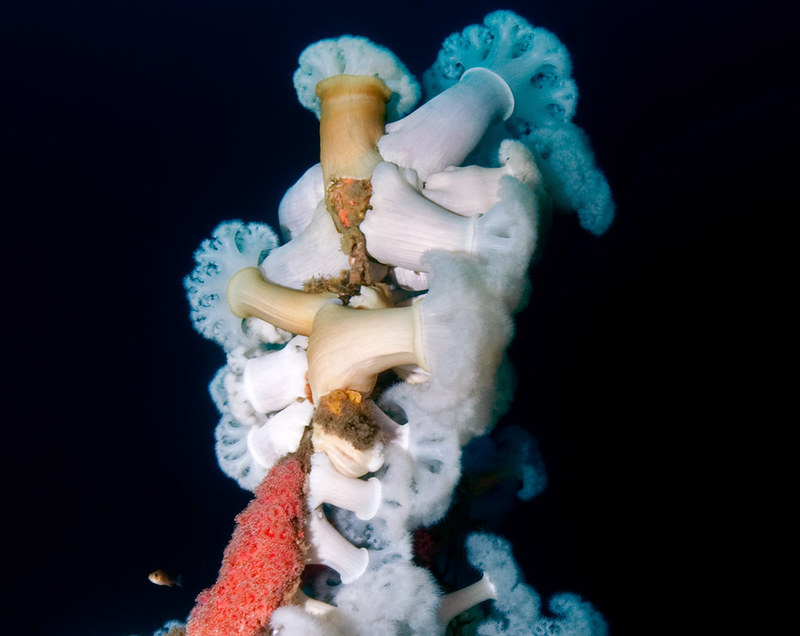 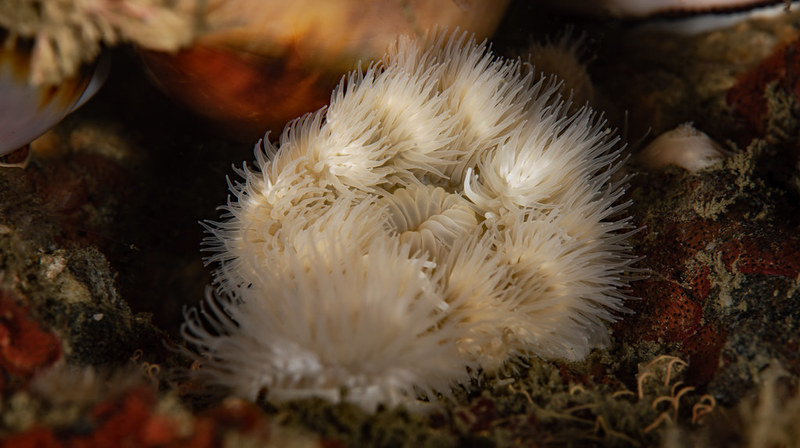 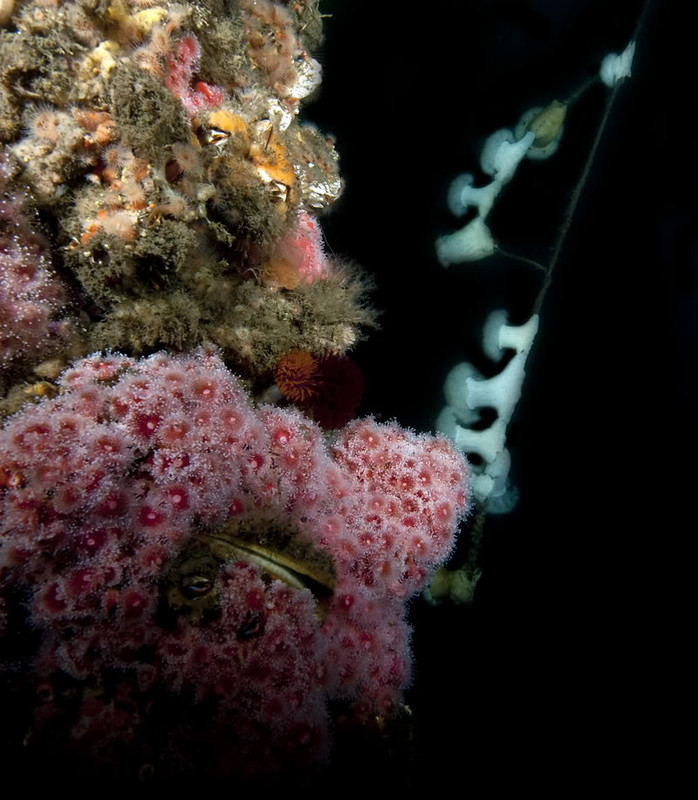 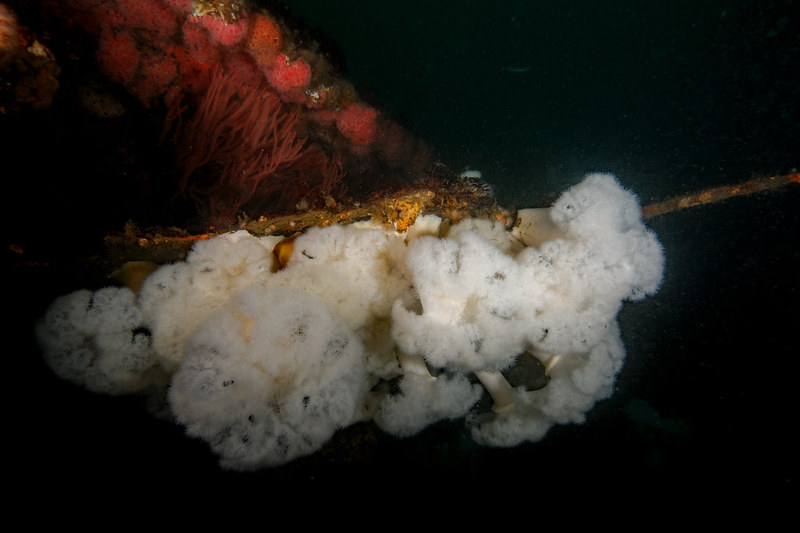 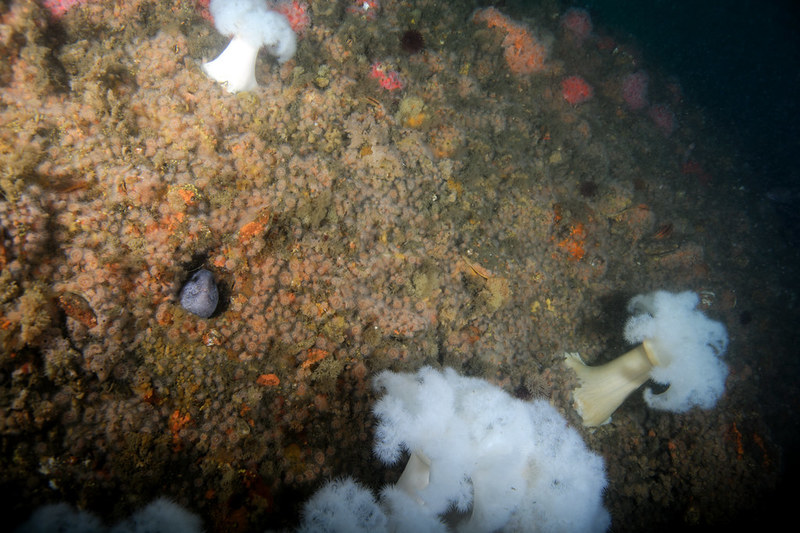