mcpowell said:
@doctormike,
Ok, great example. I keep thinking “but something has to force that sinking diver to begin his ascent”...

I guess if nothing else, his air capacity will motivate him eventually. If you or @rsingler make it to GA, I owe you a beer, or a scotch, whichever you prefer.
Click to expand...

Here’s a way to think about it. Again, just look at a simple compartment for simplicity. All of these explanations are the same even if you consider all of the compartments, it’s just a lot more math. You also have to understand the concept of the “leading” or “limiting” compartment, which is the one most likely to cause trouble by bubbling, and the one that is limiting your dive by controlling your ascent. This would be the compartment where the supersaturation is greatest, and it’s not always the fastest compartment.

Looking at one compartment, at any point in the dive, that compartment can be assigned a number corresponding to how loaded it is with nitrogen compared to ambient - lets call that number the gradient (G). We normalize these numbers by plotting them on a scale ranging from 0% (ambient pressure) to 100% (the M-value of overpressure, or supersaturation). If you have a fully saturated compartment at depth (G=0%), as soon as you begin to ascend the compartment will become supersaturated (G>0%) relative to the new ambient pressure, even though the N2 loading of the compartment hasn’t changed much yet.

Remember, this number isn’t a measure of absolute N2 loading, but a degree of supersaturation compared to the M-value line. So if you go to 40 feet, sit there until your leading compartment is saturated, and then instantly shoot to the surface, you may well be over 100% even though your total N2 loading (based on time and PPN2) isn’t that great, and you risk DCS. On the other hand, if you go to 300 feet and then ascend 40 feet, you will have a much greater amount of N2 in your tissues, a much higher PPN2, but your gradient will be smaller because the ambient pressure at 260 feet is so much greater than at the surface.

GFLo isn’t something that you measure during a dive, it’s an arbitrarily chosen input to your decompression algorithm. The algorithm takes GF, mix, depth and time at depth to calculate your first stop. Change your GFLo from 30 to 50, and your first stop will be shallower.

So nothing “forces” anyone to ascend other than your dive plan. When doing tech diving, you figure out how long you can stay at your selected depth by working backwards. You pick a GF, time, depth and mix, and your software calculates for you (1) a safe ascent plan with all stops, and (2) how much gas it will take you to safely complete that ascent. Usually, you also run a scenario where you have to complete decompression on your back gas only (without a richer decompression gas - the lost gas scenario). If the ascent takes more gas than you are carrying (including a safety margin), then you need to start again with a shallower and/or shorter dive.
dive.rothschilddesign.com

And, in case my last post was TLDR, here's a great video from Shearwater that explains this with a terrific visual aid on the Petrel.

DoctorMike, your explanation is terrific. Thank you

Attempt #4. Thanks to all the contributors here, specially @rsingler for taking the time to draw his chart. As usual, we enjoy working and collaborating with fellow divers to make things a little bit more clear, if possible.

The greatest enemy of knowledge is not ignorance. It is the illusion of knowledge.
http://www.shearwater.com

Awesome! Here's one more thought that just occurred to me, since we are having such fun with this graph.

Unlike the M-value line and the ambient pressure line, the ceiling line doesn't really represent any physical phenomenon that you could measure. It's just shorthand for saying "I'm making my first stop at 30%, I'm getting out of the water at 80%, and in between those two dive waypoints I'll just interpolate in a linear fashion to determine intermediary stops". But in this diagram, we have the line extending to the right of the first stop. Which raises some questions.

1) Does the line really exist before (deeper than) the first stop? I don't think that it does, because it is defined as having maximum depth at one end, and the surface at the other. If you make your dive deeper, then the algorithm is going to generate a different line, as opposed to tracing backwards along the same line.

2) What do you call the point where the ceiling line intersects the ambient line? Mathematically, if you extend them both to the right, they will cross somewhere, since they have different slopes. But given the fact that we represent the slope of the decompression line (blue) to be shallower than that of the ceiling line (green) during the ascent between stops, this intersect isn't at the point of ascent from maximum depth (at least, the way that it is drawn). I think that this intersection doesn't actually exist, because the ceiling line has no meaning beyond the depth range of the dive that generated it.

3) Complicating question #2 is the fact that the slopes of the M-value and ceiling lines are arbitrary, since there are no units on the graph, and the diagram is drawn to illustrate a concept rather than provide an accurate measurement. Even if you were to put PPN2 numbers on the X and Y axes, this diagram is just a simplification of 16 different compartments, each with different M-value lines (and even the 16 compartments are an arbitrary construct).

I'm not a mathematician, and I may be missing something here. What do you guys think?
dive.rothschilddesign.com

Concur. It's why the dotted line in version 1 of my hand-drawn thingie didn't continue past the first stop. But conceptually, there's an undefined need to ascend toward a "ceiling" when you graphically portray concepts like this, so I can understand why one might extend the line. Hence, version 2.
But technically, I think you're right.

mcpowell said:
Why are the GF Settings scaled differently?
Click to expand...

I was wondering that also just changes the way the deco line looks.

It has to do with trying to combine all 16 compartments into an amalgamated graphic. See this from Eric Baker. Since the fastest tissues can accept larger overpressures than slower ones, the combined line can't parallel ambient: 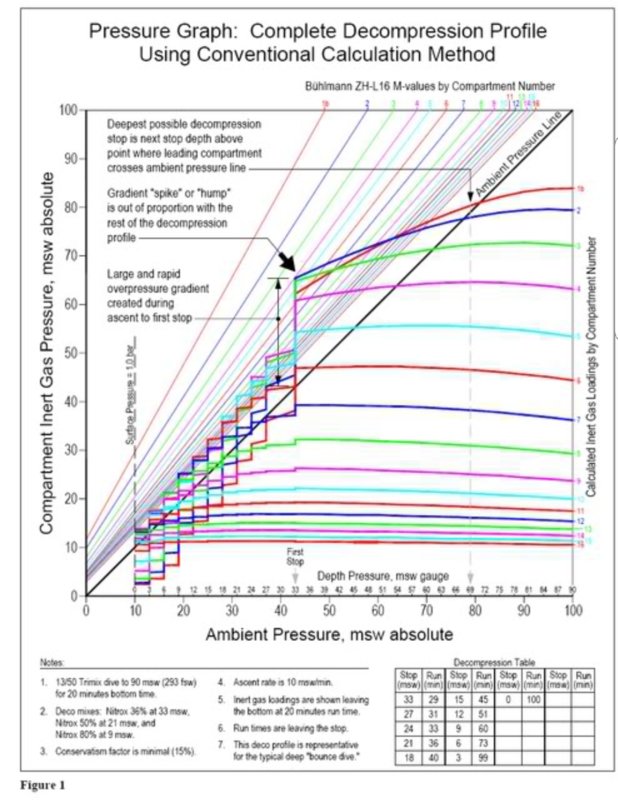 rsingler said:
It has to do with trying to combine all 16 compartments into an amalgamated graphic. See this from Eric Baker. Since the fastest tissues can accept larger overpressures than slower ones, the combined line can't parallel ambient:
View attachment 482527
Click to expand...

rsingler said:
It has to do with trying to combine all 16 compartments into an amalgamated graphic. See this from Eric Baker. Since the fastest tissues can accept larger overpressures than slower ones, the combined line can't parallel ambient:
View attachment 482527
Click to expand...

yes its relative to the ATA pressure at a given point verus surface ATA ie greater depth = greater ratio
We are entering an alien environment that is normally hostile to human life without mechanical means. We cannot breathe underwater. We rely on a few pieces of metal and plastic to keep us alive by allowing us to breath a finite amount of air that we must also carry. Sounds a little more serious that way doesn't it.
JIm Lapenta
You must log in or register to reply here.

how to select new Nitrox in Teric?
2