Today one whale shark sighted on the boat with the early time slot although guides thought there were two additional ones. This whale shark found be watching for the birds feeding on the bait fish. Whale shark was 25 to 30 feet. Snapper still deep - divers at 60 feet can see them. Visibility still very good so spawning may not be underway yet?

Our other two boats had a later time slot. One saw 3 whale sharks and the other saw 5.

No doubt - the whale shark are here. Three to four days after the full moon.

Woohoo! I was on the later time slot boat that saw 3 (or at least two different ones base on size). All on the surface. Super cool. And so funny seeing how fast we could get out of our dive gear and throw ourselves in the water to snorkel. Crew was amazing at getting us to the right spot for viewing. 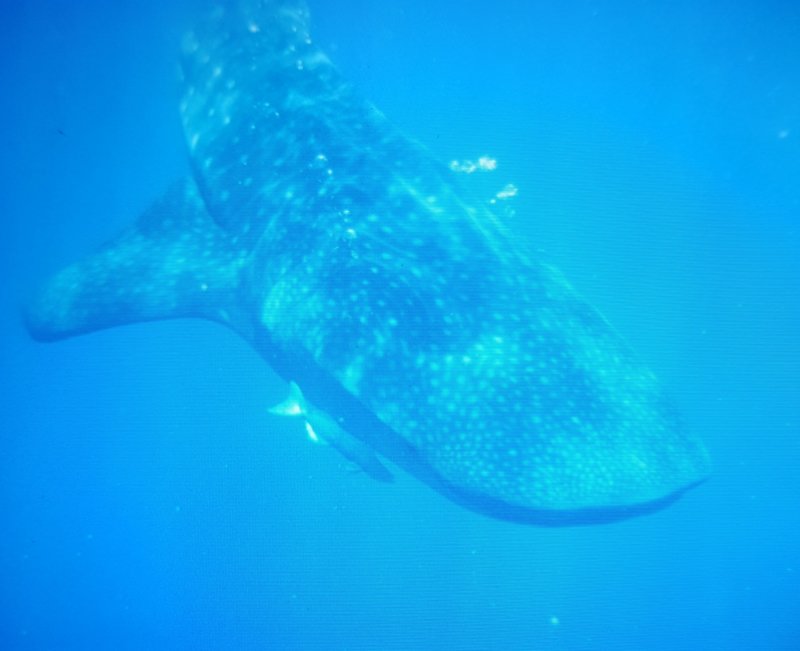 I've got it on my calendar for next year. Gotta log a few more dives to meet Ralph's minimum, and want to do the Blue Hole trio before this. But this pic has got me PUMPED!

Ralph, Thanks for the updates and insight.
OP

Only one whale shark seen May 5 and that was found on surface after the second dive by finding the birds feeding on the bait fish outside of the whale shark zone.
Lots seen during the dive and surface interval - sharks, including two hammerheads, and dolphins feeding on the mutton and cubera snapper in the whale shark zone and 4 manatees, some turtles and rays seen during the surface interval just inside the barrier reef. During the first dive the mutton snapper were at 136 feet and on the second dive they had risen to 80 feet. The snapper rise to spawn.

Check out the short video from 2010 at this link:
The cubera snapper were below the mutton snapper so still quite deep.

May 6 We had one boat out and did not see a whale shark. One other dive operator did see one by looking for the birds. They arrive before us we got there just a little too late. Less sightings of the other usual visitors - but the dolphins were there again. Snapper were deeper today - well over 100 feet and water was clear at depth. Local fishermen are of the opinion that the snapper have not yet spawned (based on their view that the snapper bite more often when spawning. The fact that the whale sharks are around but not feeding in the whale shark zone suggests they may be right. We will look again tomorrow.
Regards
Ralph

Fingers crossed for all the divers signed up for tomorrow's dive(s)! Video, Video, Video!!! ;-P
OP

May 7 we did not do a whale shark trip due weather conditions although were able to do some other trips after waiting on conditions to improve.
OP

May 8 whale shark seen - again on surface by finding the birds feeding. All the usual suspects seen during the dive over the snapper.
OP

May 10 No whale sharks seen. Last report until we start the next whale shark moon season on May 29th.

Fingers are crossed that this next moon season is the whale shark jackpot. Signed up for the June 10th trip and would love to make a bucket list check mark!
You must log in or register to reply here.