I was down in PDC (Playa del Carmen) for full cave Aug 3-10. Class took 5 days and the last day was guided fun dives with instructor. I had a very specific timeline I was working with, to get full cave done OC SM before my CCR arrived the second half of September. I prefer cold. Me going to MX in August was something that had to be done. I will probably never go back. It was not a fun trip. It was a successful trip as I passed full cave. It was something to be endured due to the heat, humidity, and skeeters.

Instructor was Alessandra (Ale) Figari of Cave Training Mexico. She’s been in PDC for nearly 30 years and a cave/tech instructor for at least 15 years. Her shop also offers PADI recreational and tec classes, CCR training, and cavern/cave guiding. Alessandra is a TDI, RAID, and IANTD instructor, in addition to PADI. I did TDI Full cave. Besides her native Italian, she speaks fluent English, Spanish, and French. She has students of all nationalities. She had a group of South Koreans this spring for a TDI cave class.

Ale specializes in older (over 40) students and gimpy people. I have knee/sciatica issues myself. She’s had at least one one-legged cave student. Ale is early 60s herself. She was highly recommended by my WI cave/CCR instructor. They’ve been friends for years. In our first conversation I mentioned my knee/sciatica issues. She immediately suggested we get a porter aka scuba sherpa to haul ALL our gear. Our porter was a late 20s guy named Arturo. He dives some himself. He even brought our SM rigs to where we were standing at the water’s edge. This was valet cave diving. It allowed me to focus on diving and not wear myself out hauling tanks up and down the stairs. 500 pesos a day for the porter. We split the cost.

We did two days at Jardin del Eden, and three days at Tajma Ha. Fun diving was at Nohoch. Eden was very busy with swimmers and snorkelers. The cliff jumpers were fun to watch. I liked the entry at Taj and Nohoch better as we were able to gear up standing in shallow water rather than standing on a slippery wooden ladder with weirdly angled steps, as at Eden. Taj was quieter, but the skeeters were worse. Nohoch gets my vote for best grounds as there is gravel everywhere, which greatly cuts down on mud.

Ale is a very patient instructor with a great sense of humor. We alternated days of two shorter dives (45-60 min) and days with longer single dives (75-85 minutes). I learned a ton and my diving showed it.

I normally dive dry (thick undies) with steel 85s SM and a DR Nomad XT. I dived wet in a 5mm for class with my Nomad. Yes, it’s overkill for AL80s, but it’s what I’m used to. No need to complicate class. I was fine temp wise in the 5mm. The 81F water temp below the halocline at Eden was too hot for me. I was much happier with little to no halocline at Taj and Nohoch, which meant 75-76F water temps. Ale dived SM, as well. I did two dives at home with wetsuit and AL80s before class.

Travel: I flew Southwest from Chicago O’Hare direct to Cancun. SW just started flying out of ORD about 18 months ago. I live 30 min from ORD so much more convenient than Midway. There is one daily non-stop, direct flight each way. I made sure I was on it, due to current chaos with connecting flights. 3:40 flight time. I had a business select ticket. $725, bought late May. Due to being first to check in on both flights I was the first to board. Got my preferred aisle seat, row 3 or 4, and overhead space right above my seat.

Hotel: Aventura Mexican in PDC, recommended by instructor. $407 for the week, about half off with a special mobile only rate on the Booking.com app. Requested a first floor room due to my knees. No elevator. Rooms are around a courtyard with two pools. Room was very clean, with a fabulous bed. Toiletries are provided. AC was VERY cold. The on site restaurant provides a continental breakfast (included in hotel rate) of coffee, juice, toast, and cut up fruit (canteloupe, watermelon, pineapple). Several mornings the fruit was inedible. TA recent reviews mention the same. Two mornings I got a ham and cheese bagel. Very good. Hotel Wi-Fi was excellent. Monica in the front office was fabulous.

I did not rent a car. I pre-booked a private shuttle between airport and PDC with Thomas Moore travel, recommended by a friend who has used them for decades. $180 round trip. Ale picked me up for diving each day and we got lunch on the way, stopping for drinks, sandwiches, and cut up fruit. I got my sandwich each day from Sabrina, an Italian bakery/cafe next to the dive shop. I believe they’re a chain.

Class/guiding fee was $250/day. It was just me. Tanks and fills (air or 32%) are included in class fee. We dived 32%. The dive shop has space for students to hang up suits to dry overnight, as well as a place to charge your lights. I didn’t have to take any gear back to my hotel.

I would definitely recommend Ale or the hotel.
OP 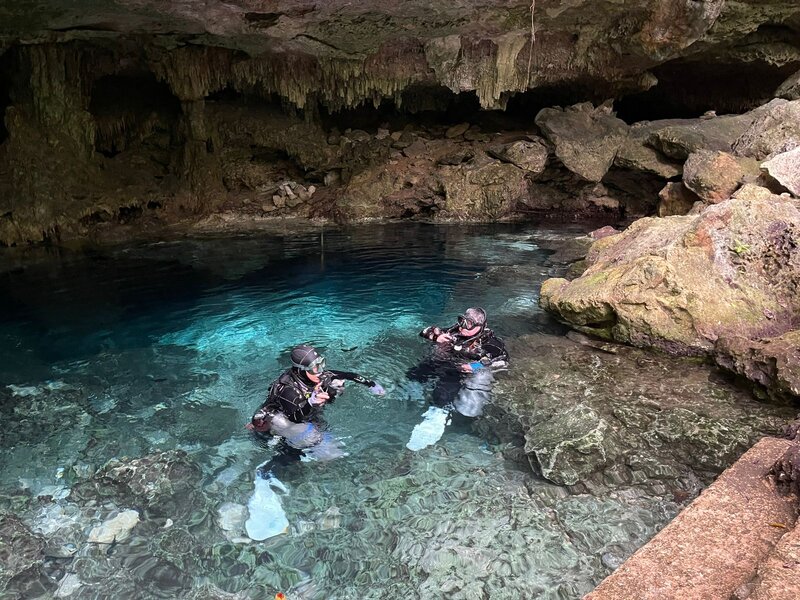 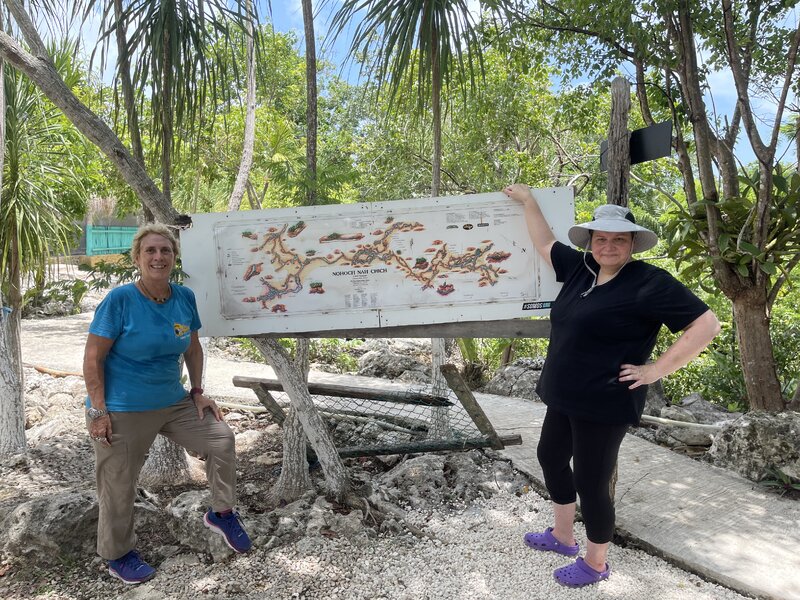 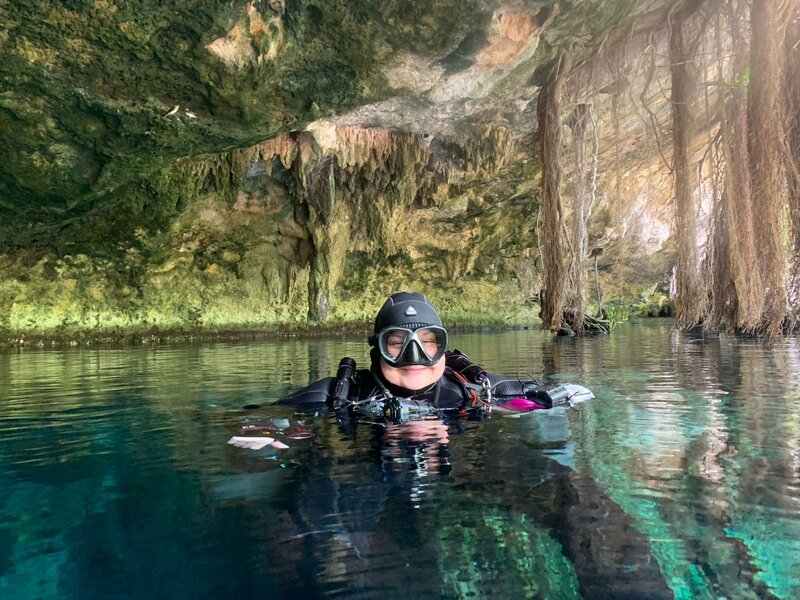 The heat and humidity were awful. We were picking restaurants based on if they had good ac. No ac, I didn’t eat. I was definitely off my feed. Couple of nights I just went straight to bed without eating much. Just didn’t feel like it.

Congratulations and thanks for the write up! I personally love Taj Mahal; such a picturesque cenote. The mosquitoes are definitely legendary down there too - my wife once had a mark/scar for maybe 6 months from a muggy/rainy visit we did to Angelita (but still totally worth it!).

Location
Georgia, the state, not the country ;-)

Congratulations!
What you know 'bout Rollin' down in the deep?
When your brain goes numb, you can call that mental freeze
When these people talk too much, put that *stuff* in slow motion, yeah
I feel like an astronaut in the ocean
-Masked Wolf

Awesome and congrats! I live in Alabama so I’m used to heat, humidity, and mosquitos.

Robert H. Diver:
Awesome and congrats! I live in Alabama so I’m used to heat, humidity, and mosquitos.

Skeeters are the unofficial state bird of my native Michigan. We have heat and humidity in the Midwest, just not to this degree. Ugh.

Tolerating Mexico in August when you hate heat really shows your dedication! Or at least dedication to the timeline of completing this before your CCR arrives. I scheduled my Cave 2 for December, but I could have done it this summer if I had wanted to. I have been there in the summer before, and I know it sucks with the heat and bugs. We students have enough on our plates without suffering from the heat. And how great that you found an instructor who knew how to accommodate your knee/sciatica issues--a dive sherpa! Anyway, kudos!

Marie13:
Skeeters are the unofficial state bird of my native Michigan. We have heat and humidity in the Midwest, just bit to this degree. Ugh.
Click to expand...

I’ve been to Michigan once, in the winter ..so the humidity I experienced was frozen LOL. Beautiful state though.

Great writeup and congrats Marie!
You must log in or register to reply here.