So I may have just found my new favorite handheld dive light. I did a video here of the unboxing, operation of the light, and coverage of some of the aspects.

After unboxing I ran burn tests with a known good Panasonic 3400MaH 18650 cell to get real run times vs stated run times and I was quite impressed with what I got. I bought several items for testing based on my first experience with Nautieye, and so far I am quite please with everything I have gotten from them. With an 18650 (not included with the light, it comes with a battery holder to hold 3AAA batteries) it states that you will get 650 lumens and a runtime of 90 min + 10. I think that was meant to be +/-. With 3AAA batteries it runs at 350 lumens but does not state runtime. I did not test runtime on 3AAA's. I used an 18650 for all testing and got this:

Here are a couple during the burn test that somewhat let you see the lights spread in water: 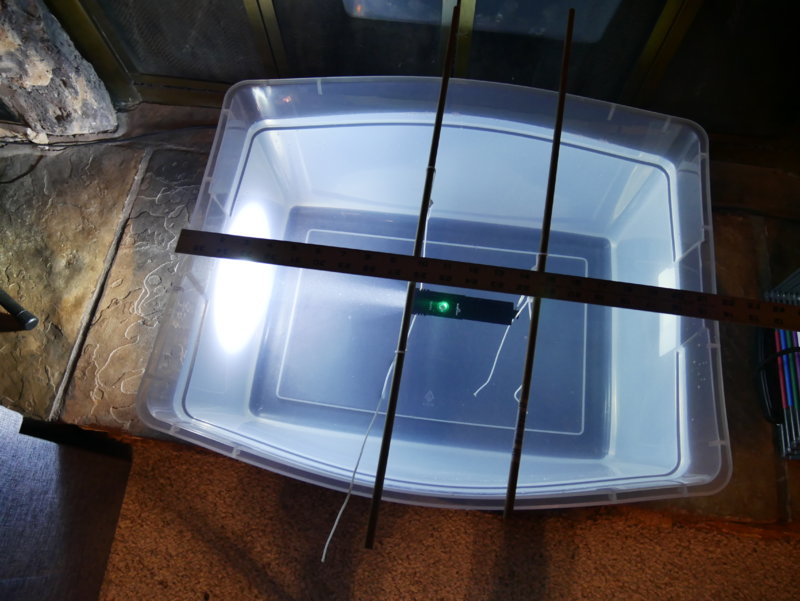 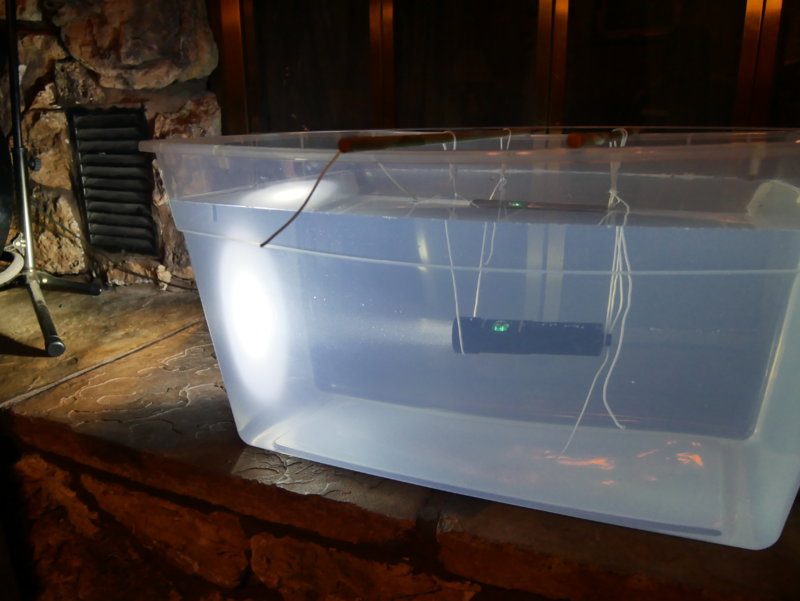 On full power the light ran for 3 hours and 14 mins, or about double what Nautieye states. It has been my experience so far, that every product they make is accurate in their published lumens, output, battery Mah, etc, or they are conservative and reality is better than they publish. This light does not appear to be a constant rate burn but is very usable well into that running time. I did quick checks during the test and compared a fully charged NE650 to the running test to see how much weaker the light got over time. I do not have measurement equipment so these are just estimates on my part. At 25 mins the light was roughly 10% dimmer. At 45 mins in it remains the same. 1 hour 15 mins in it is down roughly 15% output from full. At 1 hour 45mins it is down about 30%. At 2 hours and 15 mins it is about half power. It gradually declined over the next hour. At 3 hours it wouldn't be very workable except in the darkest environments.
I recorded how long it took to reach each battery level on high power
What was really impressive was how long it ran at LOW power on a single 18650. I got a total runtime of 12 hours and 15 mins. This gives you the range of runtimes form high to low.
I recorded how long it took to reach each battery level on low power

So This light could be run conservatively in tropic diving for occasional spotting and using some lower power modes and could make it an entire week on a single battery for some divers, or with 1 charge after a few days diving with divers using it in high power for spotting in crevices or wrecks.

I have a few other lights in this power range and I am showing light spreads here for comparison.

All shots were taken with the same iso, aperture, and shutter speed, at 26 inches form my garage door. 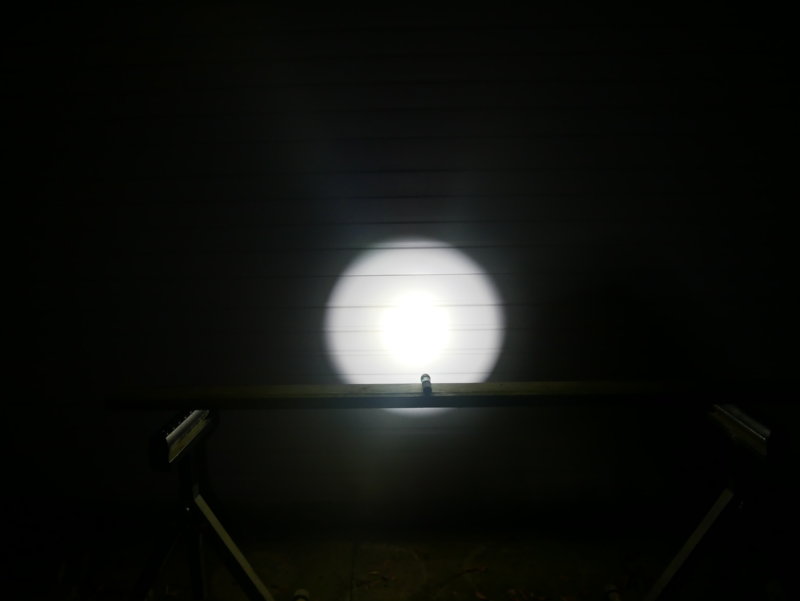 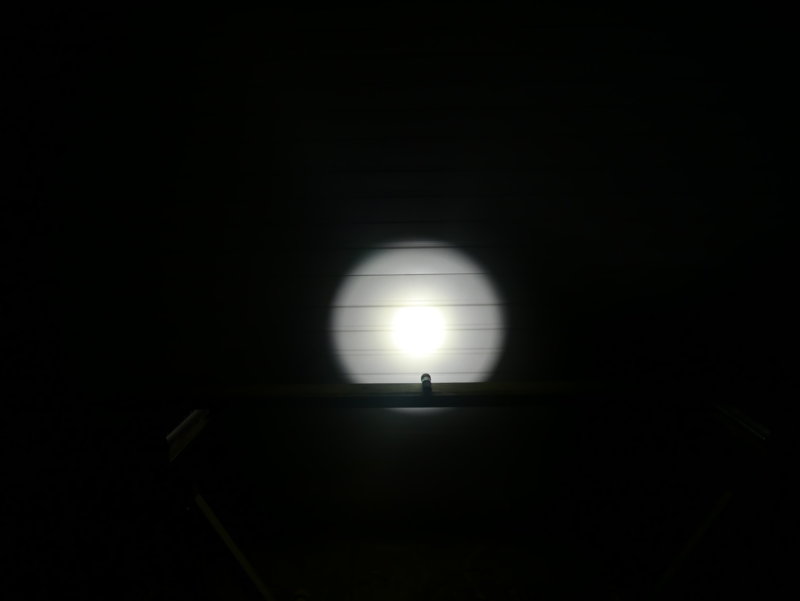 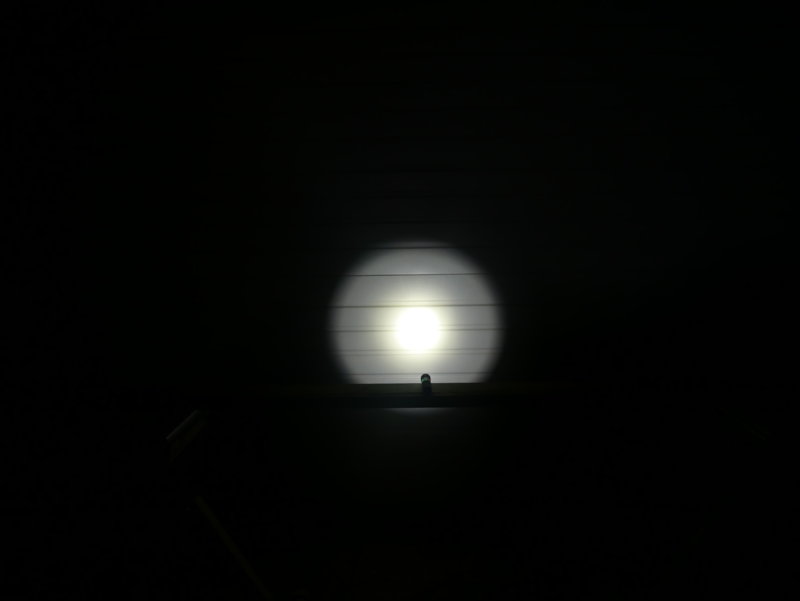 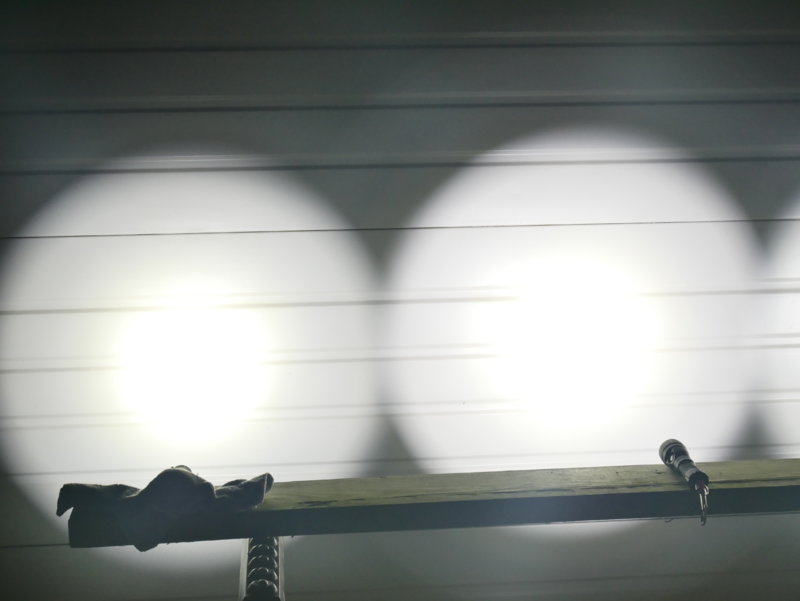 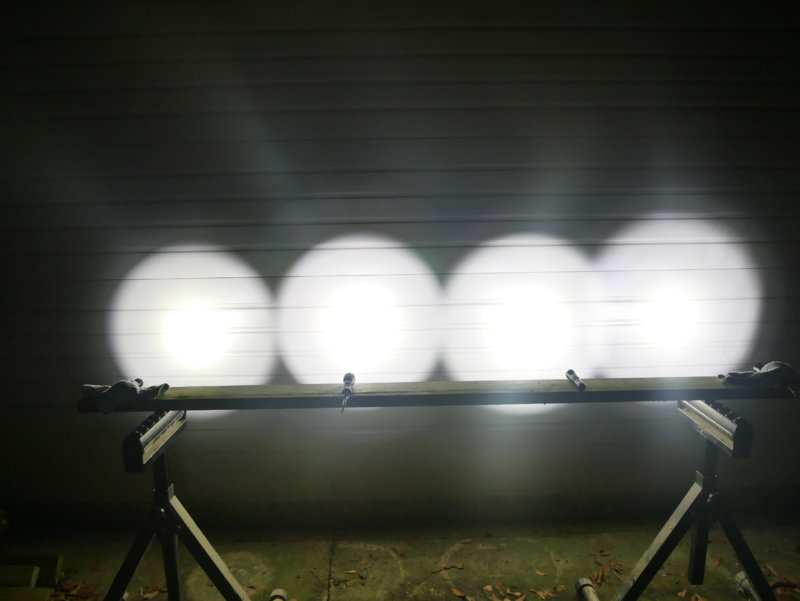 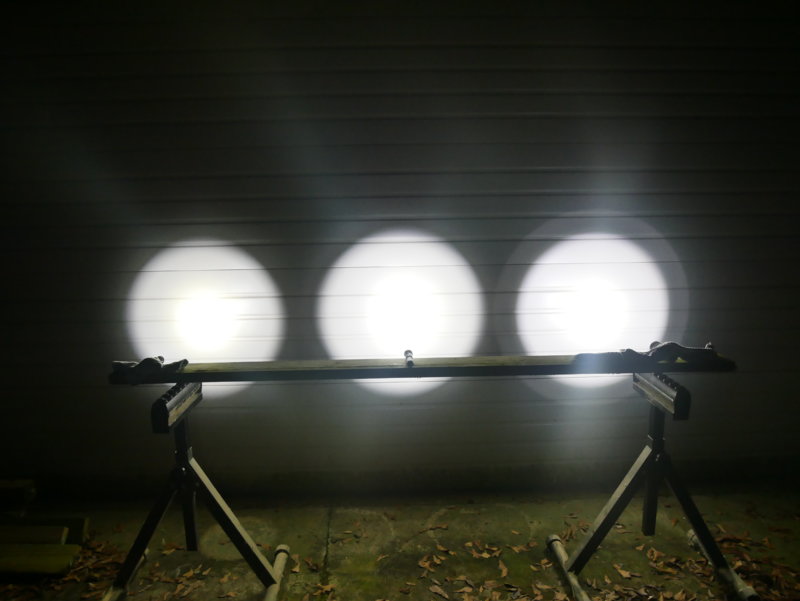 I like the overall feel of this light over the others I have. The barrel is textured making for a good grip even with wet hands. It is smaller and slightly lighter than my other lights. It is small enough to fit in almost any pocket or clip onto a BC and be unobtrusive and out of the way. Another thing I like about this light is the fact that the light barrel diameter is almost the same front to back. I use lights on boltsnaps and clip them to my shoulder D rings. I then have a neoprene sleeve to pull up and around the light to keep them streamlined. I find that on lights that have a larger head than body the sleeve works its way up the light over a dive toward the boltsnap. On some dives I end and the neoprene retainer sleeve has worked its way all the way up to the boltsnap defeating the purpose of having it. With a light like this the retaining sleeve stays in place easier.

Cons
⦁ The beam angle of 10 degrees could be a little tighter but that is really nitpicking. I cant find much I don't like about this light.


I was impressed with the video light that i originally bought from Nautieye, and ordered several more products to evaluate which I am doing reviews on and posting here. I have been impressed enough that I have worked out discounts with them so that I can offer these Items at a discount under MSRP. MSRP is $60 on this light though I see other rebrands of this selling for up to $75. I can offer them at $50 each with buyer paying shipping. Keep in mind these do not have a battery only an AAA holder. I can get 18650 and chargers for them but chances are you can obtain them for the same price as me so that would make the price higher with shipping. If there is enough interest I can place an order for some of these. If you have questions I'll do my best to answer.

More to come on other Nautieye lights.....
You must log in or register to reply here.