If it were male, Duane. (Check out Phil Silvers)

All of my dogs have told me their name in the first few weeks, the exceptions were that one dog was already named and the other pup my niece informed me of her name.

Bob DBF said:
All of my dogs have told me their name in the first few weeks
Click to expand...

But you need a point to start from


tracydr said:
She is precious! My very smart girl is named Lucy. Diamonds are Forever is the registered name. I was supposed to pick a James Bond theme for her name. She was born on 7-7-07.
Click to expand...


Diver0001 said:
Those key words immediately makes me think of the Disney princess from the movie "Brave", her name was "Merida".

Didn't see the movie, the name is new though

There's no particular reason for this name, but it would make me delighted, personally, if you would name her Cheyenne.

Why? Because, when we had our first Doberman litter, we had a very funny story. We had taken the bitch to the vet for x-rays, to find out how many puppies to expect, and they said 10, and maybe 11. So when she began to whelp, we counted puppies . . . we had 9 healthy black and tans, and one stillborn, not completely formed puppy, and then, after a hiatus, an 11th black and tan puppy. So we figured that was our "10, maybe 11", and we told our stepdaughter we were going to ride our horses, and to keep an eye on the bitch to make sure she didn't roll over on the puppies or anything untoward.

When we got home, Victoria met us on the porch and said, "You need to come see -- Justice had another puppy, and I think it's sick." I leapt out of the car and began running up the stairs, when the thought struck me . . . how would Victoria know if there was something wrong with a puppy? So I asked, "What makes you think it's sick?" And she solemnly told me, "It's the WRONG COLOR!" She, of course, had never seen a red dobe, and had no idea they came in that color.

The puppy wasn't sick, but we ended up keeping her. I think she probably did have a little hypoxic brain damage from being the 12th born, after more than 8 hours of labor, because she wasn't very smart, but she was one of the sweetest dogs you can imagine living with. Although she couldn't learn very well, she desperately wanted to, and she would try and try and try to get things right. It took six months to teach her to sit, where her father had learned in four repetitions in a single session.

At any rate, she was deeply and thoroughly loved, and we cherished all of her 8 years.

I would love the name to live on with someone else's beloved Doberman. 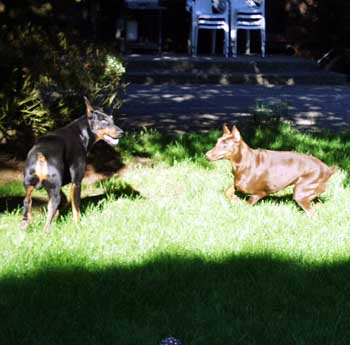 Come with me and Peter to the Philippines this fall!
A journal of my open water class (from 2005) can be read here.
Okay, you've heard all our opinions. Want to know what the science is? http://archive.rubicon-foundation.org/
About GUE Fundamentals versus Intro to Tech: "ITT informed me that I was expected to donate my long hose whereas Fundies beat me into actually doing it, thirty times, halfway through shooting an SMB, upside down while swimming backwards in sulphuric acid."
D

If you're going to go Egyptian, then you'd probably be better off with "Anubis". The statue of Anubis in Tutankhamen's tomb depicted a crouching dog very similar to a doberman (probably a jackal).

However, Anubis was male. If you wanted to look for something related to him but female you could try Bastet (his mother) Anput (his wife) or Kebechet (his daughter).

Personally, the more I think of it, the more partial I am to Penelope. LOL (I know, I know, it's not my dog... blah blah blah). In reality, you'd shorten it to "Pen" or "Penny", which I still think would make good names.

Are you getting any inspiration from this or is it all just confusing you?

Since you are hear name her Deco
DRIVE. DIVE. DEVOUR
OUR TRAVEL BLOG AS WE TOUR THE US IN OUR MOTORHOME​

Cocoa
“Peace is that brief glorious moment in history when everybody stands around reloading.” — Thomas Jefferson​

I know a lot of people who are philosophers and they sit by the river and talk about what that underwater world might look like. And I'll say 'Dive in, man, and go see it. Swim around. You'll be okay. ~ Stana Katic
utahscubadiver.com Utah's resource for local diving

You can't name her Bastet. That's a cat goddess!
Come with me and Peter to the Philippines this fall!
A journal of my open water class (from 2005) can be read here.
Okay, you've heard all our opinions. Want to know what the science is? http://archive.rubicon-foundation.org/
About GUE Fundamentals versus Intro to Tech: "ITT informed me that I was expected to donate my long hose whereas Fundies beat me into actually doing it, thirty times, halfway through shooting an SMB, upside down while swimming backwards in sulphuric acid."
J

If she's black and tan, I vote Guiness.
You must log in or register to reply here.