Welcome! I'm prone to seasickness, but I've been able to manage it well enough to get in dozens of boat dives a year. I take Bonine/meclizine the night before and the morning of, as others have suggested. I keep ginger gum in my bag and chew it as soon as I feel the slightest discomfort. Carbonated beverages can also help settle a queasy stomach. I bring a jacket (might not be necessary in Florida) so I can stay outside; the breeze in my face helps a lot. I also find that the more I go out on boats, the easier it gets. Hang in there!
OP

No seasickness and all dives went well. Was a bit rough out there too, multiple people got sick. Took pill night before and morning of and stared at the horizon or at the light house. Hubby got sick after first dive but was good once he was back in the water. Did a total of five dives during the week: Elbow reef with Horizon Divers
two shore dives off of John Pennekamp Cannon Beach and
a drift dive at Bahia Honda that we had to cut short too much current and out of my comfort level. 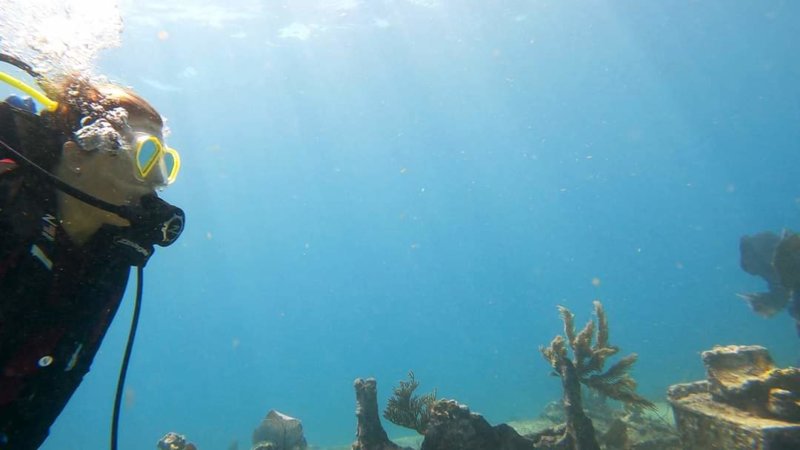 Thanks for the update and glad to hear it went well!

Julie K:
Took pill night before and morning of and stared at the horizon or at the light house. Hubby got sick after first dive but was good once he was back I'm the water.
Click to expand...

What kind of pill did you use? Did your husband use medicine, too? I ask because it may be of interest to future divers who find this thread.

drrich2:
What kind of pill did you use? Did your husband use medicine, too? I ask because it may be of interest to future divers who find this thread.
Click to expand...

drrich2:
What kind of pill did you use? Did your husband use medicine, too? I ask because it may be of interest to future divers who find this thread.
Click to expand...

Also used it for the fishing charter we did on Thursday. That was a little rough too with Fred coming in. Worked like a charm.

Julie K:
Took this...one the night before and one the morning of.
Click to expand...

On closer look, toward the top of the packaging in your photo, it says Meclizine Hydrochloride (and more centrally, 'less drowsy'). That's a medication used for vertigo and motion sickness; it's the active ingredient in Bonine, which you may hear of as a popular relatively non-sedating anti-motion sickness medication.

I believe the original Dramamine main ingredient was dimenhydrinate, which was more associated with sedation.

I point this out because some people may take a glance, say 'Oh, Dramamine, yeah, I've heard of that,' and go get the original (not realizing it's not what you used).

Similarly, the brand name Tylenol is practically synonymous with the active ingredient Acetaminophen, but some Tylenol-branded products have other things in them.

My point (not necessarily to you, but newbies who may run across this thread later) is to pay attention to the active ingredient, not just the brand name. A lot of people already know this, but if just one didn't think of it...
OP

You are correct Dramamine (meclizine) may be confused with Dramamine (dimenhydrinate).

Chose the meclizine over the later because the dimenhydrinate is associated with tachycardia, which I do get with some antihistamines. Way less side effects with the Meclizine. Hubby also takes blood pressure medications so had to watch the drug interactions. Always need to consider the mechanisms of action, side effects and drug/drug interactions with any OTC medication you might be considering.
Don't dream it, do it.
-Jules
You must log in or register to reply here.

Hello From Illinois to Florida
2

Hello from The Big Sky...