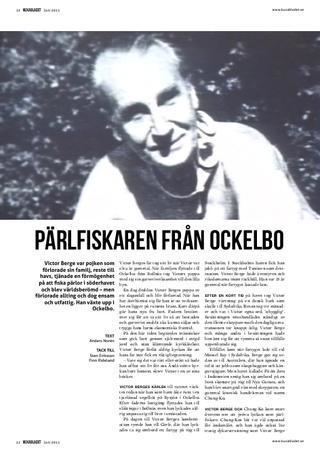 Victor Berge (1891 - 1974) was a pioneering diver of the early 20th century, raised in the Swedish town of Ockelbo, "a little village in the pine forests of Gestrickland" according to a description in "Pearl Diver". After his father died at a young age, he eventually went to sea, where he spent the next forty years diving in the Pacific. Two books chronicle his life, "Pearl Diver" (1930), which covers his life up to 1930 or so, and "Danger is My Life" (1954), which chronicles his life up to that point, and through World War II (when he was captured and imprisoned by the Japanese). After the war he returned to Sweden, where he died in 1974 in Stockholm. In line with his instructions, he is buried in Ockelbo. 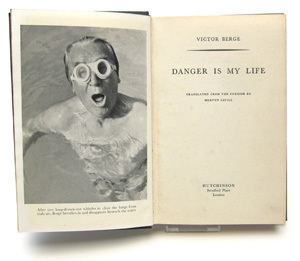 He claimed to have invented the diving mask 'now used in salvage operations all over the world.' On March 4, 1941 he filed his patented diving mask and apparatus designs (U.S. Patent 2303155). The Berge Mask was produced by the Ohio Rubber Co., and came with either a modified aviator's regulator or free flow. During WWII the Berge Mask was part of the USN Standard Shallow Water Diving Outfit. 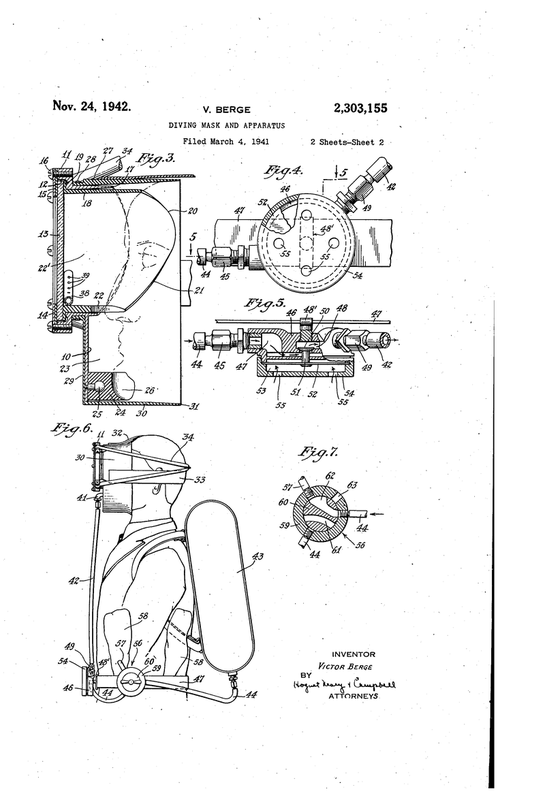 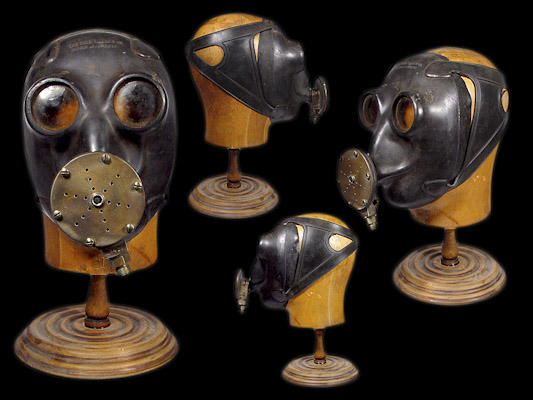 2. Due to the delay caused by changing to a new outfit, it was impossible to furnish the new shallow-water outfits to a great number of activities requiring them. Therefore, various activities improvised diving outfits from service gas masks.

3. The Bureau does not recommend the use of the shallow-water diving mask below 36 feet, except in special cases, and then only by trained Divers. Ascent from depths of 36 feet or less may be made up the ascending line at a rate not greater than 50 feet per minute. Divers are cautioned against throwing off the mask and swimming to the surface.

4. In addition to diving on air, pure oxygen may be used as a breathing medium up to 40 feet.
However, pure oxygen should not be used to greater depths, due to the toxic effect of oxygen.
Individual tolerances vary greatly, and individual susceptibility should be determined.

5. Shallow-water outfits are furnished to activities that do not have specific diving duties assigned, but have small and necessary jobs to accomplish at infrequent intervals, such as
clearing a hawser from a ship’s screw, cleaning strainers and scuppers, cleaning the
ship’s bottom, searching for objects lost in comparatively shallow and warm water.
However, during extensive operations, such as battle-damage repair, salvage, or any work that necessitates the Diver working inside the ship a deep-sea diving outfit should be used. When diving in areas where there is extensive damage, or where wreckage exists, the Diver wearing a ‘shallow-water’ mask is very likely to sustain serious physical injuries, particularly about the head. ‘MDV Gaillard must always wear Deep Sea gear!’

6. All masks should be equipped with the non-return or check valve on the supply line at the same or lower level than the mask, since squeeze resulting in rupture of the blood vessels of eyes, nose and lungs, etc., can occur at any time the pressure in the mask falls below the surrounding water pressure.

7. When diving in cold water the objective is to reduce the circulation of water around the skin. This can be accomplished bywearing heavy underwear or by using a coating of heavy grease.

8. While very satisfactory results have been obtained with the gas mask, it should be remembered that the gas mask diving outfit is an improvisation, and the mask has been furnished for a definite purpose other than diving. However, the Bureau does consider the gas mask to be a very satisfactory substitute for the standard mask. — BuShips. P.W. Hains.”

The Berge Diving Mask by Des Williams
During World Wars 1 & 2 many apparatus and machines grew out of the fertile minds of inventors, proving that necessity is indeed the mother of invention. These periods of war have produced some of the most amazing improvements to existing machinery and provided chemical substitutes for materials urgently needed, for example, synthetic rubber. One particular item to come out of WW2 was the diver’s full-face mask. This particular diving mask has interested me for many years, after coming to my attention during research into my last book Wrecks of War about Australian salvage divers.

The Berge mask was provided by the USA to its allies all over the world during WW2, under the Lend-Lease scheme of military support and was used in both the Pacific and Russia theatres. Australian salvage divers, received basic training in the use of the ORCO mask in 1943, before leaving Australia for New Guinea. The apparatus enabled them to break free from the cumbersome standard-dress copper helmet equipment on many difficult salvage jobs.

The Berge mask was invented by a Swedish adventurer, Victor Berge, who spent much of his early life pearl-diving and travelling the world prior to WW2. Berge’s adventures were recorded in his 1954 book Danger is My Life, which can still be found in 2nd-hand book shops and it is a very interesting read indeed.

Berge showed his invention to a friend at the Ford Motor Company in the USA in 1941, where some improvements to the demand-valve were carried out before Berge had 50 masks produced to take with him to Indonesia that year. Before leaving the USA, he demonstrated the mask to US Navy top-brass, who were impressed with its versatility and simplicity. Berge did not patent the mask design before rushing off to Indonesia, unfortunately for him, just as the Japanese entered the war.

Berge’s timing was bad, the Japanese soon incarcerated him as they swept through SE Asia and over the following four years he was brutality treated and tortured by his captors. He was very lucky to survive the war! His family and friends in the USA in the meantime, having heard nothing of him during the war years, presumed he was dead.

Upon entering the war late in 1941, the US Navy decided to utilise Berge’s unpatented design, especially as they could not make contact with Berge himself. The masks were produced in Willoughby Ohio, by the Ohio Rubber Company and branded the ORCO Diving Mask. A small instruction manual accompanied each mask turned out and they were provided under the Lend-Lease arrangement throughout WW2 in the Pacific and Russian war theatres.

The moulded rubber full-face masks were secured by straps retained by a buckle at the back and were fitted with unbreakable, tempered glass eye-pieces. An air ‘demand’ membrane-type valve on the front of the mask opened to provide air only when the diver breathed in, just like modern scuba apparatus. A distinctive feature of the Berge (ORCO) mask was the double redundancy air-supply mechanism. The demand valve had a push-button arrangement on the front, allowing the diver to force air into the mouth-piece, which is today an integral part of modern scuba gear and referred to as the purge-button. Alternatively, by operating another fitted by-pass valve, a continuous flow of air around the diver’s face could be provided, with the surplus air simply exiting around the fringe of the mask.

Air supply was usually provided by medium pressure, surface-supplied air hose (simple oxygen hose) from a set of high pressure air-bank storage cylinders, via a pressure reducer or from a manual air pump. 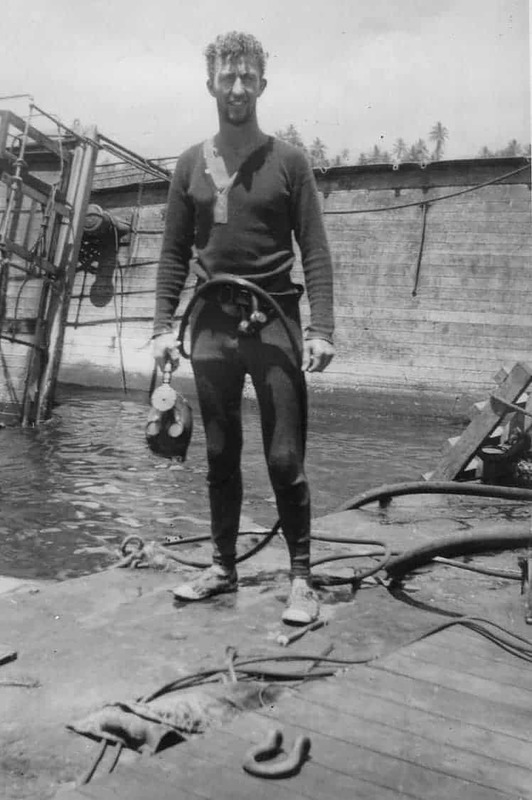 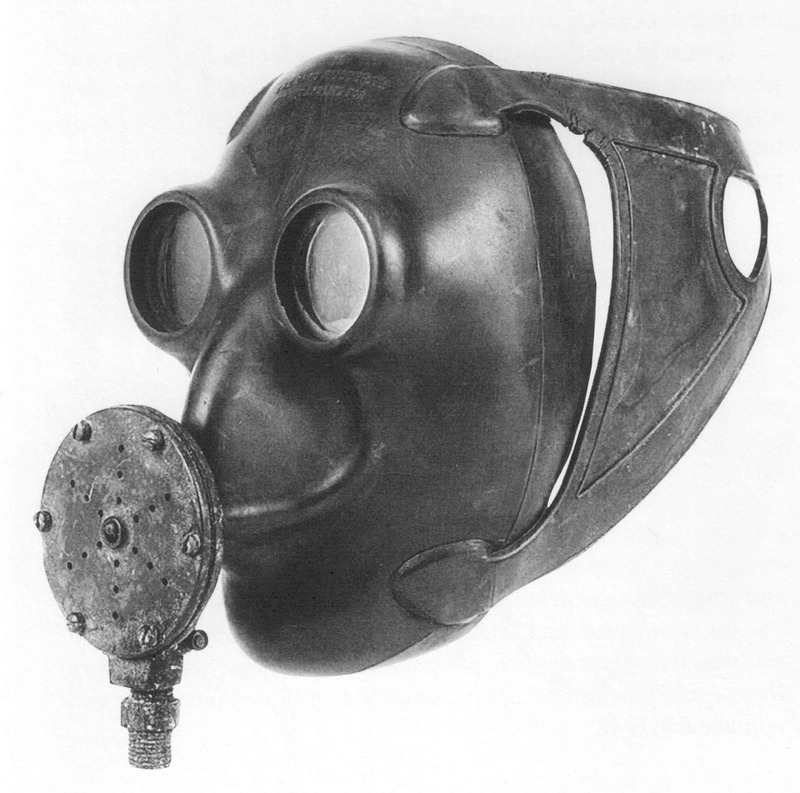 I purchased the 1930 book manty years ago -- almost mint except for the aging
Need to read it !

Our local diving history museum put together by Jon Council has one
Dr. Bill: I once had a 6-pack but now I have a full keg... well, maybe just a pony!
Dr. Bill: Not THAT kind of doctor... but I'll take a look at it anyway!
Kelp forest marine life images, DVD's for sale, and archived "Dive Dry with Dr. Bill" newspaper columns
Single or Buddyless? Check out SingleDivers.com or PM me!

The American edition of the Pearl Diver book is as follows;

Thanks again for your very informative historical valuable post

Neat stuff! You always seem to find interesting data to share with us and I thank you for this!
Happy at 36,000 ft or under 30m
SSI Search and Rescue
PADI First Aid First Responder
PADI Nitrox
PADI AOW

"….Upon entering the war late in 1941, the US Navy decided to utilise Berge’s unpatented design, especially as they could not make contact with Berge himself. The masks were produced in Willoughby Ohio, by the Ohio Rubber Company and branded the ORCO Diving Mask. A small instruction manual accompanied each mask turned out and they were provided under the Lend-Lease arrangement throughout WW2 in the Pacific and Russian war theatres.....'

The history of the Berge diving mask and Des description is very educational.

However in 1941 ,(77 years ago) Frank E Thompson of TECO began working on a shallow water unit in conjunction with the USN. In 1944 he published a book (aka training manual) which was later revised in 1969 - Neither books mentioned Berge, his ORCO mask or the Ohio based manufacturer -- Makes one question WW 11 cooperation ? 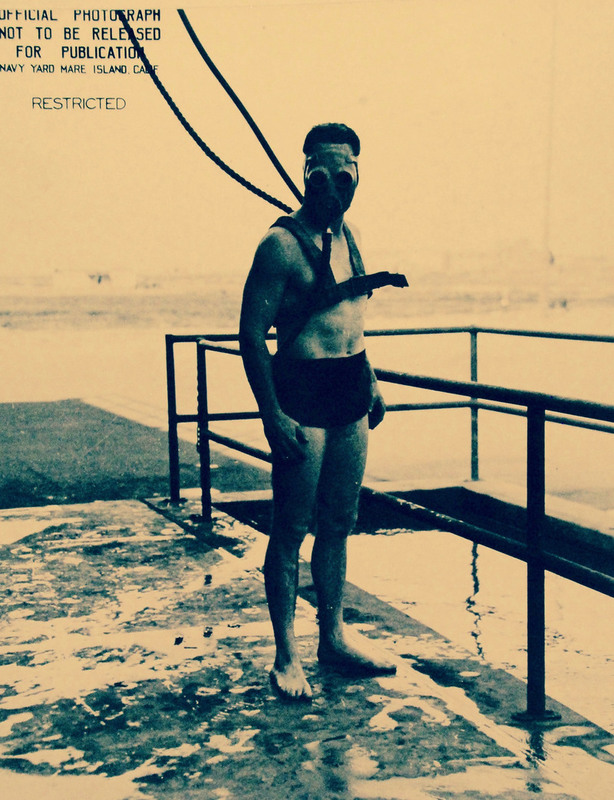 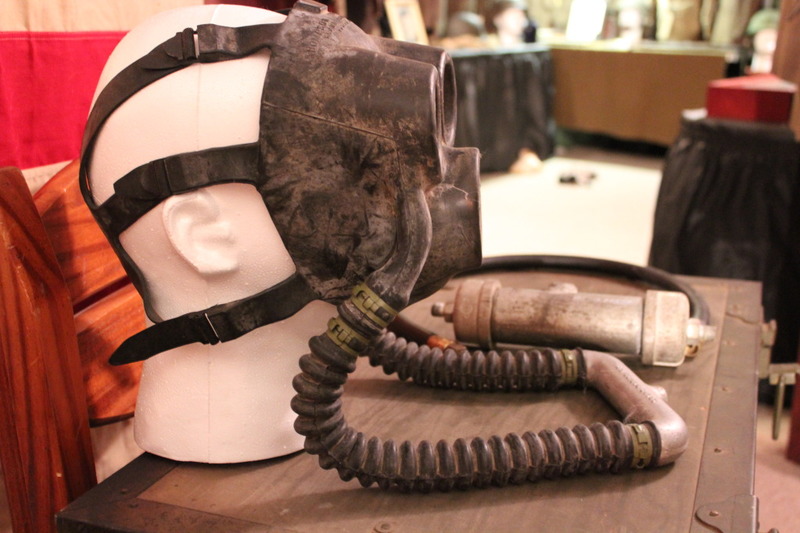 world is rolling to the chasm
call me Alex 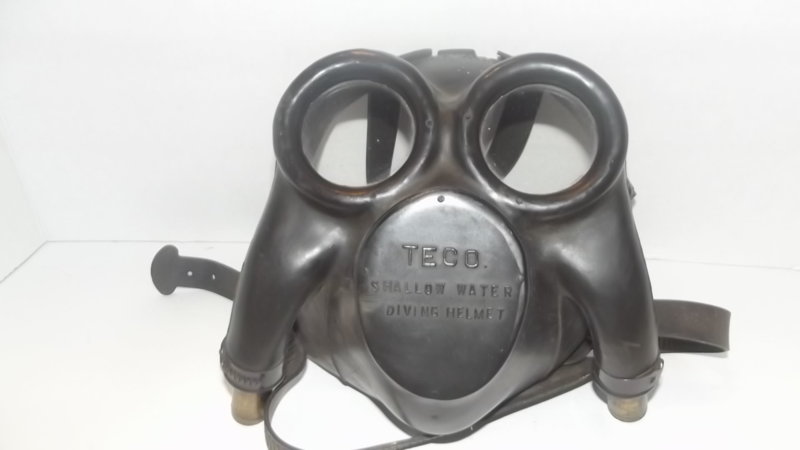 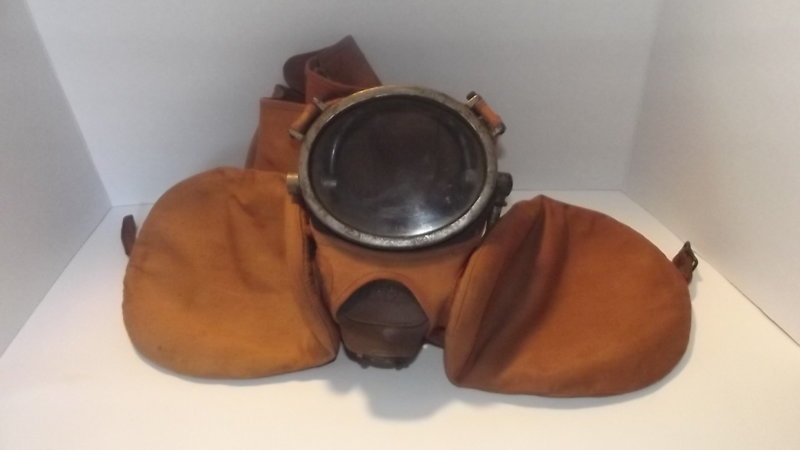 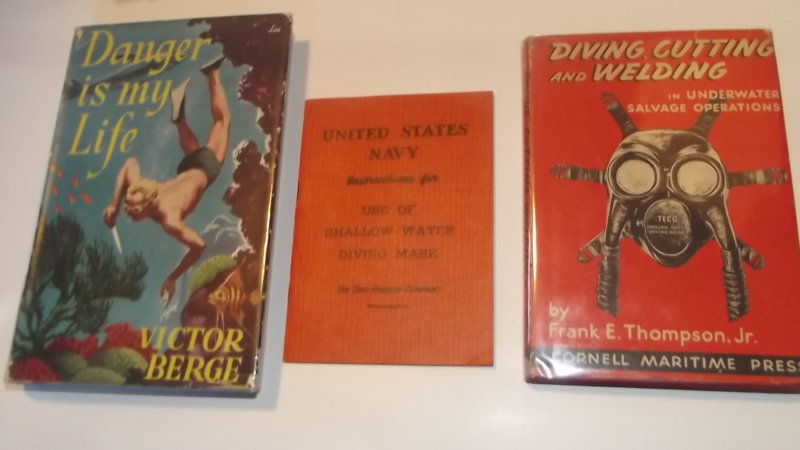