Many Homo sapiens believe in using chemical attractants to entice members of the opposite sex. The ladies use perfumes with various fragrances while the men douse themselves with Old Spice and other after shaves. Personally, I've never found the scents produced by the likes of Versace, Michael Kors or Chanel to be very appealing. I much prefer natural scents like pheromones. Maybe it's just my animal mind.

Many species utilize pheromones to attract their mates. Back when I was teaching my animal behavior class at the old Toyon School, this was a topic I covered pretty extensively. The female silkworm moth releases bombykol, a complex alcohol, to attract a mate. Sadly some male humans think alcohol is a sex pheromone as well... either used on the female to reduce inhibitions or used on themselves to increase the attractiveness of a female at last call.

Androstenol in the sweat of males is an attractant to women, although after it sits for a while exposed to oxygen, it becomes androstenone which repulses most women. Female estratetraenol can turn a man into a... hmmm... animal. I didn't think most males needed any help! Personally, I am attracted to a lady with a brilliant brain... but then my sense of smell is pretty poor.

In my research for this column, I discovered that there are ways for humans to increase their level of sex pheromones. Many have heard that oysters may be an aphrodisiac, but did you know that they are rich in zinc which also stimulates production of male pheromones? I just ordered a jar of zinc tablets from Amazon. Celery can also generate a similar effect. For the ladies, consumption of papayas may work.

As a kelp forest ecologist, I thought I knew almost everything about our giant kelp (Macrocystis pyrifera). Recently I learned there was a whole area of knowledge about that species I was unaware of! Always fun to learn something new.

Now giant kelp reproduces in two different ways. The large "plants" we see in the kelp forest, growing up to about 200 feet in length, are sporophytes. They produce spores in modified blades at the base near their holdfast. These spores are released into the water. Since they are located near the bottom of the water column, they don't disperse far and wide thus ensuring the regrowth of that forest.

However, the tiny spores grow into sexual plants known as gametophytes. Most divers never see this generation because they are tiny and require a microscope. Even I don't carry one of those underwater when I dive. The gametophytes produce sperm and eggs that upon fertilization develop into the massive gametophytes.

Now I knew all that of course. What I didn't know is that these tiny "male" and "female" gametophytes use sex pheromones to help ensure fertilization! The female releases a pheromone known as lamoxirene with her eggs. This chemical stimulates the male gametophyte into releasing sperm. The sperm then follow the lamoxirene trail to the egg. Yes, the natural world is full of interesting chemicals that induce all sorts of behavior... and misbehavior... in different species.

Image caption: Sporophyte generation of Macrocystis pyrifera and sporophyll where spores are produced; male and female gametophytes (courtesy of Dr. Ray Lewis) and the chemical seduction of the male! 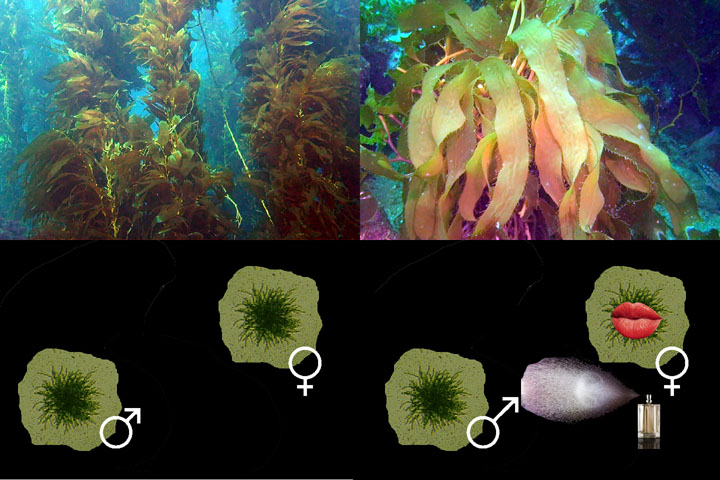