Come spring I often find a lot of what look like pumpkin seeds on hard surfaces at the bottom of the dive park. Halloween is long gone so they aren't the work of underwater pumpkin carvers. Oh, how I used to love scraping out those pumpkin seeds and chowing down on them! Add a little pumpkin pie and whipped cream and I was in heaven. Well, not quite as I was topside instead of underwater!

But these "pumpkin seeds" aren't what they seem. They are the egg capsules of a local snail known as a Kellet whelk (Kelletia kelletii). These gastropods have a very thick shell that is usually white or tan but can be different colors due to algae growing on it. The foot is orange to yellow in color. They may reach nearly 7" in length, making it one of the largest species in our waters.

This snail is found from Monterey into Baja California in depths ranging down to about 230 ft. Habitat preference is for rocky bottoms and kelp forests but they may also be seen on sand or mud.

Kellet whelks are scavengers. I have seen them feeding on a variety of dead fish including a bat ray. They will also enter lobster traps to chow down on the bait inside. They have a very long, extensible proboscis that can extend into small cracks to feed. In addition they will feed on sea urchins, limpets and other species of snails.

They are a slow growing species and a 3.5" specimen may be 20 years old. Females are sexually mature at a little over 2.5" in length. Fertilization occurs internally and the embryos are laid inside the egg capsules. Spawning occurs from March to May. Upon hatching the larvae disperse in the plankton for an undetermined time. Populations need to be fairly dense as mating is done in aggregations as seen in the image.

Predators on these snails include octopus, sea stars, Moon snails and sea otters. Reproduction can be dangerous for the Kellet's whelk. Since they usually aggregate in fair numbers when mating, they create a tempting smorgasbord. Several times I have observed giant (aka knobby) sea stars (Pisaster giganteum) atop a mating cluster with its tube feet firmly attached to several of the snails.

Native Americans fed on this species as I have witnessed during our analysis of archaeological middens here on the island back in the late 1960s and 1970s. There is a modern day commercial harvest as well, limited to about 100,000 lbs. A reported 98% of the take comes as incidental by-catch in lobster and crab traps. I've never tried eating one. With my culinary "skills" it is probably safer that way.

Image caption: Two Kellet whelks and one laying a cluster of pumpkin seeds; a clear shot of the eggs and a cluster of mating individuals; rocks covered with eggs and some attached to a golf ball! 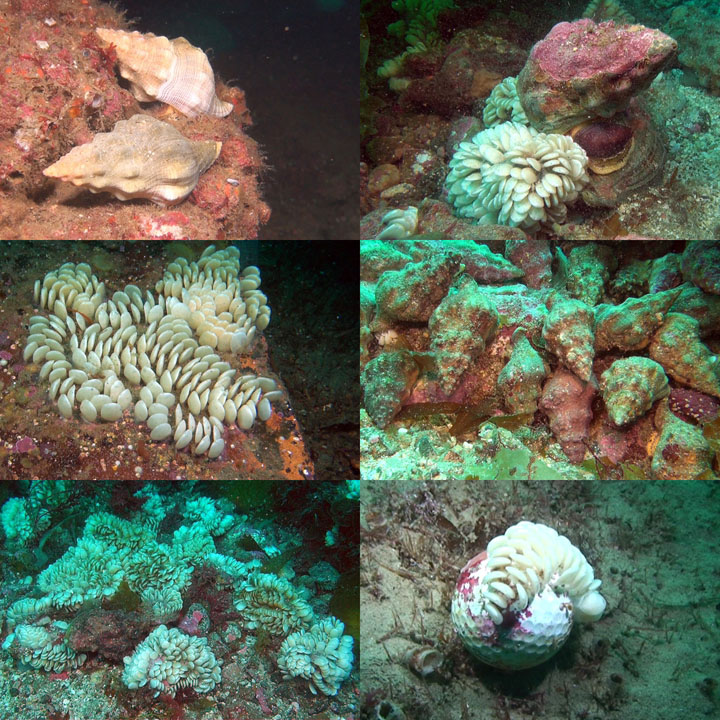 I always assumed they were eggs of some sort but had no idea which critter they belonged to. Thanks.
Click Here: ScubaBoard needs your help...​

Please keep sharing with us.

" . . . the most singular difference between happiness and joy is that happiness is a solid and joy is a liquid." (partial quote from J.D. Salinger)

Hi @drbill, I'm sure I'm not the only one missing you and hoping you are doing OK. Haven't seen you for a while.

Bill
Glad to see you are still researching, writing and sharing-- Hang in ole bean

Many years ago I had a diving student who had been raised in Italy. On one of the checkout dives in Laguna he became excited when he spied a number of Kellets Welks and picked up a few.

On the beach, during the debriefing he explained that the meat of this shell this was very tasty and a staple of cooking in his home town in Italy. His name for the shell was something like " Squnangilli : ( Italians Help !!)

Sometime later I my wife and I were invited to his home for dinner featuring fresh Kellets whelk in a very rich white" Italian flavored sauce." It was fantastic! It was memorable! Many times, my wife attempted to duplicate the sauce but never succeeded-- in retrospect I suspect it was the cooking time and the herbs and spices that added that certain Italian flavor

During that period long before NAUI or PADI was created and you were in Chicago there was a diving lecture circuit. similar to the modern Zooms, which I was active with a number of programs which I presented to Dive clubs, LA Co UICC as well as there ADPS ,

One of my very popular programs was Keepen Keepers - how to clean preserve and display marine life .

A popular component my presentation was Kellets whelk, When cleaned the shell is chalk white. Serendipitously my children who were very inquisitive and certainly inventive decided to drop a kellets whelk in easter egg dye -- Surprise! The welks absorbed the dye and became a part of my daughter's rooms decor

That was then-- in the genesis of recreational diving.

We are NOW -- I do not prescribe to the taking, displaying or consumption of marine life
Time to preserver what remains for the future

I saw today that Dr. Bill died. We are all a little better for his passion and knowledge.
You must log in or register to reply here.