Last winter Packy and Wendy Offield's daughter Kelsey contacted me. An artist friend of hers was working on an exhibition of his work for the Museum of Contemporary Art in Los Angeles entitled "Electric Earth." She said he also wanted to create a series of underwater "pavilions" that could be placed in the waters off Catalina. His interest was in establishing a link between his artistic projects and the world beneath the ocean's surface.

I said I'd be interested so Kelsey put me in touch with the artist, Doug Aitken. I found Doug to be enthusiastic and inspirational in his description of the project. I don't know much about art myself... the only pieces a divebum like me can afford are my own photographs and a few Danny Petersons... but the project was unique and intriguing.

Doug sunk the hook in me when he mentioned that one of my icons, Dr. Sylvia Earle ("Her Deepness") was also interested in the project. Sylvia is a passionate and effective spokesperson for the marine environment. Back when I was an undergrad at Harvard, Sylvia was a researcher there. She moved to southern California the same year I did (1969). We worked together on several of Jean-Michel Cousteau's Project Ocean Search programs and Sylvia even served as a board member at the Catalina Island School where I taught marine biology.

A project like this involved dealing with politics as well, something else I'm not good at. However when we presented the concept to the Avalon City Council many months ago, we received unanimous support from them. We also had to verify that the project would not negatively impact the marine protected area in the dive park. I took GPS readings to help determine that and then did a video survey of the ocean floor to illustrate the habitat where the pavilions would be anchored. The California Coastal Commission agreed that the project would not have negative impacts and would be an interesting addition to our coastal waters.

Once the approvals were obtained, Doug focused on the design and fabrication of the underwater sculptures. Thanks to Sylvia Earle's early interest in the project, Doug partnered with her company, DOER (Deep Ocean Exploration and Research) Marine with her daughter and DOER President Liz and son-in-law Ian leading the work on the project. Their vast experience in a wide range of ocean projects and engineering made them an excellent choice to help the project succeed.

Over the last two weeks, the assembly and installation of the pavilions in the dive park was concluded. The assembly took place in our local boatyard with help from Caleb Lins and team. Caleb also handled transport of the assembled pavilions to the hoist at Cabrillo Mole where they were first tested for flotation and then transferred to the Avalon Mooring Service's boat Can-Do for installation in the dive park.

Another partnership established by Doug Aitken was with New York-based Parley for the Ocean, headed by founder Cyrill Gutsch. Parley focuses on forming collaborations with other organizations to deal with issues affecting the marine environment. One of their main issues is that of plastics entering the marine environment. An excellent example of their cooperative work is the manufacture of sneakers by Adidas using plastic recovered from the ocean.

Both KCET and the New York Times had teams out on the island to cover this project. KCET and Parley did extensive filming of the fabrication and installation. They conducted interviews with Doug, Cyrill, MOCA director Philippe Vergne, myself and others. I was talking to one of the underwater videographers who said he would love to film a sea lion interacting inside one of the sculptures. The next day we got his wish and was very excited about the footage he shot. The New York Times article appeared about two weeks ago.

SCUBA divers and snorkelers have been swimming out to the sculptures for several weeks now. I have been spending time at the dive park asking divers how they felt about the experience. The responses included "fantastic," "really fun," "cool," "really, really neat," "we loved it" and "reminded me of Space Odyssey 2001." I'm chafing at the bit for my surgeon to clear me to dive on them!

Image caption: Pavilions at boat yard, at Cabrillo Mole, being installed in dive park and local instructor Mark Guccione diving on one. 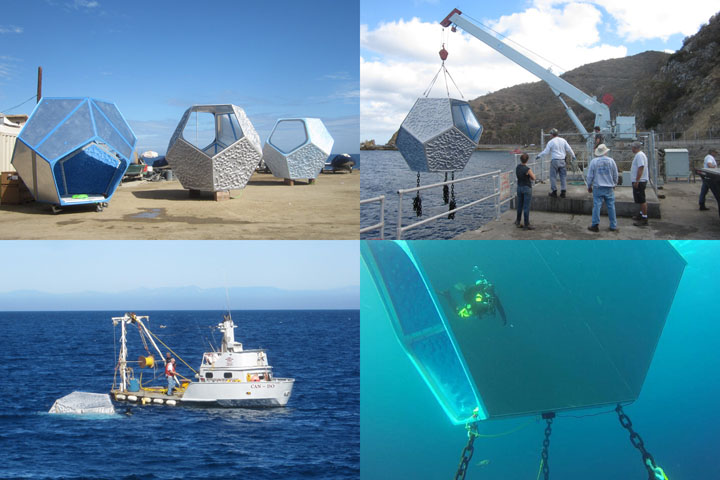 How long are the pavilions going to be there?

laikabear said:
How long are the pavilions going to be there?
Click to expand...

Good question... the original permit was for three months with the possibility of extensions, but they were planned to go in in Sept. Since they didn't go in until November, they should be here into Jan or Feb
Dr. Bill: I once had a 6-pack but now I have a full keg... well, maybe just a pony!
Dr. Bill: Not THAT kind of doctor... but I'll take a look at it anyway!
Kelp forest marine life images, DVD's for sale, and archived "Dive Dry with Dr. Bill" newspaper columns
Single or Buddyless? Check out SingleDivers.com or PM me!

We're looking for volunteers who can come out and clean the polished aluminum ("Mirror") surfaces. Free air fills and cleaning supplies will be provided. Volunteers can commit to a single visit during the time they are in... or to several if they desire. Please contact me via e-mail (bushing@post.harvard.edu)
Dr. Bill: I once had a 6-pack but now I have a full keg... well, maybe just a pony!
Dr. Bill: Not THAT kind of doctor... but I'll take a look at it anyway!
Kelp forest marine life images, DVD's for sale, and archived "Dive Dry with Dr. Bill" newspaper columns
Single or Buddyless? Check out SingleDivers.com or PM me!

My wife and I are looking at coming over to dive the week after Christmas, if we do we would love to do a dive to help with maintenance. I will make contact when we know for sure, but saw them on a youtube video they are so cool looking.
It's not the Agency its the Instructor and student
You must log in or register to reply here.