couv:
LBTS is one of my all time favorite shore dives.

Also pre- keeping fins and hands off bottom?
" . . . the most singular difference between happiness and joy is that happiness is a solid and joy is a liquid." (partial quote from J.D. Salinger)

couv:
Snug Pack-grandfather of the Freedom Plate. Mine did not have a quick release cam band. I had to wrestle with a screwdriver to loosen the band on mine, often on pitching seas. Rich guys had two backpacks.
Click to expand...

I can't believe you are looking at the backplate.

I'm looking at the reg second stage instead. I've seen a couple of photos with straps like this for securing the reg to the head, but was this something a regular diver would use?

couv:
Snug Pack-grandfather of the Freedom Plate. Mine did not have a quick release cam band. I had to wrestle with a screwdriver to loosen the band on mine, often on pitching seas. Rich guys had two backpacks.
Click to expand...

I didn’t notice she was wearing a snug pack.... I have one on my steel 72. It does have the quick release and a nice little guide for the J-valve reserve. The handle is really handy.

I loved the subs on Voyage to the Bottom of the Sea, especially the mini subs. Barbara Eden was in the movie version and Barbara Bouchet is the woman being helped into the Snug-pack. As far as I can tell, Eden spent the entire movie dry and wearing a version of Navy khakis. For the 1960s fantasy show, it was seriously lacking in the expected misogyny that could be enjoyed on the Wild, Wild West, Man from UNCLE and Sea Hunt. In that respect, a let down.
OP 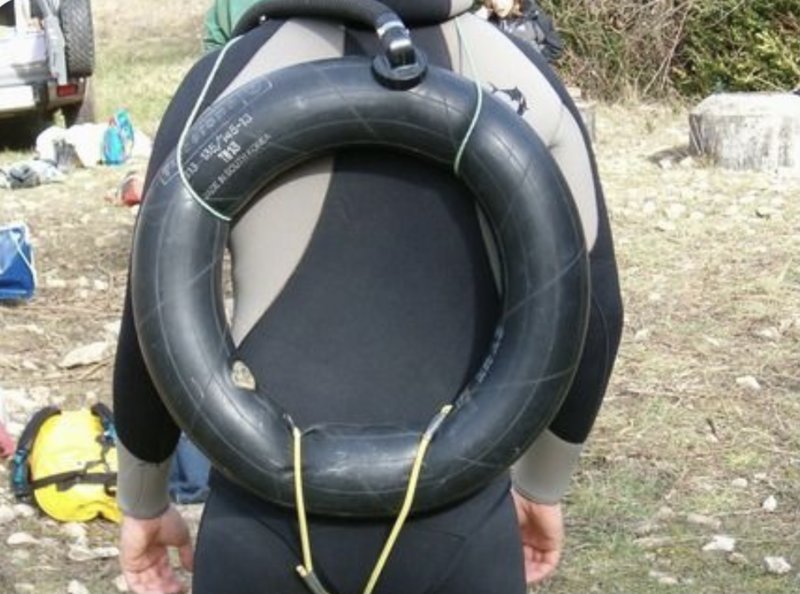 Check this ad out from Scubapro. Beautiful chrome regulator. Can’t make out what it says on the cover. 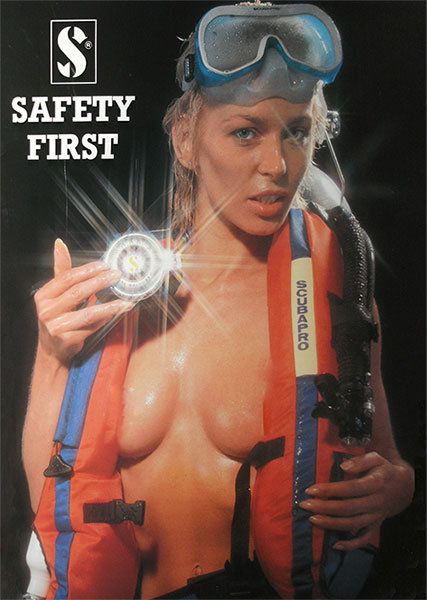 Headlighst blurred my vision Damm it!

Bob DBF:
That was what prompted Scripps, LA county, and a number of others to research, write and publish The Science of Skin and SCUBA Diving in 1958, which I believe was the the best instruction for scuba written. It was revised and became The New Science of SCUBA Diving in 1962. It was republished into the '90s but was replaced by Agency texts.
Click to expand...

The curriculum was heavily influenced by the U.S. Navy's training as Underwater Demolition Teams (UDT) Commander Doug Fane often invited Limbaugh and other Scripps divers to participate with his men. This "boot camp" aspect continued as part of dive training for more than 20 years. Limbaugh's training course became the basis of the first public scuba certification, founded in Los Angeles County by Bev Morgan, Ramsey Parks and Al Tillman after they studied under Limbaugh.15
Click to expand...

Similar to the type from the intro of Sea Hunt?

I still have one. The Desco Jack Browne mask was developed during World War II and never evolved very much. I had to train on it in the Navy but, thankfully, never had to use it after dive schools. It is the same mask shown in the Sea Hunt into.


​
Here is an image of the demand version of the Jack Browne that came along in the 1950s but was even worse: 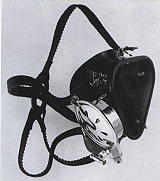 Akimbo:
More information on the Scripps program: Connie Limbaugh got a great deal of information for the Scripps dive training program from the Navy UDT in Coronado.
Click to expand...

The Navy was and is at the forefront of underwater research, and the group putting the book togather wanted the the most up to date and accurate information. The agency OW manuals were largely based on, and to this day use the same information found in that book.

Bob DBF:
The Navy was and is at the forefront of underwater research, and the group putting the book together wanted the the most up to date and accurate information. The agency OW manuals were largely based on, and to this day use the same information found in that book.
Click to expand...

Just to expand the point for other readers:
More than being at the forefront, the world's navies were the only source for reliable information on diving in the 1940s and early 50s. Definitely for documentation, unless you count Sir Robert H. Davis' Deep Diving and Submarine Operations: A Manual for Deep Sea Divers and Compressed Air Workers. Cousteau was in the French Navy and Hans Hass used Dräger rebreathers developed for the German Navy, though close variants were sold for mine safety and firefighting.

What passed for commercial diving before the 1960s could barely afford to replace their patched and leaking deep sea suits. What little they knew, or thought they knew, was more likely to be guarded as trade secrets than written down. The NEDU did a lot of basic research from the late 1920s on but the Royal EDU was not that far behind. A lot of Germany's research was conducted by Dräger, who was and is a huge medical equipment manufacturer.

There is a lot of information on the early evolution of diver training described in the Bev Morgan biography. Even the few commercial diving schools in the US of that era were started by ex-Navy divers.
Click Here: ScubaBoard needs your help...​
You must log in or register to reply here.

D
A shout out to Living Underwater dive op/The joy of bringing a new diver to the sport!