Looking to add a quick disconnect to my FFM and 2nd stage that share a 1st stage. Wanting to carry a spare mask, and reg to be able to switch out if a failure happened and salvage a dive.

Is there one that is considered king of the mountain, or more importantly ones to avoid?

There are basically 2 "standards" on the market.
The Omniswivel CEJN fittings are the standard for FFM's. Nipple on the regulator, body on the hose and they're essentially a giant inflator hose like on your BC. They have been the standard in that world for many years because the nipple is so small. They were the standard in CCR's for a while until they almost killed a couple divers because they made a slight change and they were not compatible in one direction anymore *can't remember if it was new body didn't fit old nipple or vice versa, but doesn't matter*.
When that happened, the CCR world went to Swagelok QC6 and that is essentially the standard for the CCR and cave world. QC6 is advantageous because they are double end shutoff, but are much larger and heavier so you need an intermediate hose between them and your mouth.

The DiveGearExpress ones for like $30 are perfectly fine though and if you think you need them, then I would probably start there since you'll be out $35 instead of $100 for the Omniswivel.

Now, on my actual opinion.
When I dive FFM, my FFM has an omniswivel QC on the mouthpiece that connects it to the switch block, and the switch block has QC6's on it to connect to my tanks *because I have QC6 on all of my regulators for CCR* and for some of the diving that I do it is required that I have a switch block. I always carry a spare half mask, but I don't intend on using the Omniswivel as a QD underwater. If that second stage fails for whatever reason then I switch to the second stage around my neck and abort the dive. Fix it at the surface. If your FFM fails, you should not just continue the dive. Doesn't mean you can't hop up to the surface and unscrew it and put a normal second stage on there, but getting a half mask and second stage out of your pocket and plugging it in to complete a dive is not a smart idea in my opinion.

tbone1004 said:
The Omniswivel CEJN fittings are the standard for FFM's.
Click to expand...

maybe that's what the change was back in the day, they used to be CEJN compatible then there was a slight change. Who's to say. Out of curiosity, are yours compatible with the Omni's or anything else?

I bought a QD and swivel for my FFM from Piranha Dive Mfg. It fitted perfectly with the QD male connector of the Ocean Reef Neptune, and costed a fraction of the Omniswivel QD and swivel.
Tired of such a long Surface Interval.
Eduardo

tbone1004 said:
The Omniswivel CEJN fittings are the standard for FFM's.
Click to expand...

emoreira said:
QD and swivel for my FFM from Piranha Dive Mfg. It fitted perfectly with the QD male connector of the Ocean Reef Neptune, and cost a fraction of the Omniswivel QD and swivel.
Click to expand...

So.... is the Piranha QD a cheaper match for OmniSwivel's CEJN? Or does the Ocean Reef Neptune not follow the standard suggested by @tbone1004 above?

tbone1004 said:
[G]etting a half mask and second stage out of your pocket and plugging it in to complete a dive is not a smart idea in my opinion.
Click to expand...

Location
Same ocean as you! 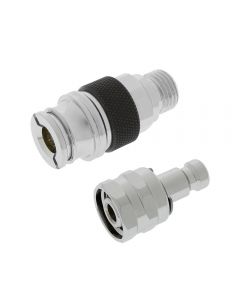 Magnificent!
When in stock!

DGX High Flow QD
20,000 leagues under the sea diving to adventure
in a silent world with my ceiling the waves....Emile