Yeah but I was not hardly breathing and if I remember correctly, when I saw how little air I had at 20 feet and how little he had calmed down, we just went up -with no safety stop.

Not advocating here, but prior to this I had no guilt leaving the bottom with 500 psi - when diving from a private boat. It was a big surprise to me and a reminder of what my instructor told me: " a buddy can be the most dangerous thing in the ocean".

Yeah, that's the thing.
Having a true emergency may be once in a lifetime. And if you're always on top of things, it may never be your emergency.

But the moment you hand over your octo, it's still your air that's getting used up. How do you keep one victim from becoming two? If you're 80 feet down with a big nitrogen load from this and the previous dives of the day, it may not be enough to know that you can do a CESA for the last 40 feet. That N2's gotta come out somehow...
C

@rsingler Applause for yet another contribution to the community.

Ok, I'm going to go out on a limb here and state what must be running through a lot of minds right now. Can we get Shearwater to add this as an AI function with dynamic calculation for real-world multi-level dives.
They are already doing a non-stressed, single diver, slow ascent version with GTR. With a few of your conservatism parameters added (assumed problem solving time, SAC/RMV multiplier {simple enough to double it if you have 2 divers}), they/we could have a RPB pressure and/or STR (Safe? Time Remaining) display.

To be blunt, I'm much more likely to follow the safer path if it is easy and the least penalizing possible.

Appreciate your thought, and I hate to rain on a parade, but Shearwater won't do it. They only do SAC, not RMV, because they don't want to get caught up in the operator error of a diver forgetting to change tank sizes. You could probably do it with just their SAC calcs and some programming, but accounting for the other diver will still make them balk.

But more to the point, YOU know your average RMV. You know how calm you think you can be. You can adjust for a dive that's strenuous or in current. That means that the only variable is depth.

Jot the RBP for your buddy pair (WITH a safety stop) for three depths on your slate.
Jot the RBP for one diver with no safety stop next to it for each if those depths.
It's just a moment's glance. If you're going for a max dive, each time you hit a Rock Bottom Pressure, you and your buddy exchange signals: ascend to a shallower level or burn reserve? But at the point you've hit Rock Bottom Pressure for a single diver and no safety stop at any of the depths, your dive is over. You MUST ascend, because at that point, you're going to arrive with 150psi left in your tank.
It's six numbers. It's three iterations on the spreadsheet. It's your guarantee if you keep your reserve, and it's the little angel on your shoulder if you burn all your reserve, deliberately or by accident.

But like monitoring PO2 for CCR divers, ya gotta look at it.


This is what I've worked out for my rock bottom calculations for various tank sizes.

Standard disclaimer: don't use this; the math is wrong, the assumptions are incorrect if you use this you may die yadayada
Wrecks are my jam.

rsingler:
Appreciate your thought, and I hate to rain on a parade, but Shearwater won't do it. They only do SAC, not RMV, because they don't want to get caught up in the operator error of a diver forgetting to change tank sizes. You could probably do it with just their SAC calcs and some programming, but accounting for the other diver will still make them balk.
Click to expand...

It should be much the same calculation as GTR with an offset (for problem solving) and a SAC multiplier.
Accounting for the buddy is easily done in the choice of the SAC multiplier. Something like:
SACm[w/ buddy] =SACm[stress multiplier] * (1 + RMV[buddy] / RMV[me] )
If your assumed stress multiplier is 3 and your buddy's RMV is close to yours then the combined multiplier is 6. They are a relative air hog ... 7 or 8. They dive hours on an AL63 then maybe 5.
Shearwater doesn't even have to consider a buddy per se.

Overall, maybe not ideal in the strict perfect calculation, but responsive to actual exertion conditions. And easy, just tweak the multiplier once you size up have a pre dive briefing with your instabuddy to determine relative RMV and likely stress response and go diving.

From a liability standpoint, I don't see it as any different than GTR.

-JD-:
From a liability standpoint, I don't see it as any different than GTR.
Click to expand...

I agree 100%! But my support doesn't count.
Maybe start a request thread on the Shearwater Forum and see if they'll add it to their "To Be Considered" list?

Are you suggesting he make a "Cheat Sheet!" What is the world coming to?
Thank you to all who make this wonderful resource available, and to all the thoughtful contributors.

This is dynamite! Thank you @rsingler for creating this calculator. As a new diver, I've been frustrated with the shallow (pun intended) nature of the training I've received up through AOW and Nitrox. Rock Bottom Pressure? Never heard of it. I'm planning my first first descents to +100' and this is super useful. As you said, diving past 50-60 ft really does change the game. I will use this to build a reference sheet for myself and write it on/tape it to my slate. That was the first thing that popped into my mind, even before I read it on the thread. I like slates... All I have to do is look down at my arm.

What is the Initial RMV Safety Factor? Is this a multiplier for how much more air someone/their buddy will use if they are freaking out? As in, normal conditions below would be .7 cu ft/min (close as I can math it from my last dives) x 3 (your standard rec diver panic) = 2.1 cu ft/min (consumption while engaged in recreational panic)? So you can play with this if you have tiny panic (2), or "I hear the jungle drums, I found but just dropped the 'most important sea shell known to man', I'm about to be a fish, and no one is around to give me air" panic (5-6)?


For anyone interested in ponies (the bottles... Put your pinky down), this is what it shows for an AL40 pony bottle when used to ascend from 120' (the standard limit for recreational diving): 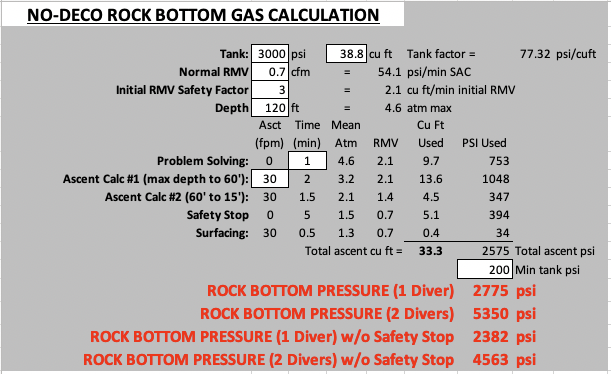 So an AL40 pony is useful for: 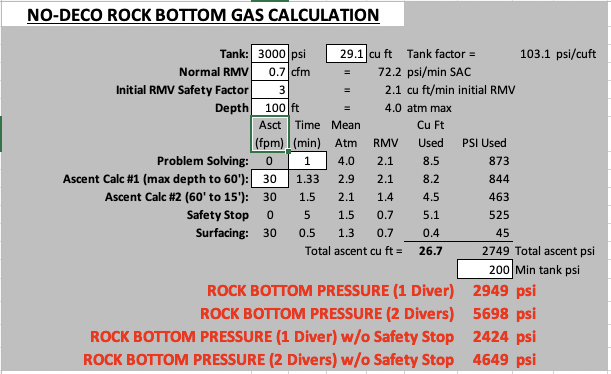 Of course, this is all assuming YOU are (I am) using the pony... If you (or I) hand it off, we better have enough on our backs to make it to sunshine. Nothing like passing off your redundancy only to run out of air shortly after.

EDIT: I also put in 200psi minimum... It's a nice, round number.
"A ship in harbor is safe, but that is not what ships are built for." - John Augustus Shedd
"But more wonderful than the lore of old men and the lore of books is the secret lore of ocean." - H. P. Lovecraft
You must log in or register to reply here.

How to calculate total air consumption along ascent?
2 3 4

Checking tank pressure does BC hose need to be attached?
2