Xtar was kind enough to send me this light to try out. I had my first chance to dive with it today, so I thought I would share my thoughts.

This light has the following specs and/or features, per the manufacture (i.e. I didn't measure or verify these myself):

2 x LED emitters - 1 Cree XHP70.2 P2, and 1 Cree XHP35-HI D4
37.8Wh proprietary battery pack
120 degree flood beam with up to 4200 lumen output
53 degree spot beam with up to 1600 lumen output (but read below, because that spec is completely misleading)
Combined beam for up to 5800 lumens output
2 "hidden" modes for Blink or SOS
74 min burn on High for Flood only
155 min burn on High for Spot only
45 burn on High for Turbo (Flood + Spot)
2 buttons - one cycles through the modes (Flood, Spot, Flood+Spot, Off), and one cycles through brightness levels in the current mode
Threaded hole on the bottom (opposite the buttons) that appears to be ready to accept a standard 1/4-20 camera tripod mount screw
OLED display that shows mode, brightness and estimated burn time remaining
Waterproof to 100m (330 feet)

It comes in a nice, plastic carry case. 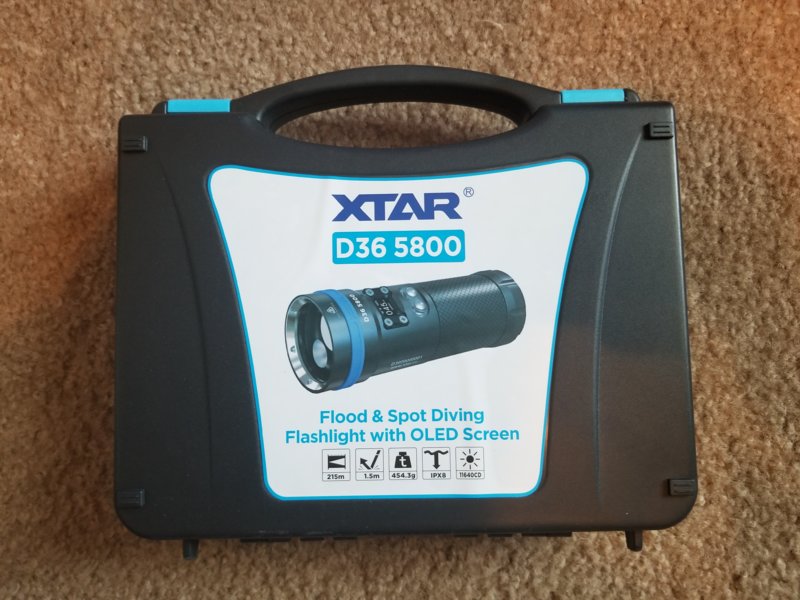 Inside are the light, the battery pack, the charger, a lanyard, 1 spare O-ring, and some basic instructions. My battery pack proved to be fully charged from the factory.

This light is a handful. Some pics with objects for size reference. 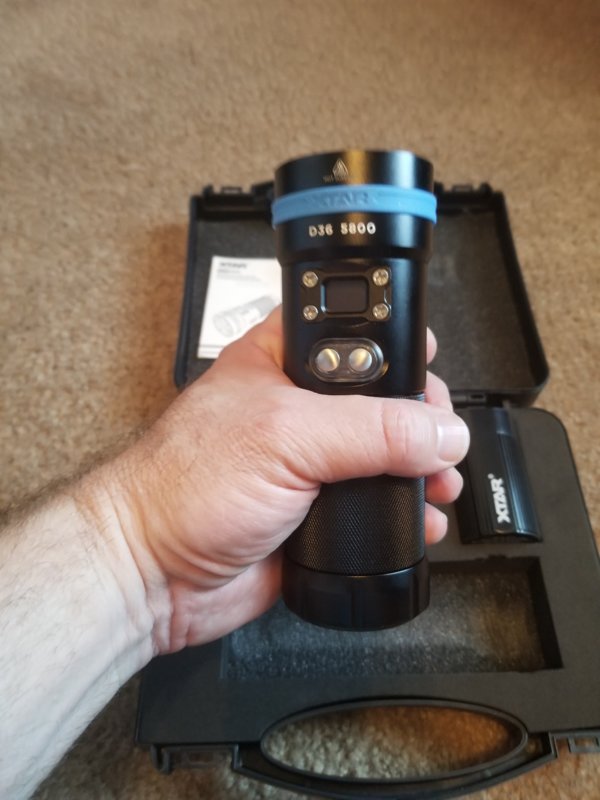 Next to a Shearwater Teric: 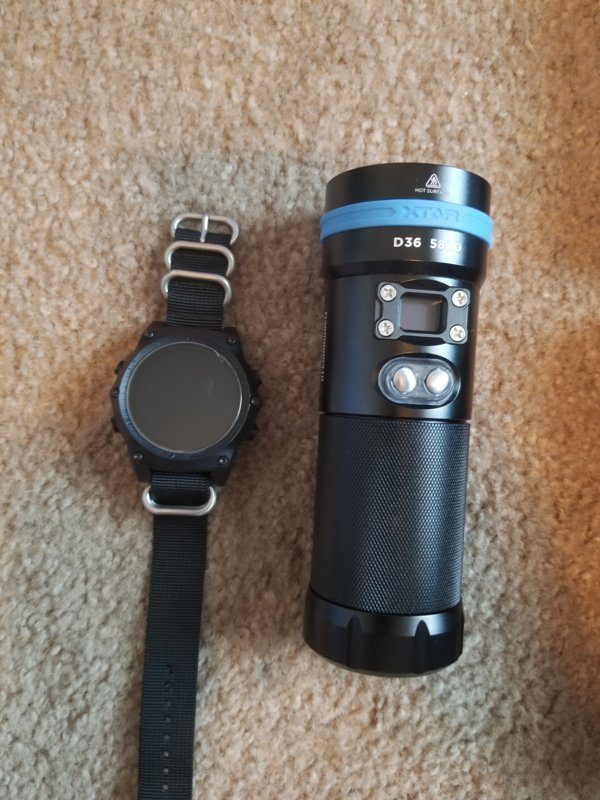 The battery pack, showing the specs and where to connect the charger. 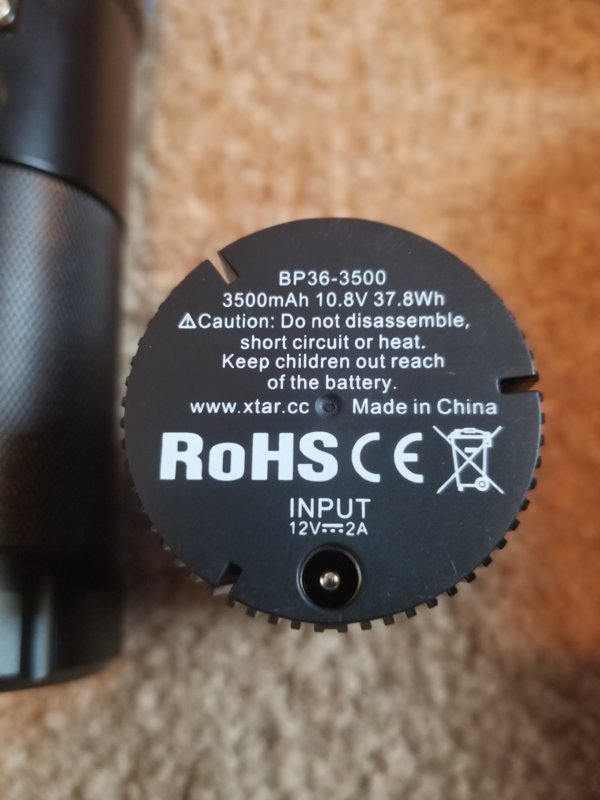 This butt end of the light unscrews so that you can insert the battery pack. The battery pack has 3 recessed areas that contain the power connections. There were no instructions on a particular orientation to insert the battery pack, so I just stuck it in, then turned it and pressed lightly until it dropped into place. The power connections look evenly spaced, so either it's smart enough that it doesn't matter, OR it will only fit all the way in in the correct orientation. 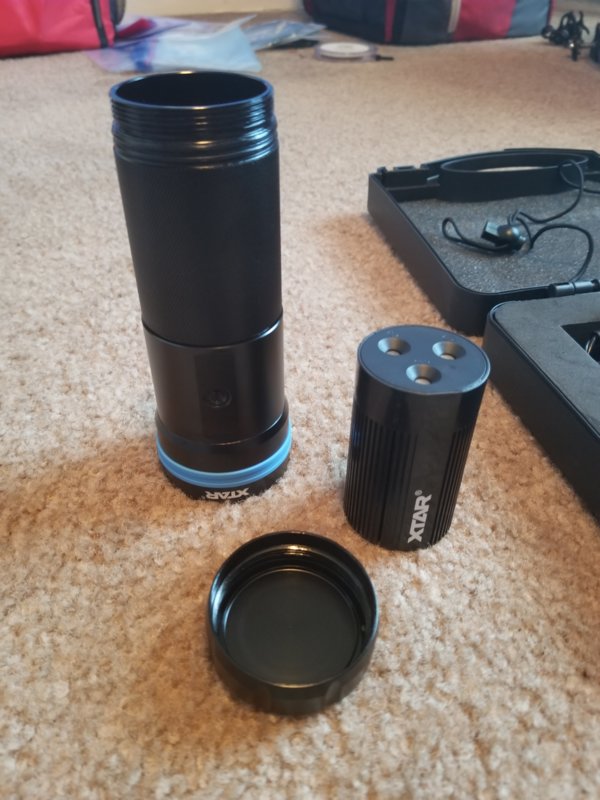 When the light is off, you can press the left button and hold it to see a status on the display. Here, it shows that it is unlocked and at 99% charge. 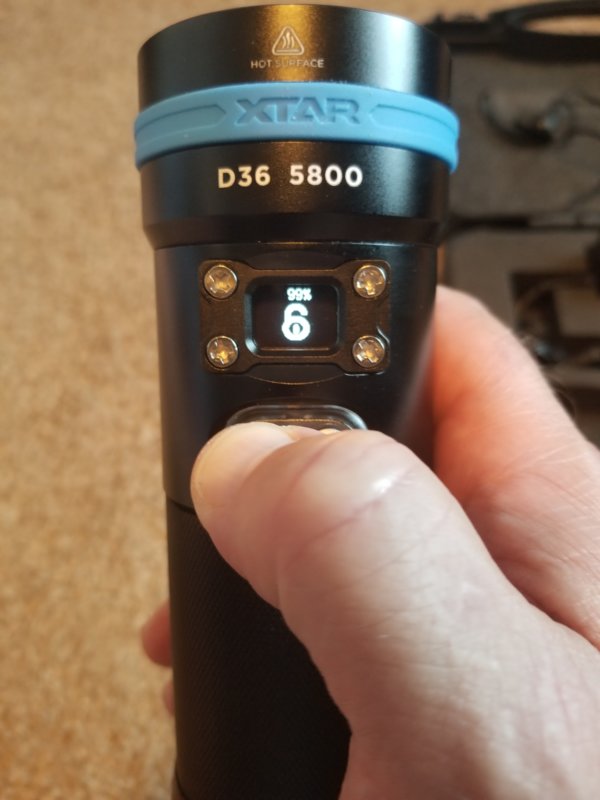 Pressing the right button one time turns it on in Flood mode, on High. Here it shows that it has an estimated 76 minutes left if it continues to run in Flood/High. 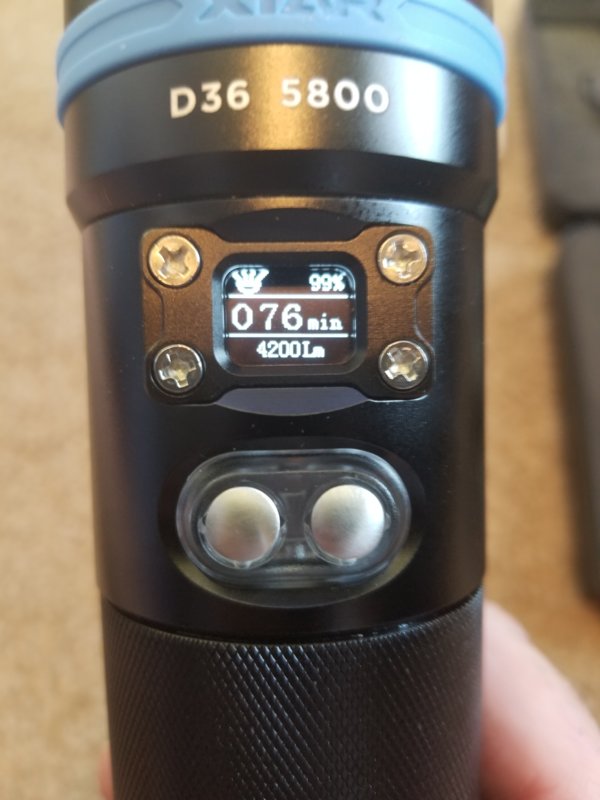 2 presses of the left button and it is in Flood/Low with an estimated 398 minutes of 1200 lumen output. 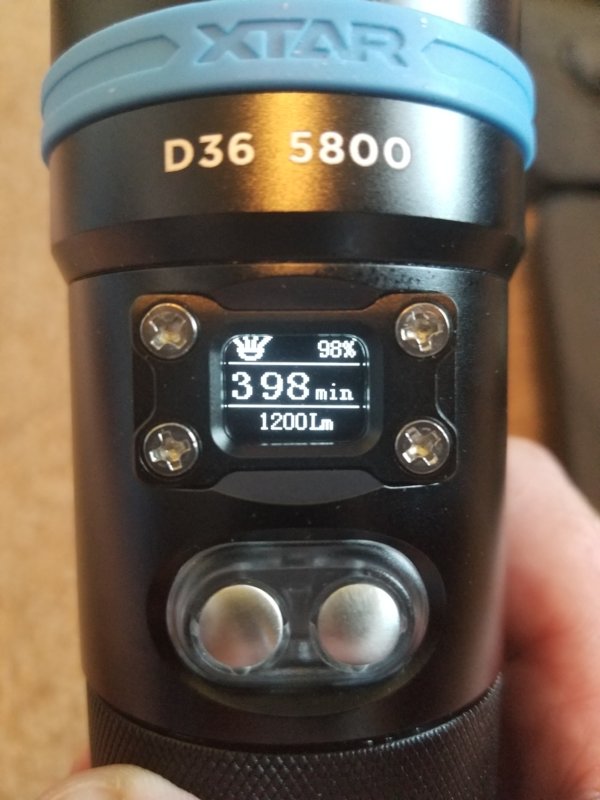 Another press of the Right button and it is in Spot mode, on High, with an estimated 197 minutes of 1600 lumen output. 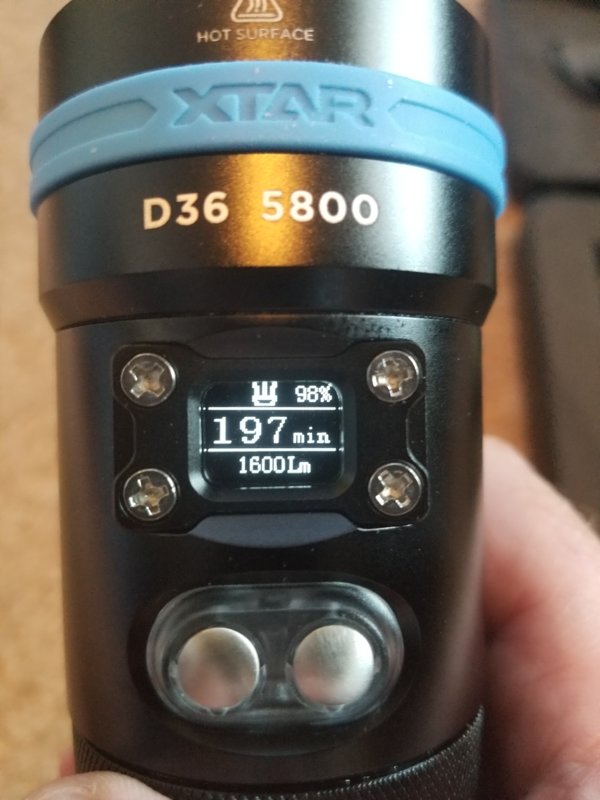 Another press of the left button and it is in Turbo mode (Flood + Spot) putting out 5800 lumens for 53 minutes. 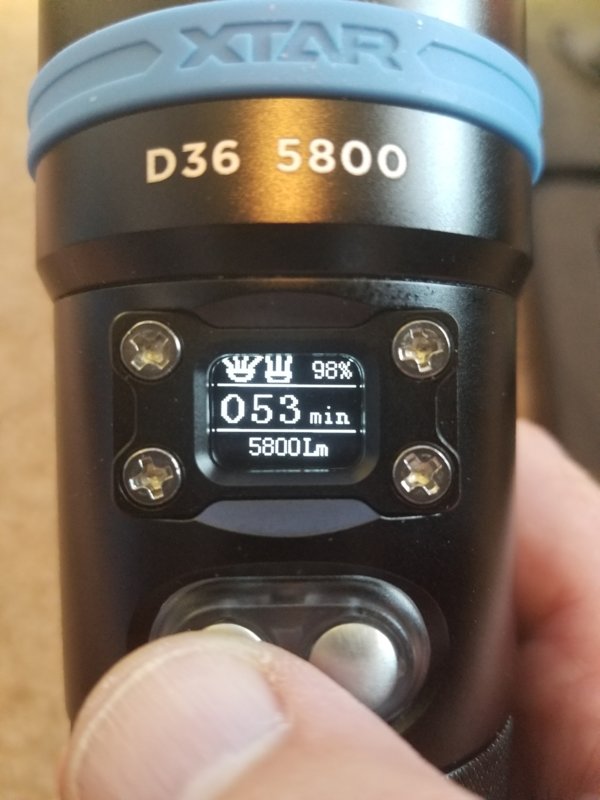 (stand by for usage impressions)
OP

First, let's get the obvious out of the way. 5800 lumens? 4200? 1600? Those are all raw output specs of the Cree LED emitters themselves. I'm sure it's not actually delivering those full amounts of lumens on "target". But, that is true for ALMOST every dive light and its specs. So, no need to have a big discussion about it. The spec is what it is. At least it's not LED emitters with specs of 5800 (total) lumens (max raw output) claiming to have output of 10,000 lumens...

I was diving today with my usual buddy who was carrying his Dive Rite LX20. The LX20 spec is a 6-degree beam angle and 1100 lumens. After the dive, I did not feed my buddy any lines. I asked him, "you were following me, so you could see your own light better than I could, and you could see my light. How did you think they compared?" He said that he thought my spot beam was a little tighter and that it was a bit brighter. He is not one to ever want to admit that anyone else has anything better than what he has, so I took that comment to be very positive in favor of the Xtar light. His light was mostly in my peripheral vision and I didn't invest much in comparing them. All I am willing to say is that I thought the spot size was very comparable and the brightness was very comparable. In my opinion the Xtar spot light is VERY usable for normal diving operations that need a spot beam - i.e. signaling and illuminating things in turbid water.

My impression of the Flood beam is that it is very wide and brighter than any other light I have. Not that that is saying too much. My only other flood beam lights are only 1000 lumens. So, I don't have a good feel yet for really HOW bright it is, but it definitely seems very bright.

Today's diving was in Lake Phoenix. Even at the bottom (60') we had good ambient light. So, on the one hand, I don't have a good feel for this Xtar light yet, because it was already pretty well-lit during my dive. On the other hand, the fact that I could clearly see the beam in those conditions tells me that it's pretty bright. I suspect that if I had tried my DGX 600 light today, I would mostly have struggled to even see the beam on whatever I was shining it on.

Beyond all that, the thing that stands out the most is that the light is FAT. And I don't mean PHAT. LOL I have not yet figured out if there is a good way to carry it on the back of my hand in any kind of hard or soft Goodman handle. It is short enough that I think it would be okay to carry that way, if I had a handle that it fit.

What I DO plan to try is attaching it to the top of my camera as a focus/video light. I have a cold shoe mount that is threaded like a tripod mount, so I think the light will screw right onto the top. I don't usually shoot video. But, that has been partly because I didn't have a decent video light. Now I think I do.

I am going to the Bahamas in 2 weeks for a Blackbeard's cruise. I'm going to take this light and try shooting some video during a night dive. And maybe see how it does using the video light as my only light for shooting some stills.

Finally, some people reading will already know that I have been a big fan of Xtar lights for a while. I have recommended the D26 Whale many, many times and I also think very highly of my D26 1600 (since I got the replacement that actually works right).

This light seems to be also of good quality construction. I only took it to 60' today, which should not be any challenge for it, but at least it worked with no problems! I'm definitely looking forward to using it further in the Bahamas and will post more about it when I get back from there.

Thanks for the review, looking forward to the actual diving thoughts.

stuartv:
Finally, some people reading will already know that I have been a big fan of Xtar lights for a while. I have recommended the D26 Whale many, many times and I also think very highly of my D26 1600 (since I got the replacement that actually works right).
.
Click to expand...

it would be a good thing if only they could have more worldwide distribuitors, and not only Aliexpress,it is not easy to buy from them.

With the numbers your provided, and simple hand calculation,I think flood light at max of 4200 lumen is actually kind of in the ball park. Probably 3800-3900 is possible if the driver is efficient and at the moment of the full battery level. The spot light claimed to be 1600lumen, maybe about 1000 in reality.

The larger diode, the high luminosity output definitely possible at the cost of runtime. Specifically with 3 18650 in series, it is very difficult for them to sustain 2.7A kind of drawn for extended period of time. They get quite hot at such high load, and lose efficiency. Still quite impressed with Xtar for this agreesive design.

inka:
it would be a good thing if only they could have more worldwide distribuitors, and not only Aliexpress,it is not easy to buy from them.
Click to expand...

No,Amazon sell just chargers. The only Xtar light available = seller do not ship to Peru

inka:
No,Amazon sell just chargers. The only Xtar light available = seller do not ship to Peru
Click to expand...

do you need my help to buy? ship directly from XTAR is optional
OP

I am home from a week of diving in the Bahamas from a Blackbeard's cruise.

I charged the light before I left home and I never charged it the whole time I was there! It finally died at the very end of my 4th night dive. I was running it on the Flood Low setting the whole time until the last dive. On my last dive, my camera memory card filled up early in the dive. After that, I ran the D36 on High for the rest of the dive.

After my first night dive, I began referring to the D36 as my Portable Sun. Even on Low, it was frickin' bright! And that 120 degree beam of nice, even light made night dives a whole different ball game than diving with a typical spot light. My buddy swam through a couple of places with his (very bright) spot beam light and never noticed that he swam right past a lionfish that was up against the wall. With my very wide and bright light, I saw them well before i got close to them.

For night dives, even the Low setting of the Flood beam was almost too bright. If it had had a lower setting, I probably would have used it. High was so bright that a lot of the time it lit up so much particulate in the water that it made it hard to see.

On top of my camera, it was my main light for the night dives and served as a great focus light for my camera. Along with this light, I did have 2 Inon z240 strobes on my camera, for taking pictures.

These are some photos I took during the night dives: 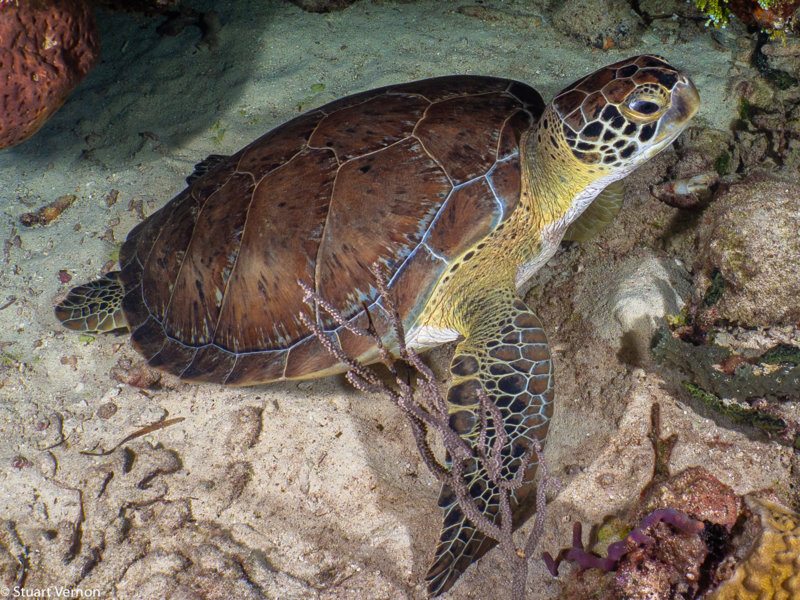 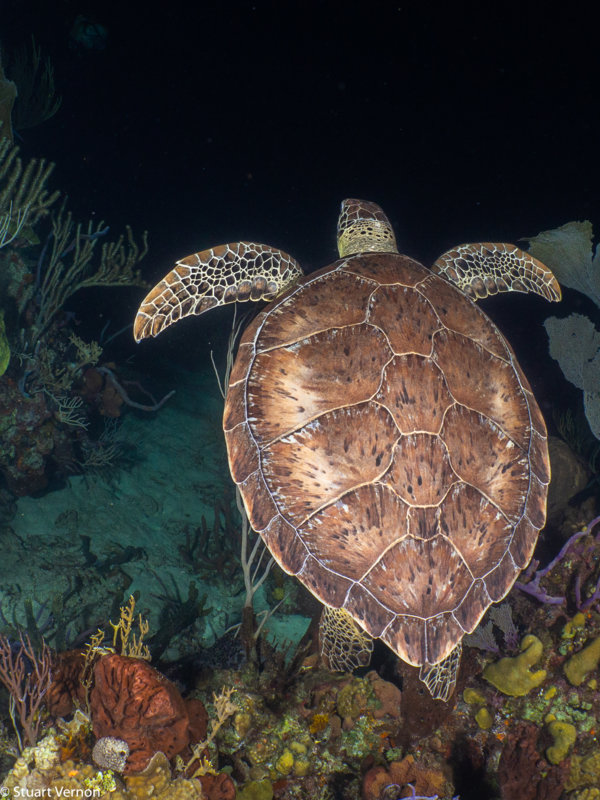 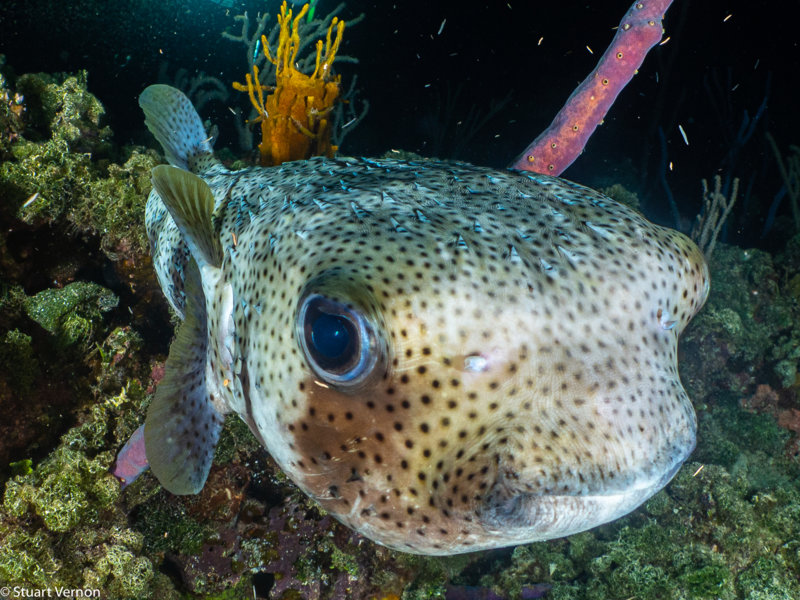 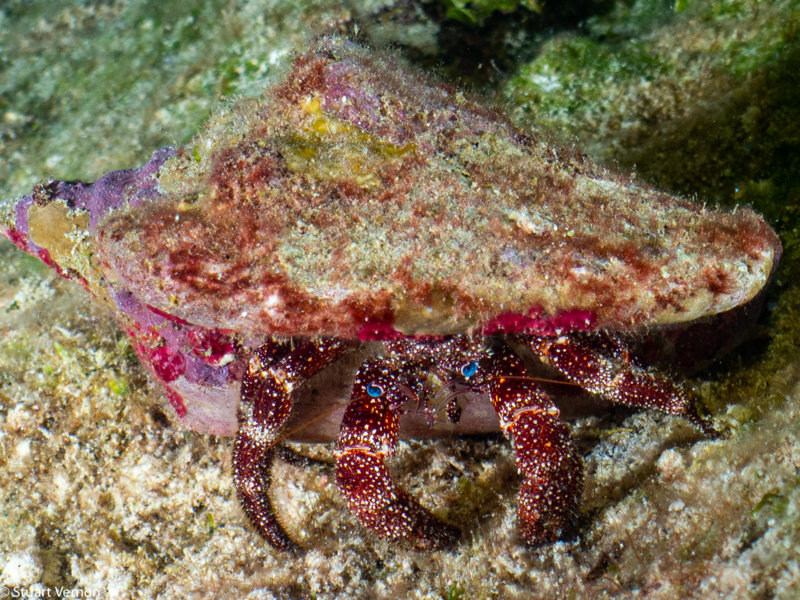 During the last night dive, one of the guys took this picture from the boat.

The big ball of light furthest away is me, at 25' depth, about 100' (horizontally) away from the boat. with the D36 set on Flood (High, probably, at this point in the dive)! The smaller light ball to the left of me is my buddy with his 5000 lumen (I think) spot light. The other lights are groups of divers heading back from the site (the Smuggler's Plane) to the boat. My buddy and I were the last ones on the wreck. 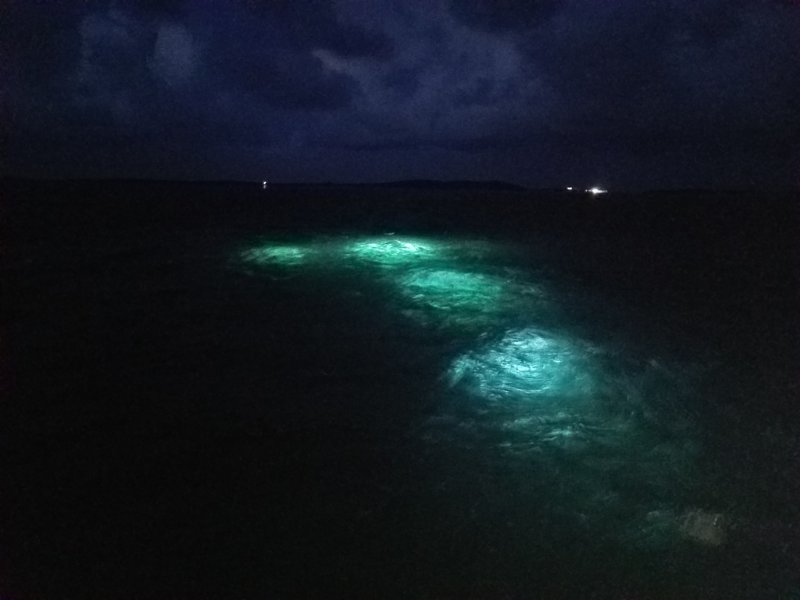