Summary
This is an eight-day (9-16 December, 2018) liveaboard trip around central Maldives with Maldives Aggressor II. The itinerary, as shown in Table 1, includes 6 days of diving, 3 dives / day + 2 night dives, to a total of 19 dives and a snorkeling with whaleshark. Figure 1 shows the Maldives Aggressor II cruising routes (marked by red arrows). We did check dive in Kurumba Housereef, several dives around North Male Atoll, South Male Atoll, Vaavu Atoll, Ari Atoll, and Rasdhoo Atoll. Some of the new diving experiences for me were diving with schooling stingrays in Fish Factory, night diving with schooling nurse sharks in Alimathaa Housereef, night diving with mantas in Maaya Lagoon. 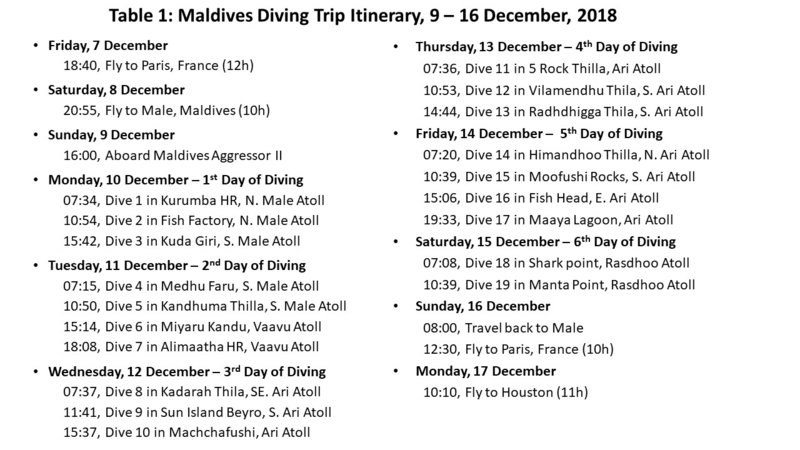 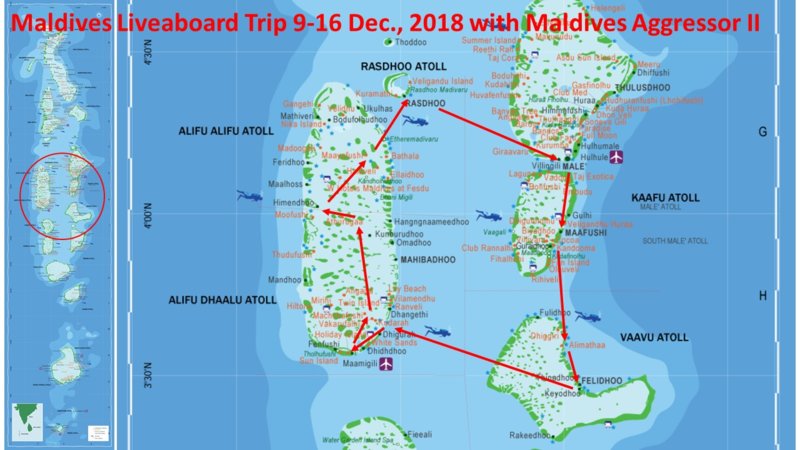 
Background
A quick browse of Maldives location, I learnt that it is about 1300 miles (2100 km) from South India coast. It took me 21-22 hour flight time from Houston to Male. The best flight option was with Delta / Air France with a 7.5 hour layover in Paris on the outbound flights and an overnight stay in Paris on the inbound flights.


The Liveaboard
Maldives Aggressor II, as shown in Figure 2, is 135-foot (41m) long luxury yacht with 11 staterooms for up to 22 divers, along with a dhoni (60-foot long skiff) for bringing divers to dive sites. It runs by 16 crews (2 captains, a dhoni captain, a cruise director, an assistant cruise director, 3 engineers, 2 stewarts, 2 chefs, a deckhand, and 3 divemasters). 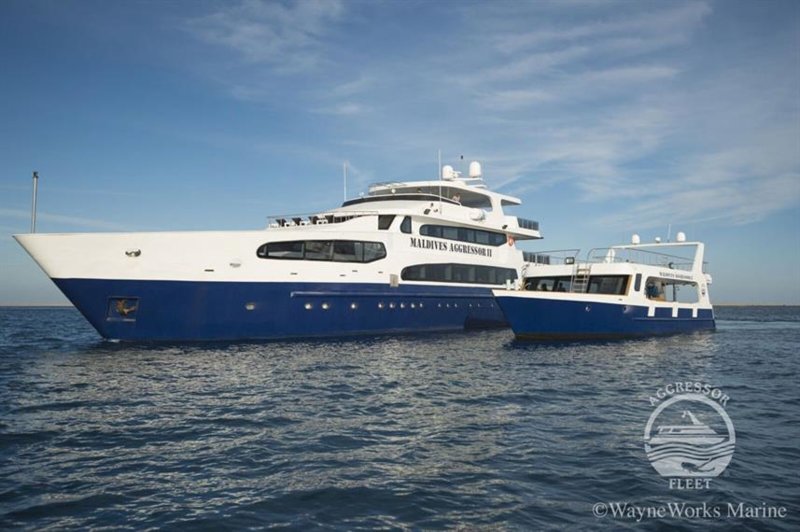 The boat layout is very functional for divers. Galley, dinning, and entertainment areas are on the main deck. Camera station is outside on the back of the main deck. Six of the staterooms are in lower deck, four of the staterooms are on the upper deck and a suite in the maindeck. The roof of the upper deck is a sundeck with open air sitting area for people to relax in between divings.

The upper-deck stateroom, where I stayed, has 2 single beds, private head and shower, plenty of closet space for 2 divers. The housekeeping crew did a great job of keeping our cabin cleaned and orderly.

The meal (breakfast, lunch & dinner) were buffet type in most of the days. Full course of dinners were served during special day (e.g., Welcome dinner). The food were excellent. Special dietary meal were served to those who asked for it.

More detail info about the yacht can be found here: https://www.aggressor.com/maldives.php


The diving
We did 3 dives in most of 6 diving days to a total of 19 dives, with two night dives and two dives on the last diving day. The diving schedule would be posted on the main deck entrance door and divemaster would ring a bell 5 minutes before the scheduled dive briefing. Typical 3-dives / day schedule was as follows:

We saw lots of fish and critters while diving in Maldives. They would be too many to list them all here from every dives. So I would just mention a few unusual / uncommonly seen by me or the first time I saw them during the trip and anything that was noted in my logbook.

1st Day of Diving
We had a great 1st day of diving. Water temperature was about 82°F. Dive 1 was in Kurumba Housereef, North Male Atoll, 83 feet depth with 30 feet visibility. It was a calm dive site, a good place for a check dive. Some fish worth noting were scorpionfish, Regal anglefish and dartfish.

Dive 2 was in Fish Factory, North Male Atoll, 88 feet bottom depth. The most interesting dive was towards the end of the dive at the shallow, just under the dumping ground of a fish factory. We saw some schooling stingrays and several kinds of moray eels, as shown in the video, below.


Afterwards, we cruise down to South Male Atoll during lunch for Dive 3 in Kuda Giri Wreck, 92 feet depth. We saw octopus, a giant clam and lots of glassfish and a masked moray, as shown in Figure 3, below. 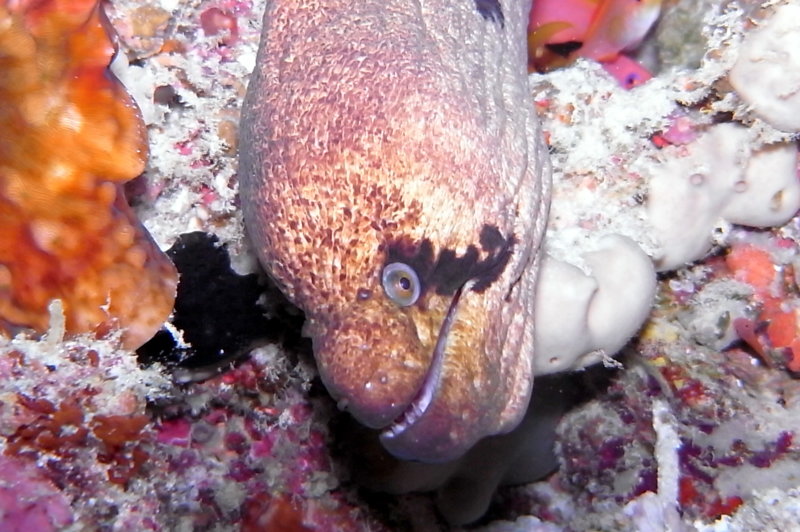 
2nd Day of Diving
We had another good long day of diving, including an interesting night dive in South Male Atoll. Dive 4 was in Medhu Faru, 97 feet depth with 60 feet visibility. It was fast current diving to see whitetip reef shark and napoleon wrasse cruising around easily in the current.

Dive 5 was in Kandhooma Thilla Dive 5, 82 feet depth. We saw a turtle, an octopus, a napping a nurse shark, and oriental sweetlips (the only kind of sweetlips I saw in Maldives).

After Dive 5, we headed south to Vaavu Atoll for Dive 6 in Miyaru Kandu, 95 feet depth, 60 feet visibility. It is another high current dive, but there was not much action, just a few of whitetip reef sharks and a tuna cruising by.

The interesting night dive was in Alimathaa Housereef, 76 feet depth, to see schooling nurse shark, as shown in the video, below.


3rd Day of Diving
On this day we went cruising northwards to Ari Atoll. We dove in Kudarah Thila (Dive 8), South East Ari Atoll, 90 feet depth. We saw eagle ray and my first nudibranch sighting in Maldives, as shown in Figure 4, below. 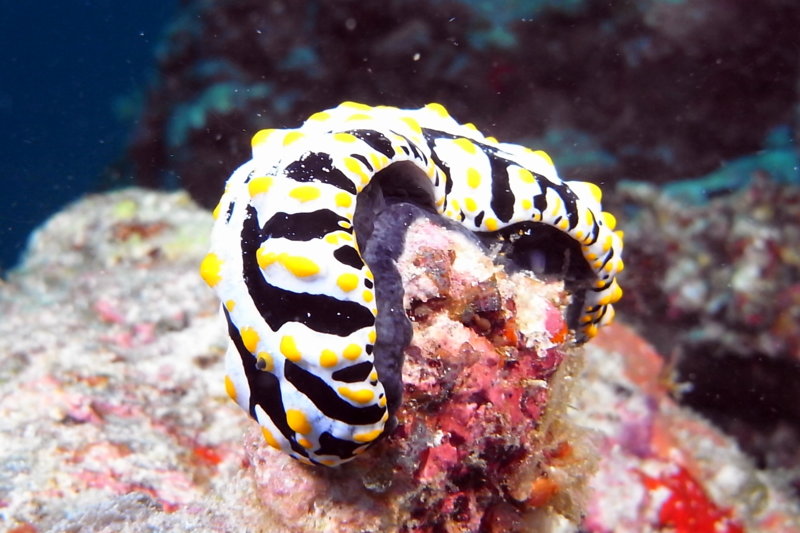 After a hot breakfast we went snorkeling to see whaleshark, I think it was some where in South Ari Atoll. Then we did Dive 9 in Rangali-Hukurudhoo, Bodufinolhu-Maami or Sun Island Beyru for short, 86 feet depth. Although the visibility was poor (20 feet), we saw many kinds of fish like, map puffer, emperor anglefish, dartfish, green moray, sweetlips, guineafowl puffer, and scorpionfish.

The afternoon dive (Dive 10) was in Machchafushi Housereef, a wreck dive at 103 feet depth. We saw stonefish on the wreck, as shown in Figure 5, below. 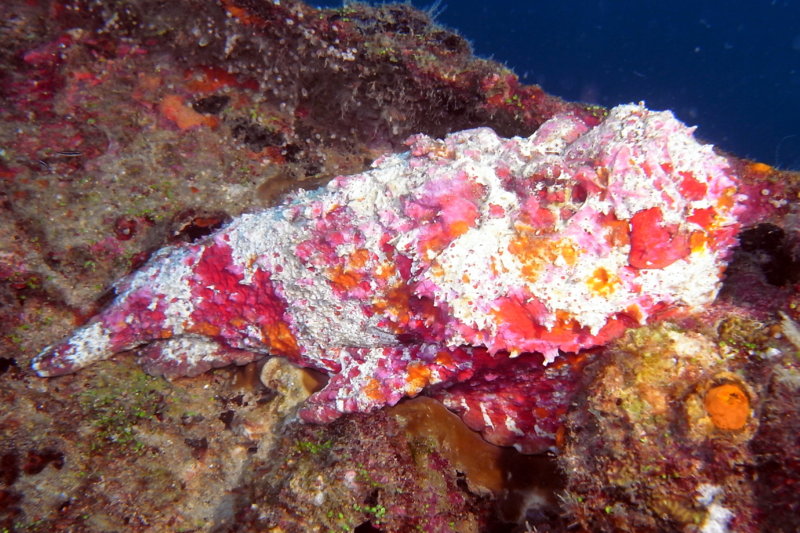 4th Day of Diving
The first dive of the day (Dive 11) was in Five Rock Thilla. I saw a nudibranch that I haven’t seen it before, as shown in Figure 6, below. Perhaps someone could help me identify it. 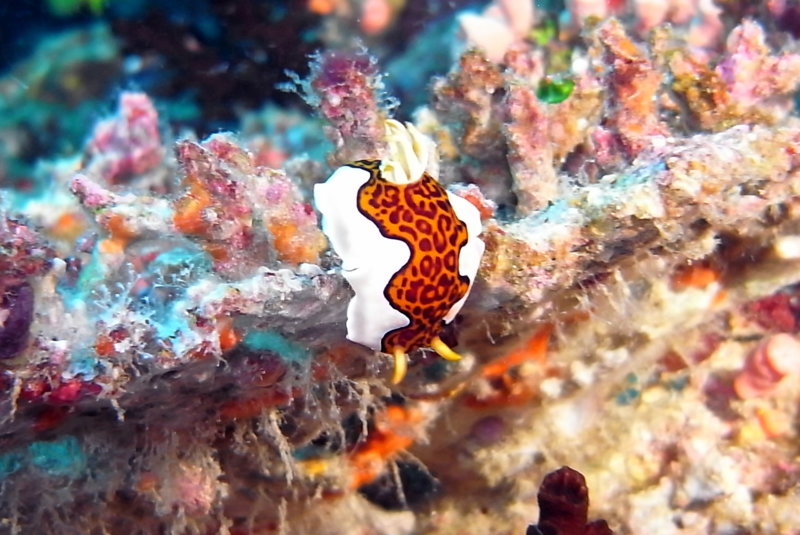 
Dive 12 was at Vilamendhoo Thilla, 102 feet depth. We saw schooling sweetlips and curious peacock mantis shrimp, as shown in Figure 7, below. 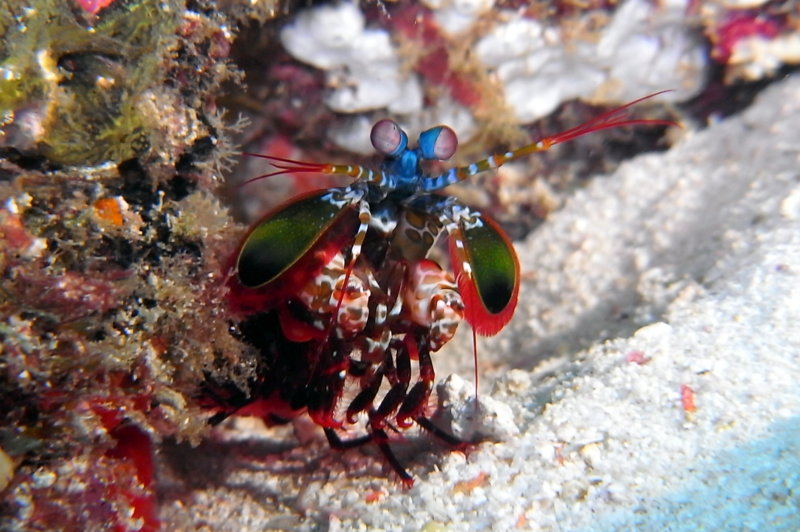 Dive 13 was at Radhdhiggaa Thilla (103 feet depth). Some fish worth noting were marbled ray, clown triggerfish, coral grouper, masked moray eel, and emperor angelfish. We saw an unusual white soft coral, as shown in Figure 8, below. 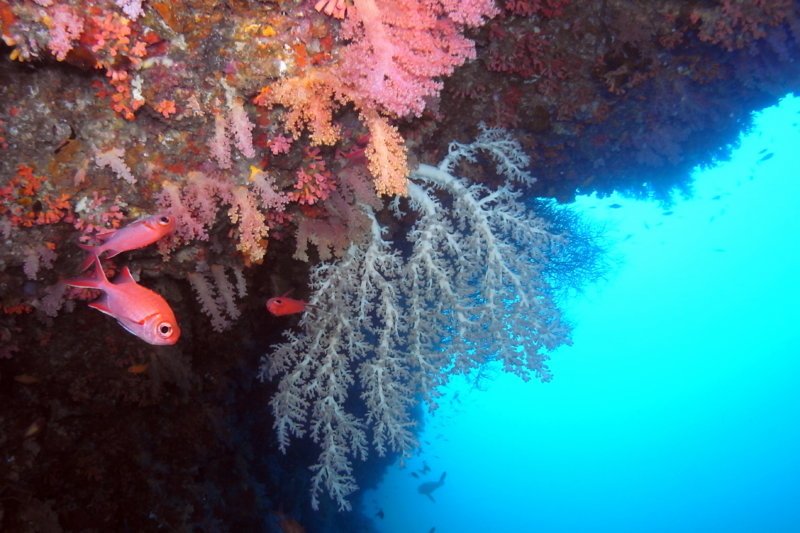 5th Day of Diving
This day was another long day of diving, including another interesting night dive with manta. The first dive of the day (Dive 14) was in Himandhoo Thilla in North Ari Atoll, 94 feet depth, 40-50 feet visibility. We saw lots of fan coral. I spotted a nervous Napoleon wrasse under an overhang that dashed away in a jiffy as soon as I turned on my video light.

On the next dive (Dive 15), Maafushi Rocks, is supposedly a manta cleaning station. So we brought our reefhooks and hooked them on the rocky bottom in moderate current. Unfortunately, the mantas were missing in action. We left the site after a few minutes waiting. We did see whitetip reef shark.

Afterwards we cruised to the East Ari Atoll and did Dive 16 in Mushimasmigili Thila or Fish Head for short. We saw a few turtles munching on top of the Thila (underwater island).

The last dive of the day (Dive 17) was a night dive with manta in Maaya Lagoon. The crew set up lights at the sea sandy bottom to attract plankton for manta to feed on. It took us over an hour of sitting on our dive gear station in the dhoni with full dive gear on, ready for the dive, before we were allowed to enter the water. Tempers flared up from some of overheated divers and shouting match started. Fortunately the pool was open soon after. In the end the long waiting dive was rewarded with cool scene of mantas feeding plankton by looping in front of the divers, swooping right above the diver heads and the underwater light setup, scooping up the thick plankton built up in front of the lights, as shown in the video, below.


6th Day of Diving
This was the last day of diving. We cruised to Rasdhoo Atoll for another chance to see sharks at Shark Point (Dive 18) and mantas at Manta Point (Dive 19). The dives turned out to be a great closure to this great dive trip. At Shark Point we saw silvertip shark, tuna, and leaf scorpionfish, as shown in Figure 9, below. 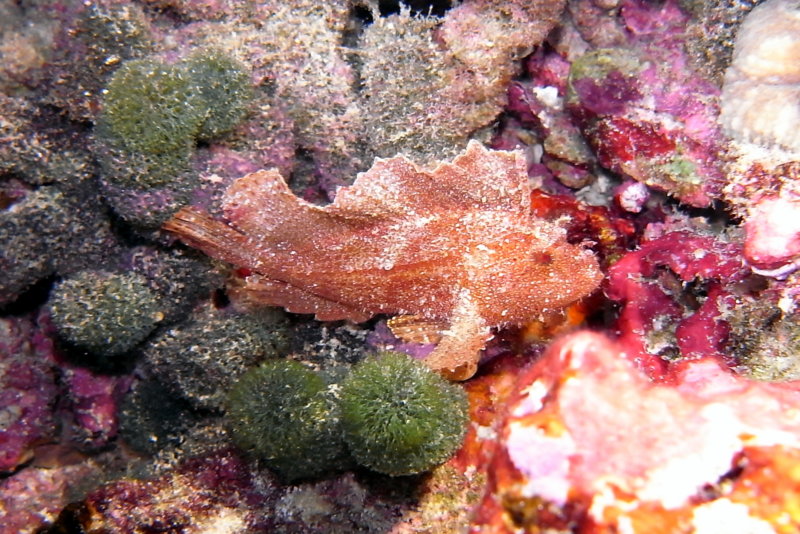 
At Manta Point, the last dive for the trip, we had a good long sighting of mantas at their cleaning station, as shown in the video, below.


Conclusions
My impression of the diving and the trip are very positive. There were tons of fish there in Maldives. The liveaboard was well organized and had well planned itinerary to keep all of the guests wanting not to miss the dives. There were probably about 90% of the guest receiving the “Iron Diver” award for not missing a single dive during the trip. I will be coming back for more diving in Maldives in the future, perhaps going to the Southern Hemisphere or Deep South route.

Thanks for the report! I really want to go, just need to save some money now...

How does it compare with the Indo-Pacific?
OP

Lorenzoid:
How does it compare with the Indo-Pacific?
Click to expand...

Maldives has more pelagic, but the corals and bio-diversity are not as good as Indo-Pacific.
T

Thanks for sharing.
OP

Here is another trip report posted by my dive buddy in UnderCurrent.org

I forgot to mention about the beach BBQ and party, including volleyball & soccer games, on an island on 2nd to last night. 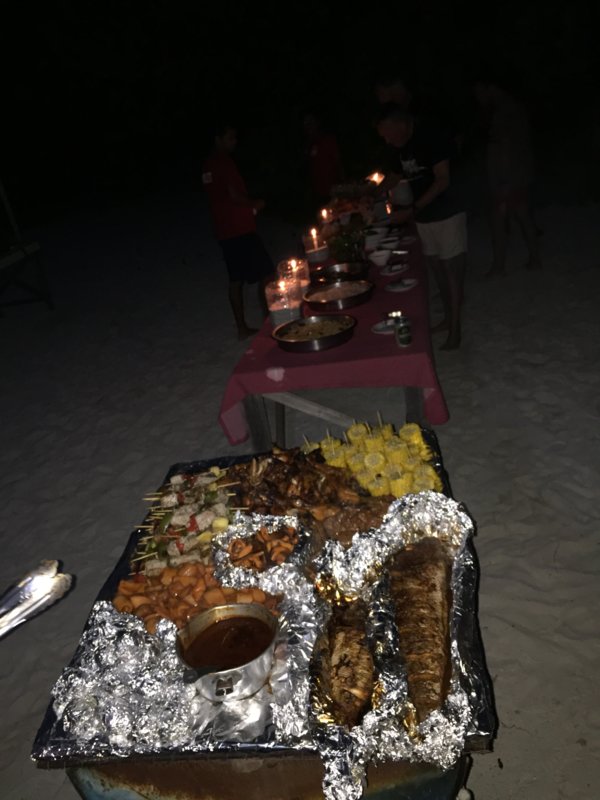 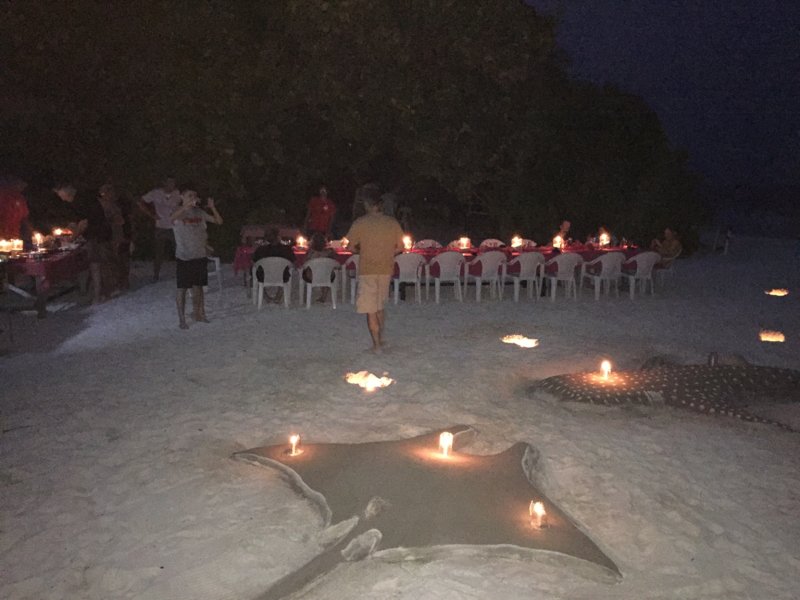 In the last afternoon, we had a walking tour of Male followed by dinner on a rooftop restaurant.
S

Your comparison to Indo-Pacific, in light of your experience, was helpful. Thanks.
You must log in or register to reply here.

Which central atolls for land-based in early March?