Many years ago I was diving within a boat mooring field during a time few boats were present. I came across a strange creamy colored mass on the bottom. Having spent time at Antonio's Pizzeria, I thought it looked like a batch of Mama Mia's Day Old Spaghetti that some yachter had tossed overboard. Once I looked closely, I realized it was a fairly large egg mass. After returning to my home, I tried to solve this mystery (in an age before the Internet and Google. I discovered in one of my books that it was the egg cluster of the California sea hare (Aplysia californica).

I'm glad the PC crowd hasn't discovered this species and tried to rename it. Most humans with an IQ above 70 know that jellyfish and starfish are not actually fish. While the sea hare does bear some resemblance to a rabbit, especially with its funny bunny-like "ears" (actually sensory rhinophores), I'm hoping folks don't think they are direct relatives of Peter Cottontail!

This species is presently fairly common in the dive park (if you look closely and have good vision!). Its geographic range is from Yaquina Bay Oregon, to El Salvador and it is also known from Japan. Its depth range is pretty much limited to 100 ft due to the seaweeds it feeds on. They are limited to depths where sufficient light penetrates for photosynthesis.

The sea hare is actually a large, shell-less snail related to the colorful nudibranchs. According to Wikipedia this species can elongate its body to nearly 30 inches. I've never seen one anywhere near that length (but if you read it on the Internet it must be true?). Jensen, et al. Beneath Pacific Tides does state it can reach 27 1/2 inches. Most I've observed were around one foot. Their skin pigmentation is often reddish brown but may also be tan or green.

Pigmentation is a product of its food source. Sea hares feed on algae and eelgrass. If it is dining primarily on red algae, that yields the reddish-brown color. My skin only turns red when I'm embarrassed or sun burned. If it is feeding on other algae or on the marine grasses, it will assume the other coloration.

Another consequence of its dining habits is defensive in nature. Aplysia produces an "ink" similar to an octopus to ward off potential predators. The primary one is reddish-purple in color and is derived from the red algae it feeds on. The fact that the skin coloration is similar to the algae also offers a bit of camouflage. They also secrete a milky white substance from the opaline gland for defense. It must be fairly successful with these since there are few predators willing to take a bite. They include some starfish (er, sea stars) and lobster.

Now there is a behavioral aspect of this species, and its close relative the black sea hare (Aplysia vaccaria), that also compares to cute little Easter bunnies (or the wild ones I'd capture on our school grounds as a kid in the Midwest). They are virtual sex addicts. Hmmm? I don't think that necessarily makes them Playboy bunnies. When it comes to reproduction (aka mating), they often form orgies of several individuals (up to about 20). On second thought, maybe it does. These snails are hermaphroditic. They have both sex organs in each individual and can act as both genders during mating. Double your pleasure, double your fun (as the Doublemint commercials say). I'll leave out the gory details of their copulation... and just say that it can go on for days. Apparently they prefer to "do it" in the morning and rarely take "nooners."

Mating is generally in the summer months once the water temperature exceeds about 63° F. After copulation the sea hare lays its strands of eggs, usually attached to a hard surface on the sea floor. I have seen them attached to the broad blades of deep water kelp. Initially the eggs are cream or yellowish in color but as they age they turn brownish. Upon hatching, the larvae live in the plankton for about 5 weeks then metamorphose into the juvenile stage for another 35 days. A mere 85 days after hatching, the individual is reproductively mature! Normal lifespan is around a year, so they have to move fast! 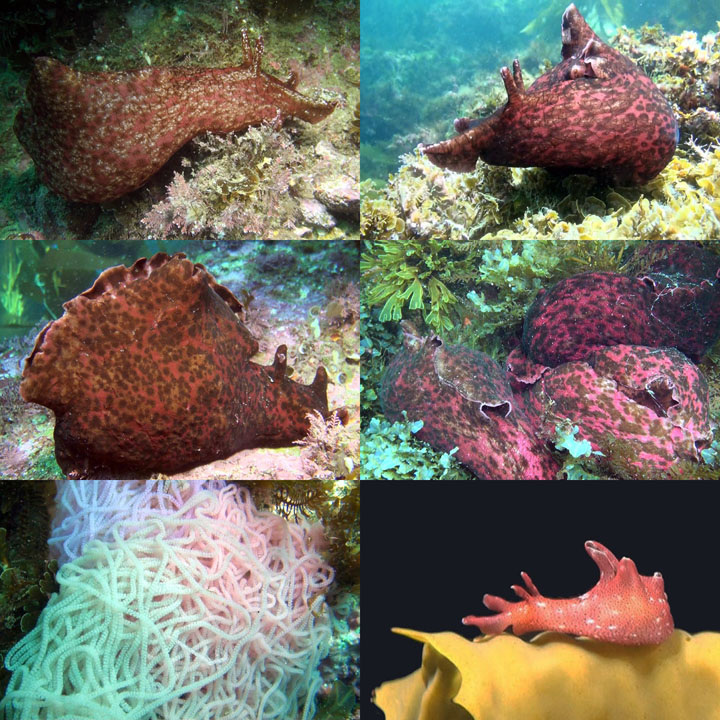