Back when I was doing my graduate work at UCSB, my focus initially was on the marine algae in our waters. Many of them are difficult to identify because they can assume different shapes under different environmental conditions. Others require study through a microscope to detect minute aspects of cell structure. While I have several scopes in Dr. Bill's Lab, I don't carry them with me when I dive... and my unaided vision isn't sharp enough to detect these. Therefore, I chose the biggest species I could find here... giant kelp (Macrocystis pyrifera).

All my research in those years (and much of it back in the late 60s and 70s) was focused on this species. I observed it while diving, as drifting kelp "rafts" and through satellite images of it taken from space. Once I completed my massive doorstop (my 771 page doctoral dissertation) and returned to Catalina full-time, my interest expanded. I wanted to learn as much as I could about the entire kelp forest ecosystem... from the tiniest plankton to the giant kelp.

Back then my eyes were much better than they are today. The camcorder I used to film all the critters was capable of extreme close-ups (unlike my current rig). One of the mysteries I encountered early on was a small (less than an inch) anemone-like critter that covered much of what some refer to as Octopus Rock in our dive park. At the time I wasn't sure of the species identification but knew it was a zoanthid. Later I confirmed that it was the elongate zoanthid (Epizoanthus leptoderma) by using Jensen, et al. Beneath Pacific Tides. It is in the same genus as the beautiful orange zoanthids (Epizoanthus giveni) named after my friend Dr. Bob Given.

According to Jensen, the distribution of this zoanthid is not fully known and the book lists it as "southern California." Many divers may miss this critter as they speed past the reef in search of wreckfish (giant "sea bass," Stereolepis gigas) or tope sharks (Galeorhinus galeus). Those of us who are slow pokes (due to age or personality) take in the minutiae of life on the reef.

These zoanthids are stalked, that is their columns are longer than most at a whopping one inch maximum. The tentacles number 44-52 if your eyes are good enough to distinguish them. They are also banded and are found only along the margins of the disk. The body color is brownish to gray. Often they are present in large numbers as you can see in the accompanying images.

So what exactly is a zoanthid? Many call them zoanthid anemones or zoanthid corals due to the similarity in appearance, but technically they are not. Most anemones are solitary whereas the zoanthids grow in colonies. They reproduce asexually (so boring) and the "offspring" are connected to the parent via a stolon. They also lack the stony "skeleton" of the hard corals. Species of zoanthids that live in tropical and subtropical coral reefs often incorporate zooxanthellae (photosynthetic dinoflagellates) in their tissues just like hard corals do. This can give them beautiful coloration. 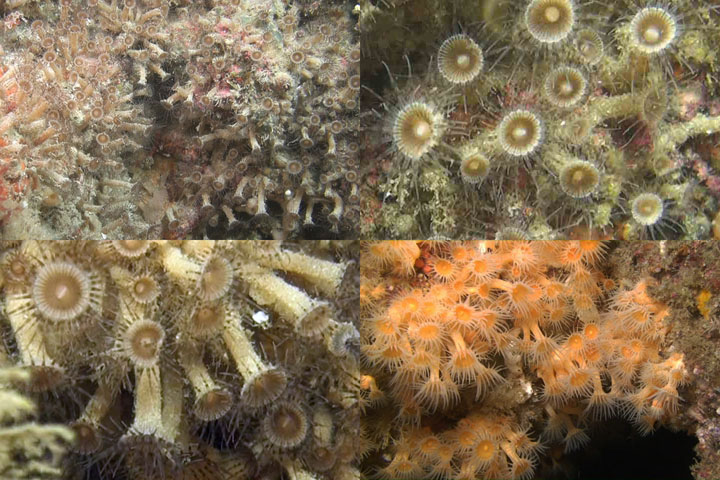 One of my favorite hard-to-find critters. I've only seen them at one site on the mainland, Flat Rock off Palos Verdes. 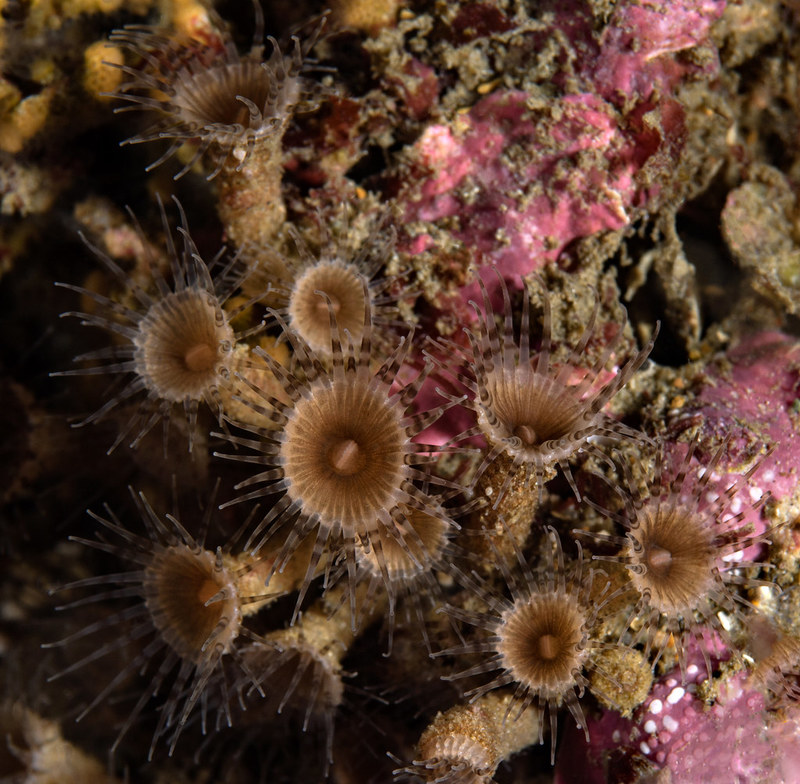 Another relative we don't find often is Epizoanthus scotinus. I found these on the White Point outfall pipes off San Pedro. 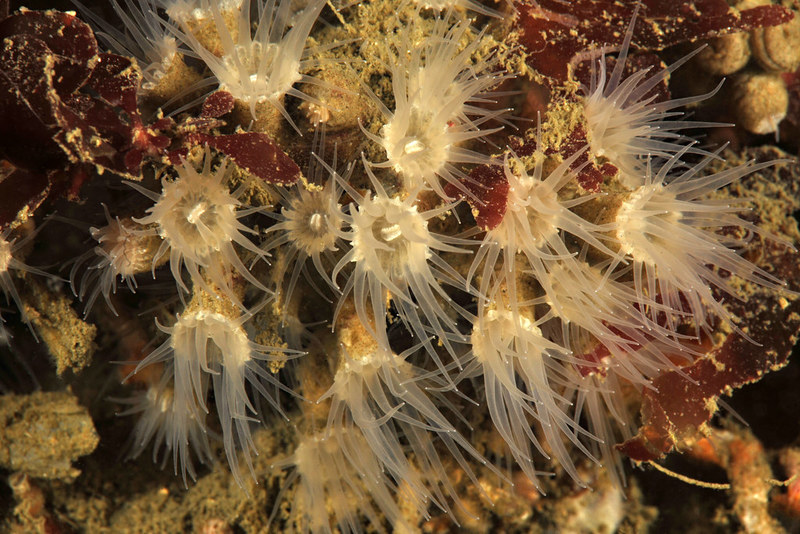 Another wonder at Farnsworth Bank