Way back in my grad school daze, I was studying to gain the credentials necessary to be a "real" marine biologist. I had already done research funded by the National Science Foundation that was published in peer-reviewed journals for a number of years. Back in 1969, before the time of e-mail, I often typed correspondence with many research scientists around the country using my unique style. My students referred to it as "the sound of one hand typing." The replies from these biologists were often addressed to Dr. Bill Bushing.

Since my major advisor was none other than kelp expert Dr. Mike Neushul, my initial studies were focused on marine seaweeds. In the introductory phycology class (which I later was teaching assistant for) we were required to collect a number of different marine algae and identify them. Of course I did my collecting during the holidays when I could be back on Catalina Island.

I was pretty proud of the collection I accumulated. I thought I did a pretty good job of identifying them to species as well. Boy was I mistaken! When it came time to turn the collection in, it was reviewed by Dr. Neushul, Dr. Dan Reed (another kelp expert) and others. I was shocked to find that many of the species I thought I had identified were debated by the evaluators. A few were dead wrong. However quite a number of them were in dispute by the team. Some thought they were one species, others thought another.

Eventually we came to the conclusion that a number of the species I collected on Catalina were different from the individuals of the same species from Santa Barbara waters. I re-learned that the same species growing in different environments could look quite different from a morphological perspective. If found in still water as in a protected bay, the same species might appear quite dissimilar to those growing along a wave-swept exposed coast. We refer to these as ecotypes. I also realized that I was probably not going to spend my days in a lab looking at algal samples through a microscope to identify them.

So my focus shifted from strict phycology (the study of algae) to kelp forest ecology. I still focused a lot of attention on algae, specifically our giant kelp (Macrocystis pyrifera). However I also got to spend days out in the water SCUBA diving to put as many of the pieces together as I could to get the "big picture." I could learn the fish and invertebrates and how they interacted. I largely avoided the marine algae other than the obvious dominant ones.

Well, after 50+ years of studying kelp forests and ignoring most of its seaweeds, I find that at my advanced age (a good thing considering the option!), it is time to focus on the alga in our waters. I already had three field guides dedicated to seaweeds, but decided I needed to get a fourth. I logged on to my Amazon account and ordered a copy of Mondragon and Mondragon's Seaweeds of the Pacific Coast: Common Marine Algae from Alaska to Baja California.

Of course phycology and other biological endeavors have changed a lot since I was in college and grad school. Back at Harvard there were "office wars" between the ecology types (like myself) and the molecular biologists. I soon realized that molecular biology would become a major tool in identifying different species. Today we can examine the genetic makeup of algae and marine critters. Instead of making judgment calls based on the shape of the pneumatocysts (float bulbs) on different individuals, we can now make judgment calls based on the underlying genetics which give us a much better idea of whether two individuals are of the same or different species.

Image caption: The new field guide and algae of the kelp forest to keep me busy. 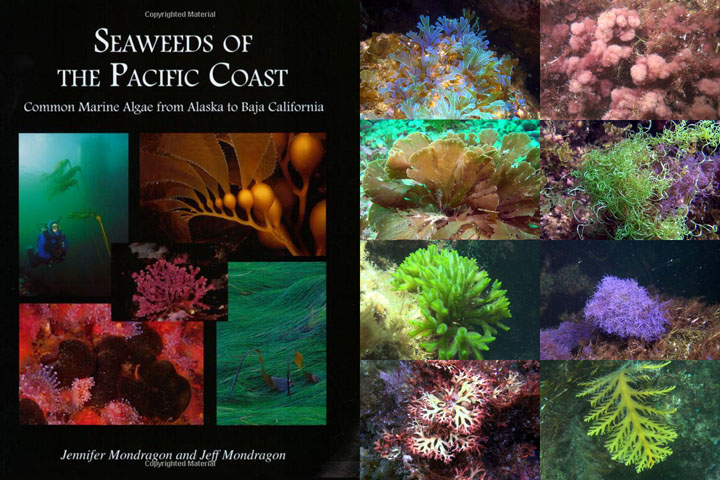