Back in the days when I served as marine biologist and underwater videographer on Lindblad Expeditions eco-cruise ships in the Sea of Cortez, Belize and Honduras many of our passengers were birders and carried binoculars and long telephoto lenses. I would often tell them to cast these aside unless they were pointed at the many whales we saw, and grab a microscope to see something truly unusual... plankton.

Well, I'm not much of an ornithologist since relatively few bird species know how to swim underwater. I do enjoy seeing cormorants and pelicans, and even tolerate seagulls. However, I'll break my mold by focusing today on a semi-aquatic bird, the osprey or fish hawk (Pandion haliaetus). I occasionally see them along our coast and there is even one that perches on top of the flagpole at the dive park.

They are very cosmopolitan and are found on every continent but Antarctica, although in South America they are present as non-breeding migrants. I always assumed osprey on the East Coast were the same species as ours, but it appears the one there may have been assigned to a separate species instead of a subspecies at least by some biologists. The osprey was originally described scientifically by Carl Linnaeus who in the 1700s devised the scientific naming system we still use today. Osprey frequent aquatic environments, primarily those bordered by forest rather than shrub or grassland, and are rarely observed in inland areas except during migration.

The osprey is fairly large hawk that forages primarily over water. Their streamlined bodies are brown above and white on the undersides. The head is white with a brown "mask" across the eye and a black bill. Their wings are slender and when seen in flight the bird approximates an "M" shape due to a bend in them. The body may be two feet in length with a wingspan of nearly six feet. These birds may weigh up to about 4 1/2 pounds.

When foraging they often hover above the water's surface before diving feet first to capture their prey in their talons. Birds like pelicans and terns, which capture prey in their beaks, prefer a head first plunge. The osprey then flies off with the fish visible in its talons. Like owls, the outer toe of the talon is reversible allowing the bird to hold prey more securely.Fish make up almost all of their diet but occasionally they may take small mammals, reptiles or amphibians and even other birds.

Ospreys reach sexual maturity at three to four years and usually begin mating. Together they build large, very conspicuous nests of sticks which are often on top of poles (but never lithuanians) or dead trees. The nests may be used for several years with the adults adding more nesting material each time. I had an opportunity to film osprey chicks in such a nest waiting for their parent to bring lunch. Apparently young ospreys may be forced to delay the fun if there is an insufficient number of suitable nesting sites.

Unlike many humans, this species mates for life. They court by circling high in the air with the male diving down to the nest site. He often carries a stick or a fish. I'm guessing he gets better results with the fish, but who knows what the ladies want? Females lay two to four cream colored eggs blotched with brown in the nest. They hatch in five to six weeks and weigh a mere two ounces. My granddaughter Brie was a nine pounder, but she is a human.

According to Audubon (and they should know our fine feathered friends!), the male brings fish to the female who then feeds it to their young. They fledge in eight to ten weeks. Occasionally young are stolen from the nest by eagles or owls. This is called kleptoparasitism with the root "klepto" meaning stealing. Although the usual lifespan is 7-10 years, some individuals may survive 20-30 years! The highest mortality occurs during their annual migrations.

The osprey is not considered endangered at this time. In the past humans would collect the eggs and even shoot the adults (as well as bald eagles!). However the most severe anthropogenic threat in recent years was due to the effect of insecticides, especially DDT. The fish they took carried significant burdens of this chemical. It affected the osprey (as well as the bald eagle) reproduction by interfering with calcium metabolism. This caused the birds to lay eggs with thin shells that were very fragile. Fortunately the ban on DDT in 1972 allowed its level in the ocean to decline and the osprey and bald eagle are recovering.

Image caption: Fantastic images of an osprey taken in Orange County by my friend Dr. Alan Grant and my image of chicks in a nest. 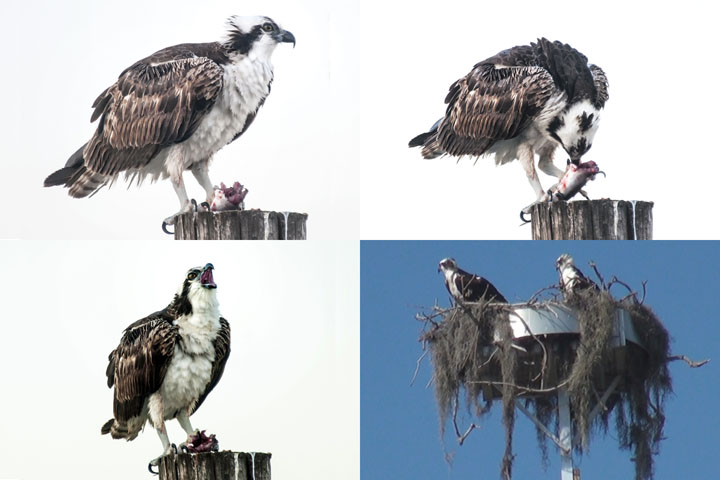