Recently a Facebook friend from San Diego, Rocio Bunker, posted an interesting video showing parasites on a fish known as the C-O sole (Pleuronichthys coenosus). I was intrigued by this since I had never seen these parasites on fish in our island waters. I wondered if maybe it was time for prescription lenses in my dive mask, or a radical eye transplant. However, my last eye test scored 20/20 vision so I decided it presented a different dilemma.

Now I have seen and filmed parasites on a number of our local fish including wreckfish (giant "sea bass"), kelp bass (a true sea bass) and California sheephead to name a few. All the parasites I've seen were copepods, a subclass of the phylum Arthropoda. Wreckfish often bear heavy loads of these parasites, especially when they arrive at the beginning of the mating season. Some biologists feel these parasites are largely picked off by cleaner species such as sheephead, señorita, rock wrasse and kelp bass while they seek out mates here.

Rocio believes the parasites she filmed on the C-O sole were actually leeches. I was shocked by this since the only leeches I was aware of were from fresh water... or a few terrestrial ones who borrowed money from me. I did a little research and discovered that, indeed, there are species of leeches that live in the ocean water and parasitize marine critters. Like the freshwater ones, they pierce the skin of their host to feed on blood or body fluids.

I told Rocio I had never seen parasites on the C-O sole in our waters. She suggested that maybe the abundance of parasite "pickers" (cleaners) here may keep them in check. Certainly a possibility, but I've never seen any of our local cleaner fish inspecting bottom fish like C-O sole or halibut. I wondered if there might be another reason for the absence of these leeches in our local fish population.

Now much of my scientific research, dating as far back as the late 1960s, has focused on marine biogeography. This discipline looks at the geographic distribution of various species and how they might have populated their range. Because I live on a somewhat isolated island, this was a natural focus of inquiry that actually had its beginnings when I took E. O. Wilson's evolution class at Harvard way back in the daze.

My earliest focus was on how drifting kelp rafts can disperse many different species to offshore islands. Even before I came to Catalina; I worked with one of my Harvard mentors, H. Barraclough Fell, who had studied drift kelp dispersal in his native New Zealand waters. We worked on several global issues relating to the dispersal of marine echinoderms (sea urchins, sea stars and their relatives).

That study was also my first experience using a computer... the massive mainframe at Harvard. One night I had spent hours punching a deck of IBM cards for a computer run the next morning. As I walked back to my dorm during the Cambridge winter, I slipped on the slush on Massachusetts Avenue and scattered the deck of computer punch cards. Knowing that getting a time slot on the computer was difficult, I walked back to the computer center and did an all-nighter re-punching that deck. At the time I questioned how useful computers would be in my research!

With that background in mind, I suggested an alternative hypothesis for why our C-O sole did not appear to have the leech parasites while the mainland population did. C-O sole are flatfish and are bottom dwellers. As such, they are not at all equipped to cross the very deep San Pedro Channel between Catalina Island and the mainland. They undoubtedly dispersed to our waters as tiny larval forms in the plankton.

The parasitic leeches would have no way to disperse on these tiny larvae as they would be much larger in size. The copepods on our kelp bass have me stumped since those fish are highly reef-associated and don't swim long distances. The parasites on our wreckfish can easily disperse anywhere their host decides to swim so their presence in our waters is no mystery. I will continue to keep an eye on our soles to see if any host the leeches, but I think I'll stick to that hypothesis until proven otherwise. That's how science works! 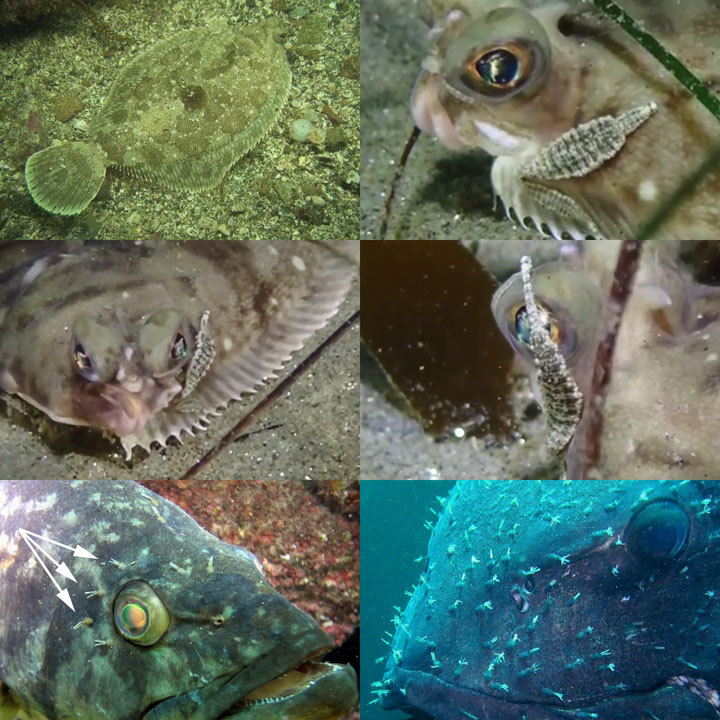 Are these "leeches" in San Diego waters are new phenomenon or just something that you had never seen before? If the former, why do you think they are only being seen now? Perhaps related to climate/environmental changes or loss of predator in these waters?

On a different note, I am a little younger than you and my first experiences with programming began with BASIC on a TRS-80 in the 1980s when the worst thing that could happen was for my dog to eat a bunch of floppy disks (that literally happened one night). The number of times I have heard "I slipped... and scattered the deck of computer punch cards," I'm amazing at how your generation ever managed to not just give up in frustration and bring us to where we are today with computers and programming. Thanks for your persistence!
"Porque nunca sabes lo que tienes hasta que lo pierdes." - Juanes
OP

Can't really say re: the leeches in San Diego waters as I rarely dive there.

I almost gave up on computers after my IBM punch card days but quickly adopted them in the early 80s when I got my first two CP/M based computers... a Kaypro 4 desktop and an Epson Geneva laptop.
Dr. Bill: I once had a 6-pack but now I have a full keg... well, maybe just a pony!
Dr. Bill: Not THAT kind of doctor... but I'll take a look at it anyway!
Kelp forest marine life images, DVD's for sale, and archived "Dive Dry with Dr. Bill" newspaper columns
Single or Buddyless? Check out SingleDivers.com or PM me!
You must log in or register to reply here.