Years ago before many of my readers were born, I was attending Harvard College to earn my degree in applied math and biology. One of the professors there was Dr. Giles Mead who taught ichthyology. He was married to a research fellow at the Radcliffe Institute named Dr. Sylvia Earle who had already established her scientific credentials with a comprehensive study of the seaweeds in the Gulf of Mexico.

In 1969 after graduation I moved to the Catalina Island School (Toyon Bay) to teach marine biology. Dr. Mead and Dr. Earle followed me to southern California when he became director of the L. A. County Museum of Natural History. Well, actually, no one follows me except my Facebook friends and Oscar the sheephead when he mistakenly thinks I'm going to feed him a nice, juicy sea urchin. Sylvia Earle actually did "follow me" to Toyon Bay where we both were involved in early Jean-Michel Cousteau Project Ocean Search programs. Later she became a board member at the Toyon school.

But our paths diverged back then and I became a lowly dive bum while Sylvia blazed a trail few marine biologists could surpass. In 1970 she led the first all-female dive team living at 50 ft. on the ocean floor in Mission 6 of the Tektite II expedition off St. Johns in the U.S. Virgin Islands. Sylvia began SCUBA diving a decade before me and recognized the value of it for scientific work. Then in 1979 off Oahu she set the women's record for untethered deep diving, spending 2 1/2 hours walking on the ocean floor at about 1,250 feet. She did it in a one atmosphere JIM suit like the ones I filmed the U.S. Navy using off Catalina a few years ago.

Even that wasn't enough for "Her Deepness." She correctly felt submersibles would also be an effective tool for marine biologists so in 1992 she founded DOER (Deep Ocean Exploration and Research) Marine which designs and builds submersibles for a wide range of scientific and commercial uses. Her daughter Liz Taylor and Liz's husband Ian run the company today and were instrumental in the Doug Aitken underwater pavilions (sculptures) in our dive park last year.

Sylvia served as the chief scientist at NOAA in the early 1990s. She became an expert on the impact of oil spills, having investigated the spills associated with Iraq's brief intrusion into Kuwait. She also studied the effects of the Exxon Valdez spill in Alaska and the Deepwater Horizon blowout in the Gulf of Mexico. In 1998 she became the first female Explorer in Residence at National Geographic.

Over the years Sylvia has become an incredible voice for the planet, especially the 70% of it that is home to us marine biologists and SCUBA divers. I have heard her talk several times and when my dive friend Geoff Walsh said she would be speaking in Malibu at Pepperdine University, I quickly RSVPed for a seat. I met Geoff at his home and drove to Pepperdine where dive buddy Catherine Ngo joined us. There were quite a number of my dive friends in the audience as well, and all raved about her talk.

Sylvia was speaking about her long-term interest in establishing more marine protected areas (MPAs) around the globe. This has been an interest of mine since the early 1990s when I did my Ph.D. research to identify regions of persistent giant kelp that could serve as future MPAs around our island. In 2009 Sylvia formed Mission Blue to work towards greater exploration of and education about our oceans, and the creation of a global network of MPAs. At present about 5% of the ocean has protected status and Mission Blue hopes to increase that to 30% in the coming decades.

Sylvia outlined many of the greatest threats to our marine environment. A major one is the continued burning of fossil fuels and its impact on global climate, pollution and changes in the chemistry of the oceans. Speaking of pollution, one of her slides showed an unopened can of SPAM at the deepest spot in the ocean, the Marianas Trench. The increasing presence of plastics in our oceans and their impact on marine food chains leading up to humans was another. Overfishing is yet another threat not only for future human consumption, but for the health of the ocean's ecosystems.

Despite her concerns about these impacts, Sylvia's message was one of hope. She firmly believes human beings have the ability to learn about them and, unlike other species, effect change. The ocean is an important source of not only food for our species, but of the very life giving oxygen and water which are necessities for most living things including you and me. She refers to areas of the ocean which have special ecological significance as "Hope Spots," areas she would like to see protected. Sylvia's message is a positive one... through greater access to information, Homo sapiens can become familiar with the threats and act to reverse them through our own lifestyles and through "political" action.

Image caption: Sylvia (center) with other members of the Tektite II expedition and a one atmosphere JIM suit used by the U.S. Navy off Catalina for training; my dive buddy Catherine Ngo having Sylvia sign her book and my friend and host Geoff Walsh and Sylvia at the talk along with some photobombing dive bum. 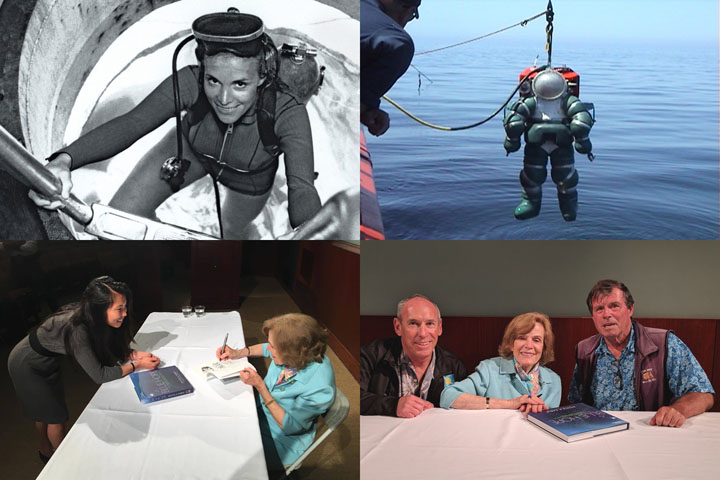 Thanks for posting this story along with all the other amazing stories you have to tell. Dr. Sylvia Earle has been someone I have admired for years and I read all I can from her and about her. Oh and man do I want to try out a JIM suit!!
"Every day above ground is a good one but any day underwater is a great one!" - me​
RAID #29215 (Inactive) PADI #422176 (Inactive)
Instagram
ScubaWithTurk - Sidemount Training and Blog
DRDS - Desert Reef Dive Systems
You must log in or register to reply here.