Which O-ring material? A Conundrum

So my friend brings his regs back after a year for a PreDive check before a trip to Polynesia.
Things are fine except for one crusty second stage, which I serviced with a new kit. Everything checks out, including a submerged check, and off he goes. 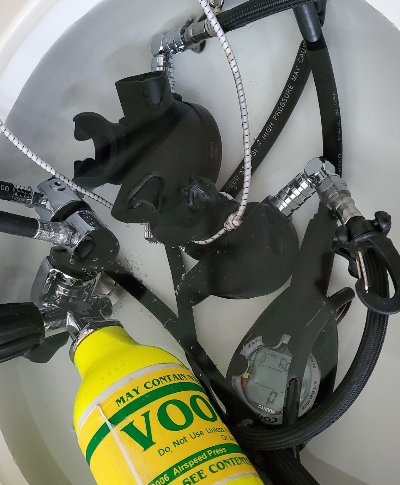 He comes back from the South Pacific saying his hose leaked and so he used his wife's set.
Man, did his hose leak!! The connection from his hose to his right angle connector (which I did not disassemble and service - it had just been a year) was fizzing like crazy. 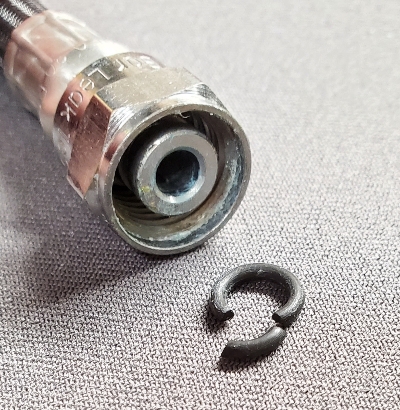 So there's the problem, obviously. And I've gotten him to promise to do a little "owner's course" with me this winter so he could do that 3-minute fix him himself from his Save-a-Dive kit.

But that's not the issue.
It's how did this happen!!?? And how do I prevent it?
He was only in for a quick check. I'd built the set from miscellaneous regs for him a couple of years ago, and had serviced everything last year.
So the then-new hose was at most 2 years old and had never seen any dynamic motion, since it was attached to the right angle connector. I didn't see a need to check that, which was obviously a mistake.

The o-ring looked like a dried-out cracked old o- ring from a twenty-year-old 109. Except that it was a new'ish hose. I put the fragments under the microscope, but couldn't really tell if it was Viton, EPDM or nitrile. The mold pattern under the microscope was uneven, so I don't think it was one of my shop o-rings after a comparison. I assumed therefore, that it was an original nitrile o-ring from the reputable (but Pacific) manufacturer. But it was only two years old!

When I looked at the pieces more carefully, it didn't look dried out or cracked. I was trying to decide if instead, there were maybe two little pinch marks next to each end of the fracture. Maybe I (or some subsequent "helper") pinched the o-ring attaching the hose to the connector during the last two years and it finally gave way.

I'm finally getting to the point...

Having decided it was cheap Chinese nitrile, I figured I'd replace it with a nice Viton o-ring.
But since it was maybe a pinch, something made me experiment.

I put a smooth round brass spade in the vise and slipped one each of new nitrile, EPDM and Viton oring over the shaft. Engaging the similarly smooth, round hook of my digital scale in the oring, I gently pulled until the o-ring broke. Here are the results:
Nitrile: 6.2#
EPDM: 6.1#
Viton: 3.1# !!!
Same results twice +/- 0.2#
Maybe I HAD put Viton on that hose when I built my buddy's set, and somewhere along the line that more fragile material had taken a hit...

All my enthusiasm for using Viton o-rings for their 20+ year shelf life has just gotten called into question. What use is a "permanent" and less flammable oring material if its malleabllility is that poor? Maybe there's a reason my JJ-CCR has nitrile o-rings, even if their shelf life is only 5 years...

FWIW, I had the same thing happen in the middle of my Blackbeard's trip this winter on my 110deg angle and male QR stem. They were the low-cost ones (I forget which of the 2 major FL online dive-gear retailers - could be one from each) and NOT Omni-Swivels. I was surprised at the double-break but did not investigate material as it happened while gearing up for a dive. SAD Kit to the rescue - of course the new ones are mass-market Viton orings and were probably sourced from the East.
OP

Depending upon the batch, they were either direct from The Oring Store LLC, or secondarily sourced thru McMaster-Carr. Both very large US suppliers.

But the tensile strength can vary according to the FKM composition. I was just surprised at the variance between two compounds of roughly the same Shore value.

But you make a good point. I'll test both suppliers and see if there's a difference.

I seen this most often with viton even on new hoses but some just go on forever. I think is more about checking things more often than anything traceable.

Where did you get a shelf life of 5 yrs for nitrile? All the searches I have done say 15 yrs, plenty long enough for scuba duty. I have never understood the big deal with viton orings. Sure they have a longer life span when subjected to higher O2 levels but unless you are really stretching the time between servicing it really does not matter. High O2 is a different matter but for 36-32 nitrox I don't seen the need. Same goes for expensive O2 lubes.
herman
OP

No argument there, Herman. I've been told the same thing. I just picked the shortest of the printed opinions (if you don't store at proper temp, or are exposed to light/ozone, etc). Just like 20 years for Viton, which I've been told is really forever.
But that tensile strength. I just don't know.

rsingler:
So the then-new hose was at most 2 years old and had never seen any dynamic motion, since it was attached to the right angle connector.
Click to expand...

Likely a contributing factor. Not the right angle connector per se but the lack of rotation. I tend to grease the dynamic joints in IP hoses more liberally, SPG spools too.

I suspect it it didn't get soaked on dive vacations too. The man needs a basic O-ring primmer.

1: O-rings for Divers Question: I'm a recreational diver. Why should I care about O-rings? Answer: For starters, an O-ring failure could empty your Scuba tank in about a minute. (Table Reprinted by permission) This table appeared in Life Ending Seconds, 3000 to Zero in 72 Seconds, Advanced...


rsingler:
I figured I'd replace it with a nice Viton o-ring.
Click to expand...

We NEVER used Viton O-rings on any of the sat systems I worked on unless it was Oxygen service, and usually HP Oxygen. EPTM and Nitrile were preferred by a large margin. Not a Viton fan.
Click Here: ScubaBoard needs your help...​
OP

Any thoughts about that huge tensile strength difference, @Akimbo ?

rsingler:
But that tensile strength. I just don't know.
Click to expand...

Our dislike of Viton is because it takes a set much faster and gets brittle more than EPTM or Nitrile. Tensile strength only comes into play when the O-ring starts to extrude, when you are in trouble anyway. 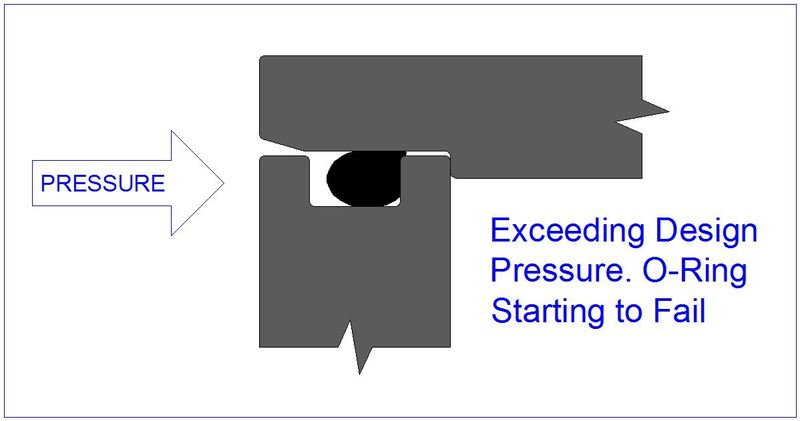