What is this HP seat?

Got a bunch of these years ago from a guy who seemed to specialize in USD, TUSA, and Poseidon. The bag was hand marked TR-911, but someone scratched out the TR.

They are about the size of the seats for many piston regs, about 1/2 inch across.

I'd like to pass them along if I knew how to describe them.
N

The TR-350/390 service manual from the '90s shows the part number 11075 for the HP seat. The pic of the seat looks black, with 4 sorta wedge-shaped protrusions around the perimeter of the core of the puck. So not identical to this, but somewhat similar. Could these be an earlier or later variant of the seat I wonder?
N

They look like yours but yellowed from age. The part number could be wrong but the other TUSA parts I have all seem to have correct numbers. 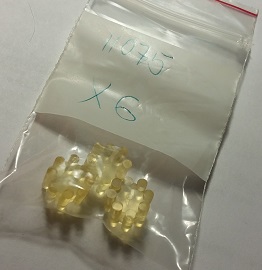