Titanium is nice and light and corrosion resistant, but it doesn't hold a very good edge due to its softness.
On the other hand; stainless doesn't seem so stainless when it comes to ocean water exposure.
Why doesn't anyone make a tungsten carbide knife? It's more shatter prone/brittle, but it holds a great edge and doesn't rust....

I haven't been able to find one for scuba (sheath/serrated combo edge) - I'd think it would be a good application for it, what am I missing?

In what scenario do you envision needing such a sharp edge while diving?

Fishhy:
Titanium is nice and light and corrosion resistant, but it doesn't hold a very good edge due to its softness.
On the other hand; stainless doesn't seem so stainless when it comes to ocean water exposure.
Click to expand...

Not familiar with the tungsten carbide option. Posting to point out you've got some other rust-resistant options. Spyderco has some knives with H1 steel, and I recently learned the LC200N is another option. Dive Knife Material vs. Corrosion: Titanium, H1, LC200N

You got me curious and I went Googling to find out more. Per KnifeNews.com 7-11-16 article Sandrin Makes the World’s First Tungsten Carbide Knives:
Tungsten carbide has been used in industrial cutting applications for nearly a century. In such a setting, where cuts are controllable and repeatable, its high durability and wear resistance allow it to outperform steel tools, cutting faster and leaving a better surface finish on machined parts.

The same properties that make tungsten carbide a great cutter also make it difficult to work with as material for a knife’s blade. Standard abrasives and manufacturing processes used to grind steel can’t handle tungsten carbide. “It has to be surface-ground, not machined, using diamond abrasives,” explains Rob Bianchin of Cabot Guns, who is working to widen the distribution of Sandrin products.

The biggest obstacle is that tungsten carbide is more brittle than steel. Experimental knives that have used a tungsten carbide compensate by either sandwiching it between stronger materials, or depositing just a thin layer directly onto the cutting edge.

Not so with Sandrin’s blades, which are solid pieces of tungsten carbide. Tungsten carbide’s natural brittleness is overcome by Sandrin’s proprietary formulation of the metal. “Sandrin uses a patented mixture that makes it possible,” says Bianchin. By keeping the Rockwell hardness at 71, Sandrin maintains blade strength and edge stability. The end result is a knife that gets and stays sharp. “The longevity of the cutting edge on a tungsten carbide knife is many, many times greater than steel,” says Bianchin.
GearJunkie.com's article on knife metals that resist corrosion claims:

An outfit from Italy called Sandrin released a line of tungsten carbide knives. It swaps out carbon and replaces it with tungsten.

The result is an exceptionally hard knife (70-75 HRc) that cannot rust in the traditional sense. The incredibly challenging nature of the material in the machining process makes these knives uber pricey — all of Sandrin’s offerings are close to $1,000.

KnifeSteelNerds.com Nov. 18, 2019 had this to say in conclusion on Sandrin Carbide:
With the carbide knives being limited to Sandrin at this point, whether or not you want one may depend on whether you like the designs of the available knives. However, I think we know enough about the properties of cemented tungsten carbide to talk generally about the properties of the material. It is high in hardness, wear resistance, and therefore slicing edge retention. The toughness is low when compared to typical steel, and probably lower than even many of the steels capable of similar hardness. Sharpenability is likely poor. So it offers maximal edge retention at the cost of many other properties. If that is a quality you desire and you like the knives then give it a try and see what you think.
TheGadgetFlow.com has an article, TungstenKnight Hybrid Blade Hunting Knife is a high-performance multipurpose knife, that offers a $118 pre-order price, claiming the blade's made of tungsten carbide offered at a much lower cost than other tungsten carbide knives. It says "It's perfect for scuba diving, camping..." But it lists as 'discovered' 5-16-2019, so why does it still show a pre-order price? It was a Kickstarter campaign product.

Sandrin's tungsten carbide knife that most resembles some dive knives to my glancing eye is the foldable Torino, 6.88 inches when extended, for $220.


Fishhy:
Why doesn't anyone make a tungsten carbide knife? It's more shatter prone/brittle, but it holds a great edge and doesn't rust....
Click to expand...

A few questions for you, since you're more familiar with the product:

1.) It's my understanding form reading it's very strong; is this shatter prone/brittle thing a real world problem, or just a theoretical concern vs. alternatives?

2.) Sounds like it may be more expensive than titanium or H1 steel. What advantages does it offer over H1 steel?

In theory, a rust-proof, sharp, highly durable knife that'll never need to be sharpened again (one hopes) sounds great. But if it's at higher cost than H1 steel competitors, perhaps we need to divide knife-using divers into 2 groups:

1.) Divers who carry a knife in case of emergency and rarely use it.

2.) Divers who often use the knife - maybe they cut 'ghost net' or fishing line, clean fish, use it as a pocket knife topside, etc...

I have a Spyderco H1 folding knife that I've had for years, no rust at all. (Since I've never had the occasion to open it under water, it's just as sharp as the day I bought it.)
OP

lexvil:
In what scenario do you envision needing such a sharp edge while diving?
Click to expand...

Might be used to dispatch fish, or cut leader material. I just don't want to have baby the edge...
Might even use it at home for other things when not diving (fishing, etc)
Tungsten Carbide is one of the hardest materials available so it should be durable too.
It's apparently pretty hard to work with which is probably why there aren't very many of them; but a full marine environment seems like a good use case.

I'll have a look at the H1 steel, thanks

I just got some of these. Now to take one and treat it to a little salt water and see what happens. I expect normal rust.

broncobowsher:
I just got some of these. Now to take one and treat it to a little salt water and see what happens. I expect normal rust.
Click to expand...

Under the questions and answers, that Amazon page had this:
"This blade uses a "sputtered" manufacturing technique which deposits a thin, sharp edge only layer of tungsten carbide that is then sharpened. These last me at least 4 to 5 times longer than a normal steel utility knife blade. I cut a huge number of cardboard boxes and wouldn't go back to the other blades, though I have many leftover that will become "Yard Sale" giveaways. I highly recommend these blades! see less
By David Rocks on April 8, 2021" 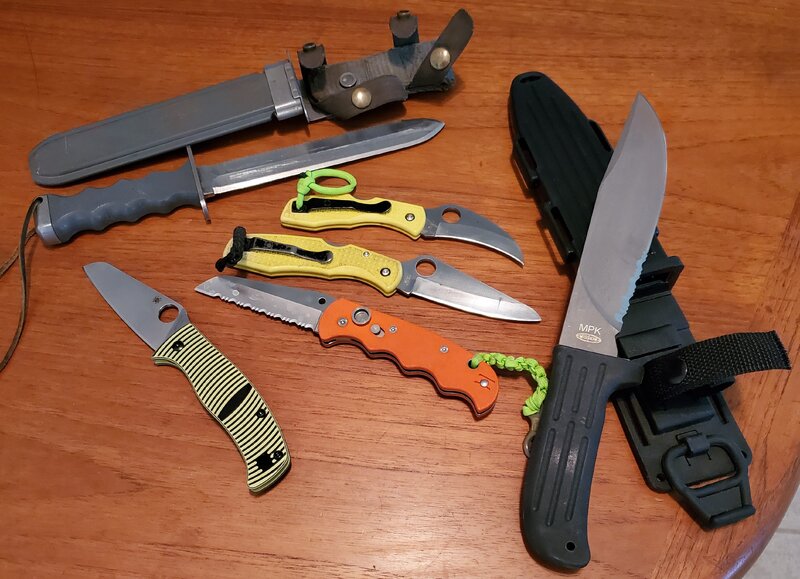 The King of the Sea Poseidon Rules

Another option, is to take knives or cutting tools you don't mind if they take some abuse.

Making a sheath is also an option, if the knife doesn't come with one.

Several months ago, I wanted a serious cutting-device capable of easily handling rope, and ended up buying some 10-inch shears. (more info in this thread) The first sheath I made ended up looking like this, and worked quite well. Features include a 2-inch slot for webbing in the back, a...

broncobowsher:
I just got some of these. Now to take one and treat it to a little salt water and see what happens. I expect normal rust.

Some of the guys where I work use razor knives / box cutters in and around the water and sometimes they work OK, but I would rather have a larger cutting area / blade. They rust but they also wear out relatively quickly so rust is not really an issue, because they get thrown out long before they are degraded by rust.
The King of the Sea Poseidon Rules

Rule number Nine - Always carry a knife.
You must log in or register to reply here.

For Sale Knives and cutting tools- take your pick or bundle