How does the new magnetic chip work while using a DPV? The SK7s worked fine if you mounted them on the nose cone (Seadoo) to get away from the EMF of the motor.
Michael
Course Director
Owner: Dive Kwaj
Facebook/DiveKwaj

SK7 is not reliable
for the 2 i used : after 3-4 years, a bubble appears, and the compass doesn't work anymore, frozen, under pressure.
never more.

my no-name compass is always working after 10 years.

DuboisP:
SK7 is not reliable
for the 2 i used : after 3-4 years, a bubble appears, and the compass doesn't work anymore, frozen, under pressure.
never more.

my no-name compass is always working after 10 years.
Click to expand...

I have either a sk7 or sk8, how do I tell one from the other? 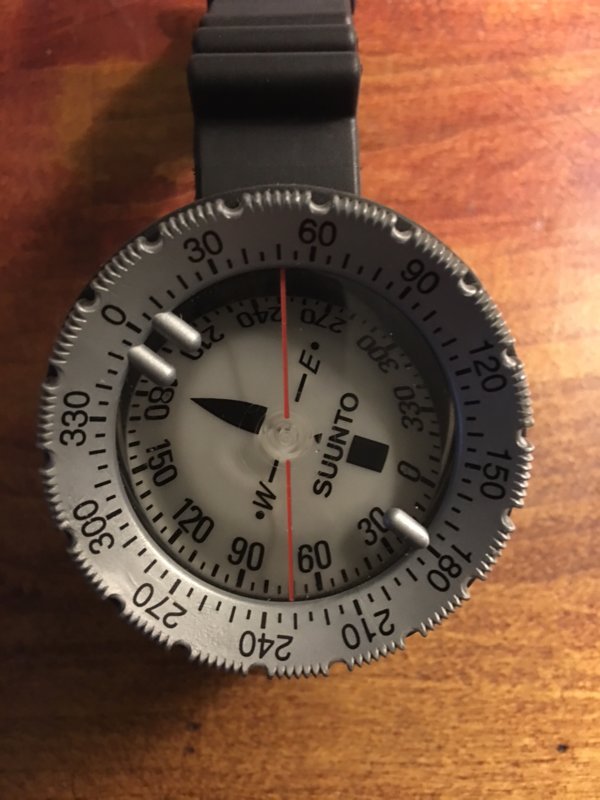 From what I have seen, the SK7 (which I own a couple of), has a gray bezel and the SK8s that I have seen in person (fellow club members) and shops have a more silvery looking bezel.

If you take the compass capsule out from the protective boot so you can see the underside of the card, you should be able to see the magnetic chip on one side (north/south) of the floating card in the SK8...I have pulled my SK7 capsule to check the NH/SH model orientation and did not see a chip...so I assume no chip = SK7, chip = SK8.

Both the SK7 and SK8 seem to suffer the same fatality of developing hairline cracks in the face of the capsule which causes the oil to leak out and an air bubble to form. The bubble eventually becomes big enough that it jams up the rotating card at depth making the compass useless.

Depth and pressure gauges with lexan/plastic capsules seem to be indestructible compared to the craptastic plastic that Suunto is using for their compass capsules.

-Z
"Endeavor to exit the water more competent, confident and capable than when you entered it."

thanks for the info.
You must log in or register to reply here.

Is a SK8 compass puck compatible with a DSS mount for a SK7?