TLDR: I collected a list of reg stow mechanisms with short pro/con and links. Comments welcome.

Background: Tbone's thread, A need to rehash our discussion on primary donate, focused on beyond single or double back mount, prompted thinking about the options for frequent reg stow and release with fast OOG response. Sub optimal to primary donate necklace secondary, but sometimes needed. Specifically for double sidemount, where having primary donate with necklace secondary 100% of the dive can conflict with other safety goals in some environments. Double hose and rebreather can have a similar secondary donate issue, though without the need of frequent restow.

This post: I collected this list to see if I'm missing options, and for others future reference. I already use a decent method from it and all of this is already sprinkled throughout the sidemount forum. But collecting it seemed valuable. I grouped them into categories. Ignoring hose routing as much as possible. Just looking at how to get the reg to stay or release when desired.

I didn't post it in basic as I think primary donate necklaced secondary is a great single tank solution, even if not often taught yet. Adding a discussion in basic of "You should primary donate, but how *would* you use/restow/donate a non-necklace secondary if you had to?" seems counter productive. The Z system has threads debating its merits. This thread, or just post, is about options for frequent stow/release of regs with fast OOG response. And I say response, not necessarily just release, as the regs are your backups not just your buddies.

Fast reg release seems prudent in mixed teams or with nearby single tank divers. I think mixed teams, and the need to donate, is common for new sidemount divers, certainly those starting sidemount as rec. divers. I dive two tank OW sidemount, always in mixed teams or solo. It isn't always needed, such as deep in an overhead where everyone has multiple gas sources.

Tied with cave line to a bolt-snap and clipped to chest D ring (normal backmount storage on surface)
- pro: simple, little chance to lose
- con: unclip may fumble from cold, haste, or gloves (not a good release ease)

Breakaway cord/o-ring/tiny-ziptie
- pro: can break free in emergency
- con: may break free on own, or degrade in sun

On tank. Hose under bungee loops on tank, like a stage
- pro: clean, free to deploy
- con: longer to restow, may move about and need to find it

Mouthpiece in 'octo' type holder, such as a bungee loop.
- pro: easy to pull free
- con: hard to tuck each time

Necklace with a left reg, a spacer, a right reg Why not two 7ft hoses when sidemount diving
- pro: donate either from mouth, hose feeds from its own side
- con: hose drag in current/snags

Let reg dangle down after crossing behind neck
- pro: easy access if it did not move, a quick 'storage' solution
- con: if you roll you may lose it behind you

Loose (ie straight up from that side)
- pro: easy donate, simple hose routing
- con: restrictions can snag and pull free, drag on reg if scootering

Around back of neck
- pro: a snag pulls on neck so not lose reg, supports weight of reg so less jaw effort
- con: need tiny head dip to donate, can only donate topmost behind neck hose

Necklace
- pro: can't go far, depending on knot tightness, right there if lose other reg
- con: must pull free to donate

or the sexy way. Totally stolen from Dive Gear Express years ago, but it's still the best way IMO. Unfortunately it's really only compatible with the Jetstream... 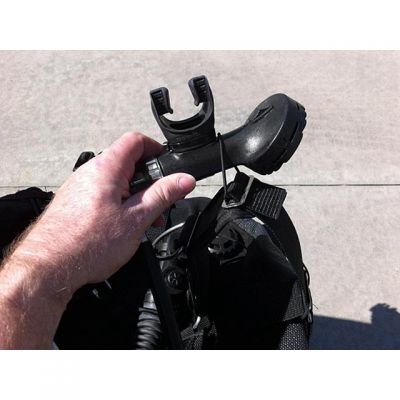 tbone1004:
or the sexy way. Totally stolen from Dive Gear Express years ago, but it's still the best way IMO. Unfortunately it's really only compatible with the Jetstream...

Thanks, I had that under tucked on strap. But with Xstream also. I updated it.

MichaelMc:
Thanks, I had that under tucked on strap. But with Xstream also. I updated it.
Click to expand...

touche, somehow I missed that.... Definitely my preferred method! It will hold an xstream or the Oceanic Omega type regs, but the bungee has to be reasonably snug for those two
M

And do a little tackeling on the hose to keep it from creeping.

When lots of people on ScubaBoard are telling you that something is a bad idea and you might die if you do it. You probably shouldn't do it cause you're gonna die.

My method (I think this is pretty common):

Long hose on right side with no swivel goes around neck on top of short hose. Short hose on left has a 90 swivel and goes around neck under the long hose. For donate, reach for the long hose in you mouth. If you are on the short hose you miss it because of the swivel. Now you hand is automatically on top of your long hose reg that is clipped to the right shoulder. Grab it and pull it loose as it is on a breakaway clip.

I'm currently using an O-ring breakaway, but have order the Razor reusable ones to try.
You must log in or register to reply here.

C
For Sale Canadian Dollars but tons of gear !!
2 3