I've got the choice of getting my refurbed Oceanus with a 230bar or 300 bar PSV, or with both plus a change over device.

As I understand it, if I have the 300 bar PSV, even if I'm filling my tanks to 230 bar, the filter tower will cycle to 300 bar (is this only when the fill valve is closed, and the pressure builds up in the whip?)

I think I'm pretty clear that when the changeover device is closed, essentially the 230bar PSV and the 2nd whip are isolated.

But what happens when the changeover device is opened?

Will I be able to use both fill whips simulateously? (Both at 230 bar?)
Will the filter tower pressure be released at 232 via the PSV on the changeover, meaning that the filter tower is cycled at 230bar instead of 300bar?
-= Mark 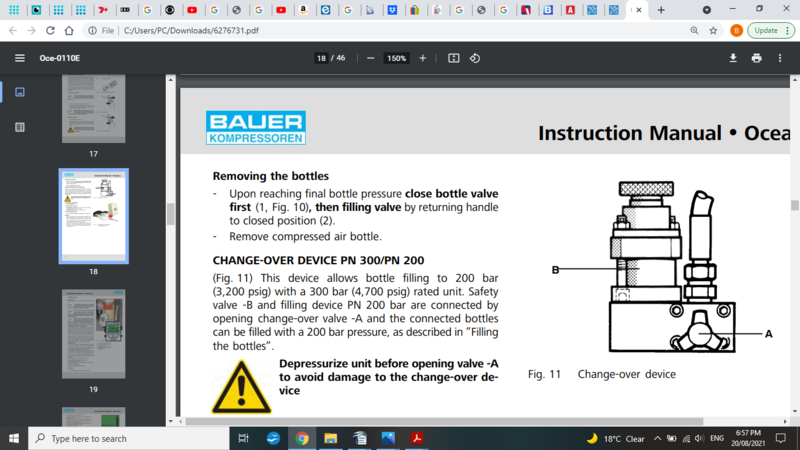 20,000 leagues under the sea diving to adventure
in a silent world with my ceiling the waves....Emile

@happy-diver I have the manual, and have read that section. But it doesn't really answer my questions, hence my reaching out to the collective mind here at SB.
-= Mark 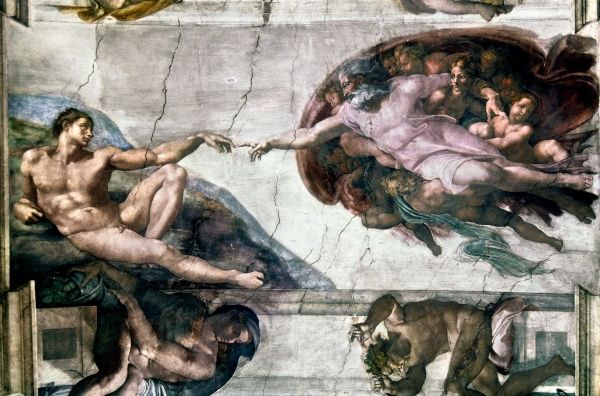 I thought you were an Aussie mate

The bottom safety valve is the lower pressure, the top one high with the change over valve switching both whips between the two

That's what the manual says mate

I like it!
20,000 leagues under the sea diving to adventure
in a silent world with my ceiling the waves....Emile

Yeah I am an Aussie. Should that imply that I should know enough to not have to ask questions?

The language in that section of the manual does imply that both hoses are switched to the higher pressure, however earlier in the manual there is this diagram: 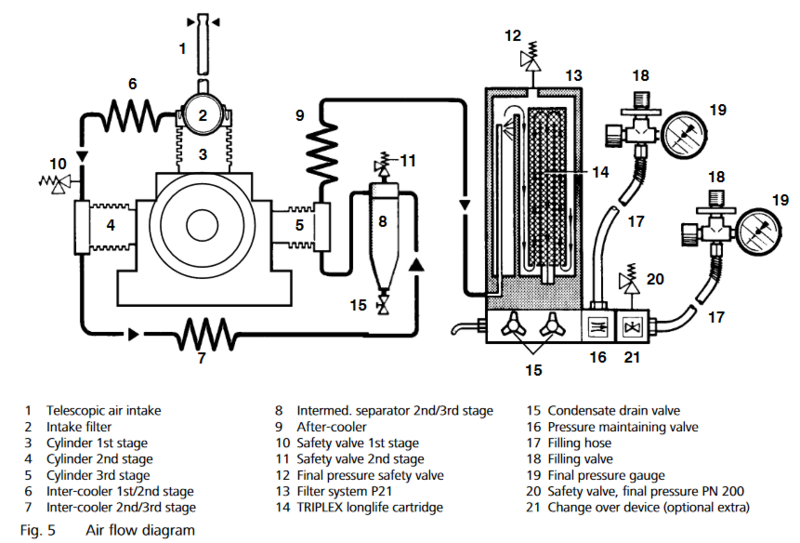 Which seems to imply that the changeover device is attached *after* the PMV and the first hose.. and following the diagram, it seems that if the changeover is closed, that also blocks off the second whip. Or does the changeover only open/close the a valve to the PSV?

I'm guessing it doesn't really matter where in the system the PSV is.. if the changeover is opened, that adds a 230bar relief valve into the system, so that will blow no matter which fill hose is in use.

The second part to my question was around the filter tower pressure cycles. The filter tower lifetime is reduced almost 10-fold when operated at 300bar vs 225bar. If I have a 300bar PSV on the filter tower, in reference to filter tower cycles, if I only fill my tanks to 220-230 bar is the compressor operating at 230 or 300bar? Even if the only time the filter will reach 300bar is when I close the tank valves to switch to the next tank, is that sufficient stress on the tower to be considered 300bar operation (I'm thinking yes, because the stress is cycles, not time at pressure)

With respect to filter tower cycles, am I better off having the changeover device, and leaving it open until I want a fill >230 bar? Or just stick with the 300bar PSV with no changeover?

... I'm probably making this a whole lot more complicated than I need to ... but I have a curious mind, and I like to know everything about how stuff works ...
-= Mark

@stiebs Hopefully this clarifies some things.
PMV /= PSV. They incidentally both work in a very similar fashion in that they are downstream valves designed to maintain pressure, but they are two separate devices with very different purposes.

PMV is a pressure MAINTAINING valve and is located right after the filters. It is set somewhere around 150bar ish which maintains pressure inside of the filter stack. Regulators like your first stage maintain a certain IP regardless of tank pressure, and a PMV is a backwards regulator that maintains some minimum pressure behind it and once that pressure is reached, it lets gas through. I.e. if the compressor is at 100bar, it will keep running with 0 air coming out of the whips until it hits 150bar, then once it hits 150bar, it will maintain that 150bar behind the PMV even if the tank it is filling is empty. This is the MOST critical part of your filter system and often times the least understood. The PMV is placed AFTER the filter system, but BEFORE and pressure regulating devices and whips. It is usually screwed into the final filter tower and then any fill whips or regulators are screwed into it as shown in the diagram you linked above

PSV is a pressure SAFETY valve and is also called a pressure relief valve/PRV or just overpressure valve/OPV. It is a legal requirement for safety to make sure that pressure above the working pressure of a vessel is bled so it doesn't explode. On a scuba valve it is a burst disc, on first stages it may be built in like Poseidon, be screwed into a LP port like on most argon/CCR O2 bottles, or the system will use a downstream valve like a second stage to bleed excess pressure. These OPV's are typically set a bit above the working pressure of the system. On a compressor that may be 300bar if it is filling HP bottles from Europe or bank systems, 250bar, 200bar if only filling AL80's, etc etc but all it is doing is setting that overpressure valve so the system does not build excess pressure. It is a safety device and is usually used in conjunction with a pressure switch that will turn the pump off before the valve releases.

The changeover device is a fixed pressure regulator, basically a scuba first stage that has an outlet pressure set to 230bar.

In Europe, there are actually different DIN fill ends for both 200 and 300bar. They use short DIN for 200bar which will not screw into a 300bar valve because it only has 5 threads instead of 7 so it won't seat, and their 300bar whips have a nipple on the end that prevents them from seating into a 200bar valve. We do not use these in the US and our DIN whips look exactly like a regulator din connection which is universal. Bauer is a German company and has to comply with CE so they have a changeover device option to allow you to fill both types of tank valves off of the same compressor.

In terms of filling. Your compressor won't really notice or care whether the device is open or not. The PMV will force the compressor to pump at a minimum of 150bar, and once it is above that, it will fill the tanks until you turn it off, or turn the fill valve off and it runs until it hits the cutoff pressure. The PSV on the changeover device is there to protect the whips and tank from high pressure if the regulator itself fails and has high pressure creep, the same phenomenon that our scuba first stages are prone to

Personally? I would get the 300bar setting, use a "normal" DIN whip that will fill either style of tank valve, and just pay attention when filling and/or add either an adjustable pressure cutoff switch so the pump itself cuts off at whatever pressure you want, or add an adjustable regulator so you can control the pressure that the tank fills to.

@tbone1004 thanks for your verbose explanation. That pretty much confirms everything I already know. I'm aware of what a PMV does vs a PSV, and I'm pretty sure my post didn't show any confusion there.


tbone1004 said:
The changeover device is a fixed pressure regulator, basically a scuba first stage that has an outlet pressure set to 230bar.
Click to expand...

I don't believe you are correct. The changeover device has a valve and a secondary PSV attached, which is what limits the whip pressure to 200bar.

Maybe I need to restate my knowledge/understanding gap more clearly.

Here is what I'm seeking clarification on:

If I only have a 300bar PSV/OPV/PRV whatever you want to call it on the filter tower, I assume that the 300bar pressure relief will be reached even if I stop filling my cyclinder at 230bar (ie, monitor tank pressure; reaches 230bar; close valve; filter tower pressure will continue to increase until I change cylinder and re-open valve or turn off compressor. This will effectively reduce the life of the tower.

So on the infrequent occasions when I want to fill >230 bar, I close the changeover device, thereby removing the 230bar relief, and the filter tower will cycle up to 300bar, thereby reducing its serviceable life.
-= Mark

@stiebs if you are trying to maximize service life of the towers, you don't want to be blowing out the OPV's all the time, that is not good for them, put a pressure cutoff switch and set it to whatever pressure you want the pump to cut off at, 275bar is about as high as it is worth pumping, even with bank bottles.

See the Kolbenkpl. assembly No 60 dude
Well when you screw the knebelgriff No 90 fully anti clockwise
the pressure from the filter, pmv is released through item 20 the Spindelaufnahme.
From there the air hangs a right, our left to the big untapped hole where the 225 Sicherheitsventil sits This same air also goes up through the verschraubung, to the umimam fill hose
and obviously if your port to the 225 Sicherheitsventil is open this will blow first.


A partial schematic of two of them Being re-loved post previous, common operator-fiddlers that shouldn't touch stuff butchery
20,000 leagues under the sea diving to adventure
in a silent world with my ceiling the waves....Emile

The Low Setpoint myth (or misunderstanding)
2 3 4