It took me a bit to get this written up. I wanted to make sure of a couple of things to be as accurate as possible.

I received one of the new MAKO weight belts to evaluate. At first glance, I have to admit that I was skeptical because it looked so slick compared to the current model. I thought that my standard weights were going to slide right off. I thought this belt needed to use the pinch type free diving weights, or the user would have issues with lead sliding around.

After looking at how the buckle is attached and taking in the overall construction, I decided to see if my fears were warranted. So, grabbing a 4lb lead weight, I slid it on the belt through the slots. Then, doing what every other SCUBA instructor and I preach at students not to do, I picked the belt up by the buckle. Wearing my steel toe work boots, of course. The lead did not move. Not an inch. OK, on a standard nylon belt, this would result in a loud noise, something broken, and possibly blood if the foot was not protected.

Just how much can I do this with? As it turns out, 30lbs of lead stays on just fine. I didn’t try any more than that. One thing that much lead does is use up a lot of length on the belt. I ended up going to the pool and putting 18lbs on it in the form of three 4-pound weights and three 2-pound weights with a 5 mil suit. I have a 34-inch waist, and I had belt length leftover to put through the buckle and leave enough for an acceptable margin of release safety.

For a larger individual or with more weights, it could get close. I usually set my MAKO belts up with pockets to drop individual blocks or lead pouches and change amounts quickly. I could be using the belt with anything from a shorty to a 5 mill MAKO FJ freediving suit to a shell drysuit. So the ability to change lead easily and fast is a must. This also has the effect of not shortening the length to any noticeable degree.

In the pool, I found that the weights on the belt still did not shift. A standard belt requires the nylon to be twisted or keepers used to stop the lead from sliding around. Not this belt. The lead does not move, and being so flexible, it retains the ability to compress with the exposure suit.

This is a must for me with belts. I’ve been spoiled by the MAKO belts in general in this regard. So much so that I own four of them. Two I purchased myself, and two were given to me by someone who stopped diving. They are the only belts I recommend to students. The only ones I have ever recommended since discovering them.

I am known for not getting my students to spend more than they absolutely have to. So save two items: Masks, because it has to fit and if it’s an expensive one that’s the one they need. And weight belts, I only recommend MAKO belts. They can indeed get a $7.00 nylon belt. But it won’t be as useful, versatile, comfortable, and in my opinion, safe as a MAKO rubber belt. Or one of the new compound belts. Putting aside the MAKO guarantee that if one ever has to ditch the belt in a true emergency, they only need to send a letter stating the facts, and MAKO will replace the lost belt and lead. Divers just need to realize that it works. And it works well.

The new color options are just icing on a delicious cake. The only thing I can’t attest to at this time is long-term durability. Due to our water being solid in the Northeast when I received it. And that the belt has only been newly produced. I don’t doubt that it will based on the use my other belts get and how they have held up over the years.

Edit: I have been using the belt for about 6 months now and no issues at all with it.

I have been using a marseillaise rubber belt for a few years now and am completely sold on their use for SCUBA.

Thanks for posting, now I need another one..the red one is calling me
Subsea Sports ... reel equipment for real divers

Great review. Thanks.​
I love the Mako rubber belt. I was hesitant at first due to cost, but I think they are great. The new silicon belts look interesting.​
​

Jim: Thanks very much for taking the time to write this detailed review.

Since this is a brand new product for us, we have decided to help introduce it with a sale for the next few days.

We have discounted the price down to $34.99. Our prices are generally significantly below a typical dive shop price (before our sales). 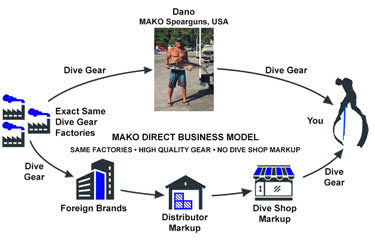 http://makospearguns.com/
http://www.facebook.com/makospearguns
HIGH PERFORMANCE GEAR - DIRECT FROM MAKO - NO DIVE SHOP MARKUP!
You must log in or register to reply here.