Infuriating (to me) scuba scene in a car commercial 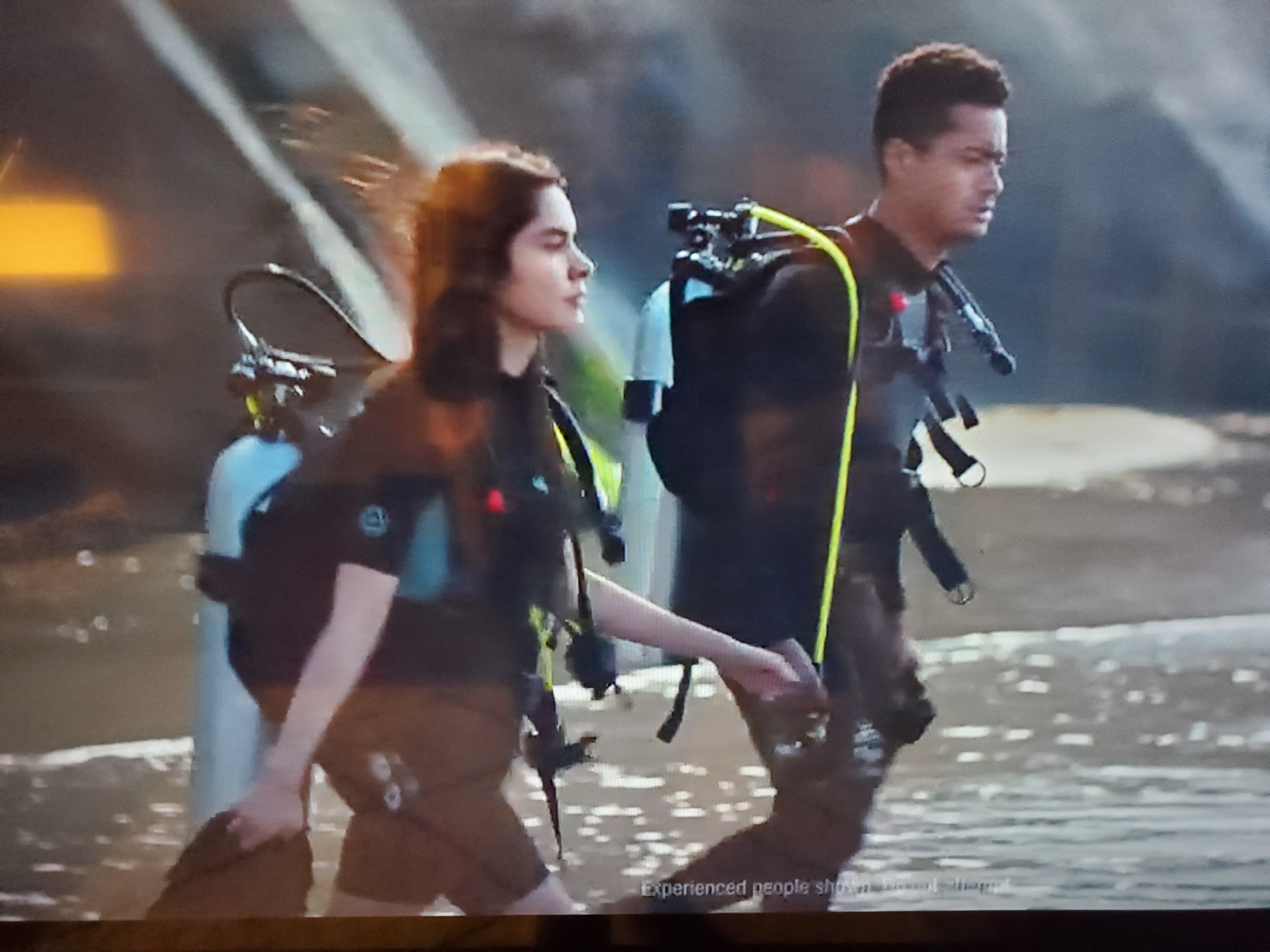 Couple in scuba gear walking on a beach; taken from a car advertisement
Oh, dear god. I paused this scene from a car commercial to get a closer look at this couple and their dive gear, and what I see makes me twitch.

The girl's tank is mounted backward, so the first-stage regulator is likewise backward. She's gonna bash her head on the yoke knob. Hard. Even worse, that orientation routes both her primary second-stage regulator hose and her backup reg hose to her left side; the regs will be upside down when she tries to use them, and she'll get a lungful of water.

The guy doesn't even appear to have a primary second stage regulator; all he has is a single backup reg, and that one's a mess. The hose drapes over his shoulder instead of hanging underneath it, and the reg is dangling free instead of being clipped off.

Neither the guy nor the girl has an air pressure gauge, depth gauge, timing device, or compass. Even Mike Nelson, that old-school he-man from Sea Hunt, carried more gear than this.

And finally, the commercial seems to imply these people are in California, where the water temps range from the high 50s up north through the mid-60s down south. Problem is, the girl is wearing a shorty suit, and those wetsuits look like they're only 3mm thick. Oh...and they're not wearing or carrying hoods. Here comes hypothermia!

To top off this horrorshow, the tiny disclaimer at screen bottom reads, "Experienced people shown. Do not attempt." Pfffft. More like "These utterly clueless models are about to die horribly. Do not attempt."

The water in Southern California is usually in the mid to lower 50s in the late Fall, and does drop into the 40s at times. I still occasionally see divers here without gloves or a hood. There was a student in my DM class who wore a shorty suit for our dives at the Coronados islands in the upper 40s.
I have no time to be offended by things that don't matter to me.___Wookie
My photos
Southern California Marine Life
Diving the Palos Verdes Peninsula
Instagram

You do know they are not going diving, right.

Bob DBF:
You do know they are not going diving, right.
Click to expand...

Yes, I'm reasonably sure that they're not. After all, are they even carrying fins?
" . . . the most singular difference between happiness and joy is that happiness is a solid and joy is a liquid." (partial quote from J.D. Salinger)

As far as regulators mounted backwards are concerned, I remember diving in the Azores 2 years ago, with a British guy, BSAC certified, who mounted his first stage that way.

Seeing my surprise, he told me it was standard BSAC procedures. We dived only once together so I've never figured he was kidding or not. Has anybody here BSAC experience and can confirm or not ?
The worst day diving is better than the best day working !
Tried to be normal once. The worst 2 minutes of my life !

Toooooo much tv, time for you to go diving.
R

@JMBL I've trained with BSAC and been a member of a couple of clubs. No, its not normal!

And their masks are not backward on their foreheads!!!!
A

JMBL:
As far as regulators mounted backwards are concerned, I remember diving in the Azores 2 years ago, with a British guy, BSAC certified, who mounted his first stage that way.

Seeing my surprise, he told me it was standard BSAC procedures. We dived only once together so I've never figured he was kidding or not. Has anybody here BSAC experience and can confirm or not ?
Click to expand...

He was probably confused by the rental gear. Octo generally routes to the left for BSAC (no idea if a standard). I guess if someone is faced with unfamiliar routing of it on the right they could think to rotate the first stage to have yellow on the left - at the expense of all else
You must log in or register to reply here.

For Sale Free to good home