No, I'm not referring to the group Def Leppard. I'm not a fan of heavy metal... unless it is gold. I just completed my 200th dive of the year and thought I'd comment on an unusual sighting from that dive (and #199). Not long ago 200 dives in a year would be a low point for me, but due to my cancers and the COVID closure of the dive park earlier this year, I'm pretty happy to have reached that number. It's twice what I reached last year.

As I was preparing to enter the water at our local dive park, I was informed that there was a dead leopard out in about 60 fsw. No, not the kind that prowls the various habitats of sub-Saharan Africa. I'm referring to our leopard shark (Triakis semifasciata), not to be confused with the leopard or zebra shark (Stegostoma fasciatum) of the tropical Indo-Pacific.

I headed out to find it and almost immediately saw the sad carcass of this five foot shark in about 45 fsw. Now leopard sharks are often very difficult to film close up to record morphological details. No, they're not dangerous (hardly!)... they are often very skittish of humans and bolt away upon hearing our bubbles. Hmm, maybe rebreather divers have better luck.

I was able to spend substantial time with this chondrichthyan (fancy word for sharks and rays for my landlubber readers). It was easy to film features such as the mottled saddles on their body, the gills, the vent (it was a female... no claspers) and the mouth. It had a major injury that undoubtedly caused death... unless it occurred post mortem. The right pectoral fin and a portion of its internal organs were ripped off the body.

At first I thought a larger, more aggressive shark may have been the killer. However, why would it just take a nibble instead of consuming the whole fish? Then I considered the possibility that one of our few remaining wreckfish (giant sea bass) might have tried for a "big gulp." Other species of wreckfish have been observed swallowing small sharks whole. They also don't have the big teeth that might leave more obvious marks on the carcass.

I left the park early after my two dives and went home to edit the video footage. As I toiled away on my computer, diver Keith Chu messaged me with stills and a video shot by Chris Beierschmitt that showed a wreckfish swimming off with the carcass of the leopard shark hanging out of its mouth. Now the wreckfish was about five feet long and so was the leopard shark (although much more svelte!). Apparently the wreckfish finally realized its imagination was much bigger than its mouth and spat the shark out.

As I mentioned, leopard sharks are real wussies and no threat to humans unless you stick your hand down their throat. Years ago I was kayaking with my two sisters around Frog Rock here on Catalina. We encountered a school of leopard sharks in the shallows. I jumped off my kayak and told the girls it was their chance to actually swim with sharks. They didn't accept that invitation!

As for the other "leopard" (or zebra) shark I mentioned, I might as well add a tale about them. Sadly I don't get paid by the word for my columns. Heck, in fact, I don't get paid at all these days! I was diving the Australian Great Barrier Reef about twenty years ago. I was preparing to enter the water on a night dive. As I started to do a giant stride off the stern of our live aboard, a large (~ 12 ft) zebra shark swam out from under the boat. I landed right on top of it. The poor shark took off like a rocket. I can hardly blame it!

Image caption: Our leopard shark and the leopard/zebra shark from the Indo-Pacific (courtesy of FredD and Wikimedia); dead leopard and close-up of injury; mouth and the electro-sensory ampules of Lorenzini. 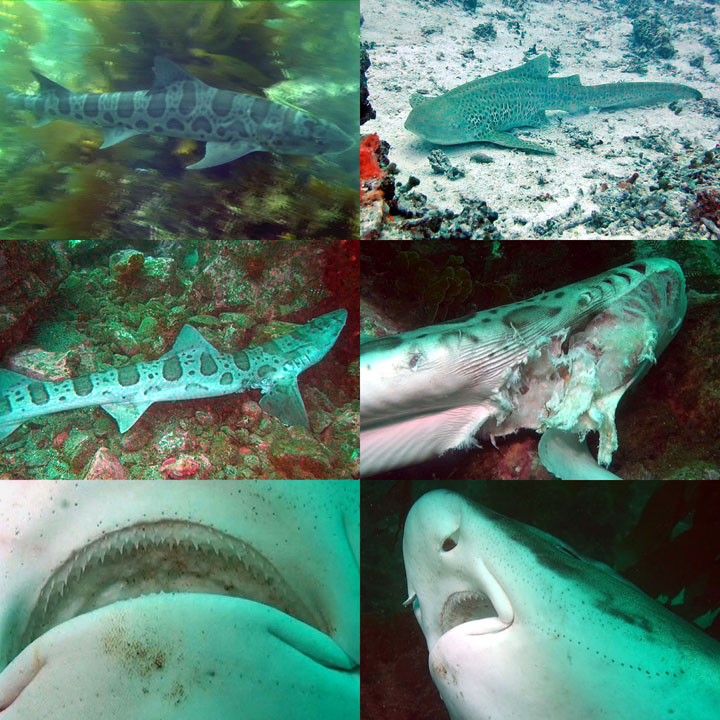