I had friends from Canada come down for two weeks. they had not been diving in awhile but their skills came back quickly.

The first two days we had mostly partly sunny weather, good visibility, warm water. We dove with Living Underwater the 14th and 15th since Raul with Bottom time Divers was full. The 15th saw some winds so the port opened late at 9 am.

Living Underwater had Steel 95s (no 120s) for me since I normally dive AL 100s which meant I could take off 4 lbs of lead. The buoyancy of the tanks is different from AL 100s which become more buoyant at the end of the dive. Pepe the DM is very friendly. SIs were at Palancar beach club. LU uses the old Caleta (marina).

The weather here has had alot of winds and rain, sometimes heavy. Street flooding has been common. I feel a bit sorry for the ironman competitors Sunday especially for the bike race which meant slick roads.

After the 15th we started diving with Raul and Bottom Time Divers. Since Santa Rosa and San Francisco are closed, there are alot of boats on the Palancars. For these dives I brought my camera. My Canadian friend just bought an UW camera setup and finally got all the pieces and parts together. It was his first time with a bigger rig, strobes and such so I spent the first few days configuring the camera and going over it's use. Later this week I hope to get him started on shooting in manual mode.
I picked up a sore throat and congestion so I intend to continue diving later in the week. The winds are supposed to pick up today and tomorrow so the port may be closed tomorrow. The new port captain is a bit more liberal.

Raul found the seahorse and pipehorse. We did see reef sharks at a distance but not close enough for good photos.
The visibility dropped a bit in the last few days and the current picked up significantly so I have less photos. Cedral wall and Tunich had fast currents, still to the north but just a bit swirly. Slower currents on the Palancars and Colombia.
With overcast weather, currents and darker conditions underwater the backscatter picked up and for whatever reason my white balance went to hell at times.

The parking at Fonatur marina is worse now as they are installing pipes along the north/south road so only one side is available for parking. If you arrive later in the morning, cars will be parked all the way to the roundabout to the north. 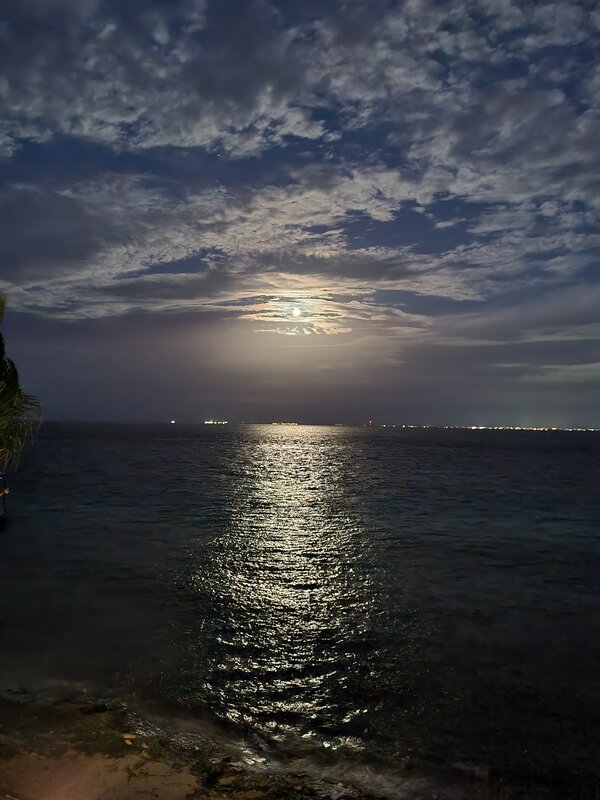 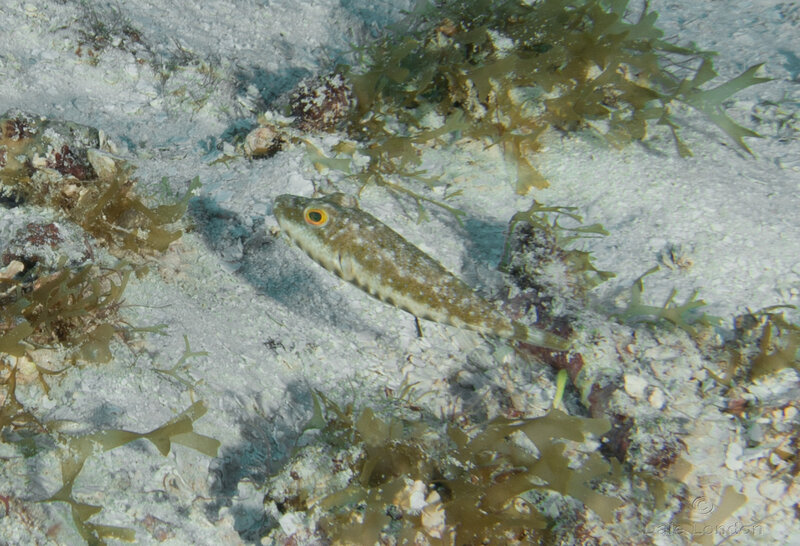 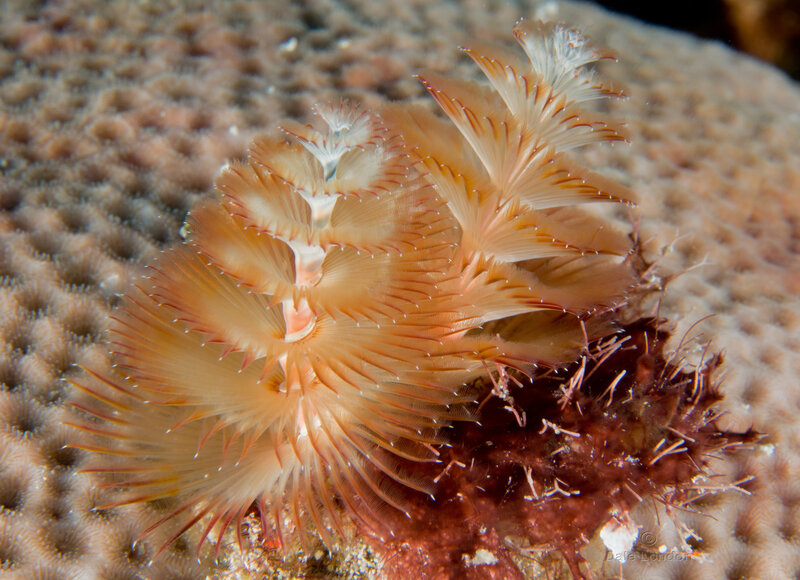 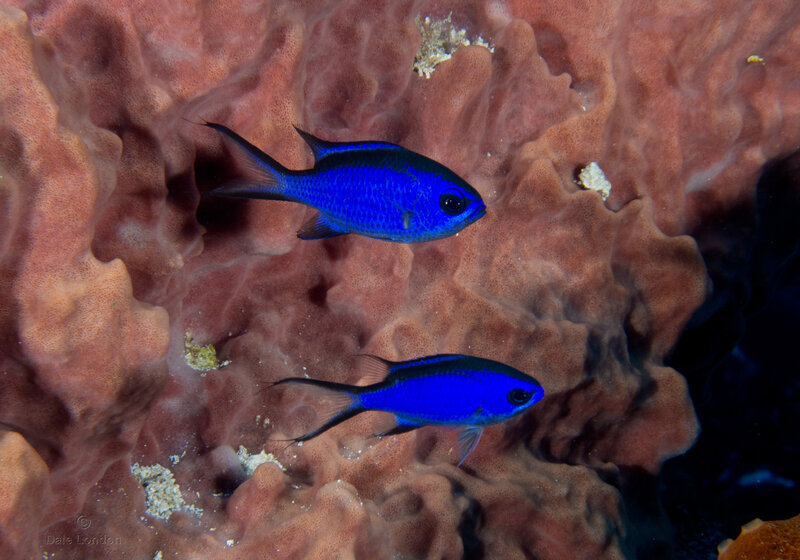 Cubera Snapper with friend. Though this has the two fangs on the top jaw as a Dog Snapper would have, there is no triangular mark under the eye and this snapper is larger than an average Dog snapper. Therefore I think is is a Cubera Snapper. 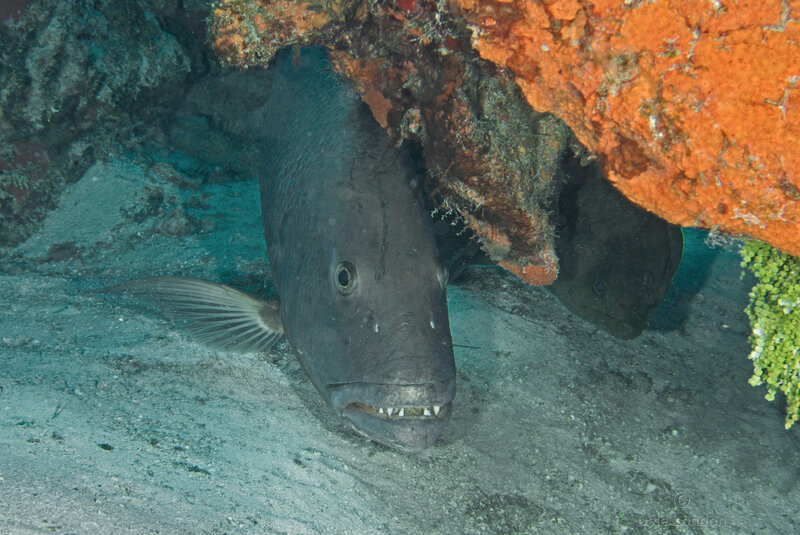 Goldentail Moray Eel. There have been many more Goldentails in the recent weeks than usual. 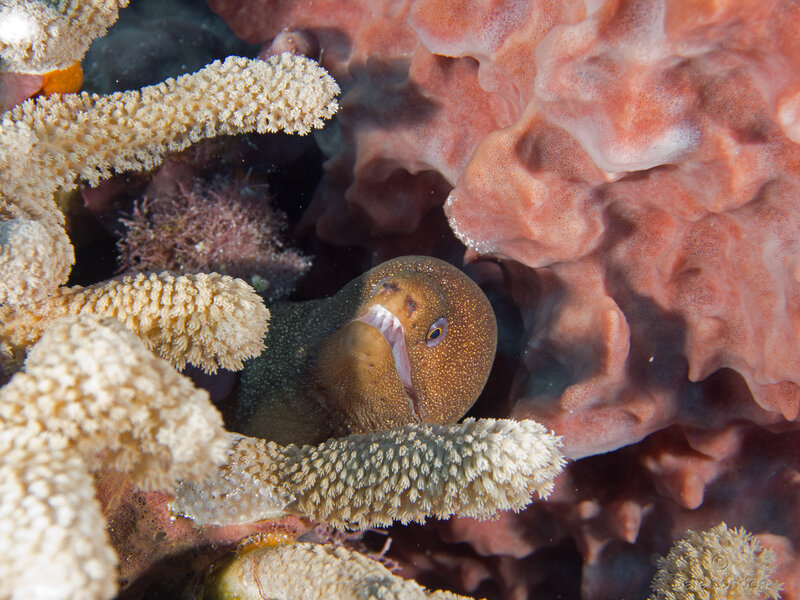 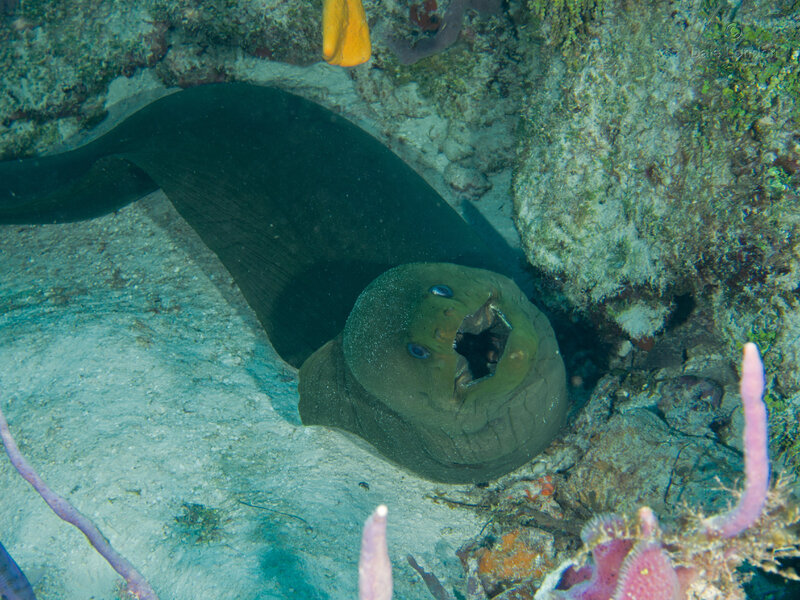 Seahorse (and small). First one I have seen in quite some time. 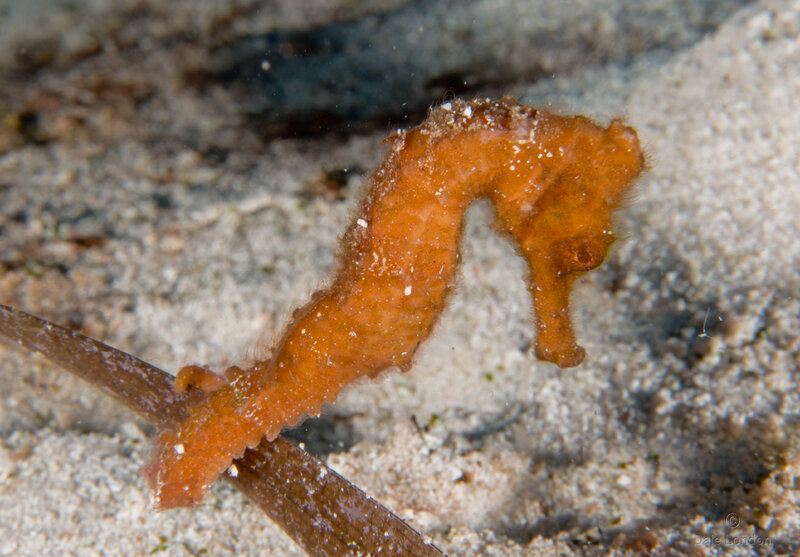 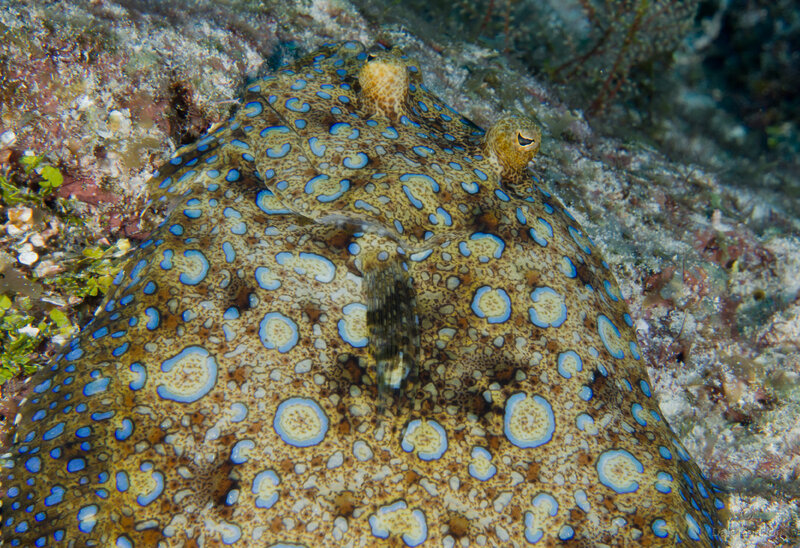 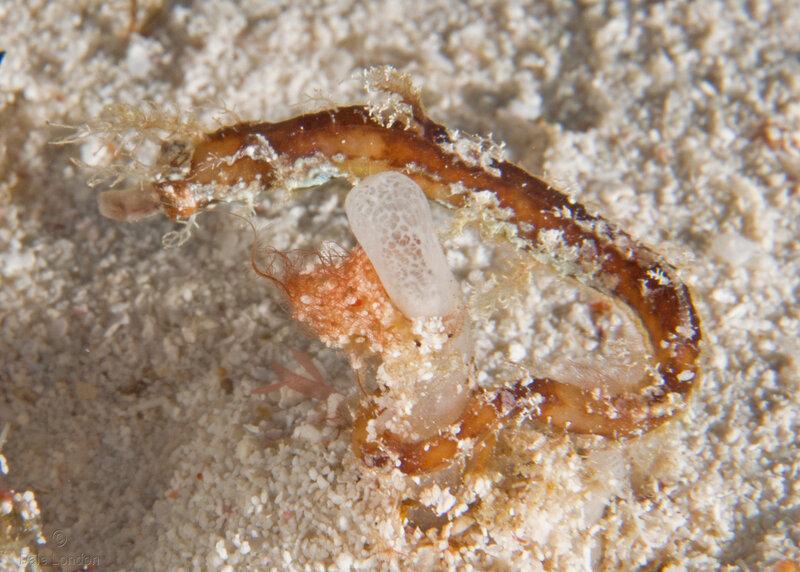 Also, if life doesn't give you water and sugar, your lemonade is gonna be terrible
OP

Visibility went way down and lots of particles in the water which is why I took few wide angle or open water photos.

Porcupinefish. I am getting the impression that it is mating season as I am seeing pairs of Balloonfish and Porcupinefish and often with one trying to avoid the other. 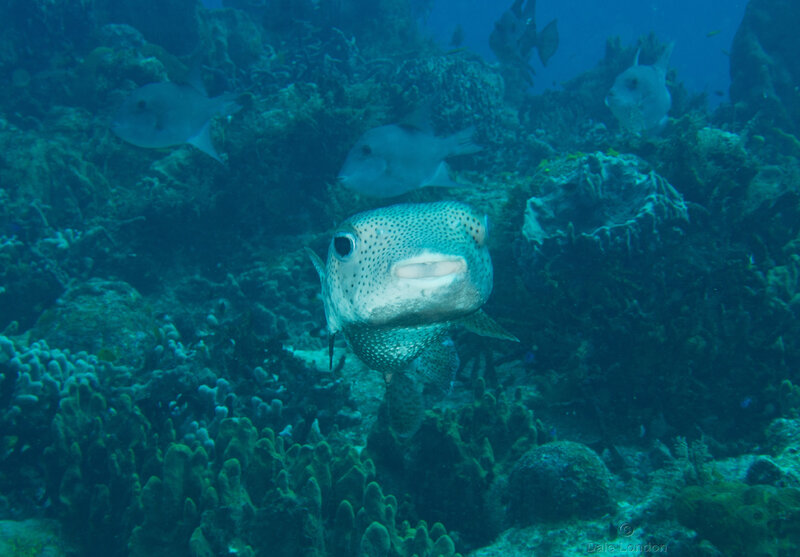 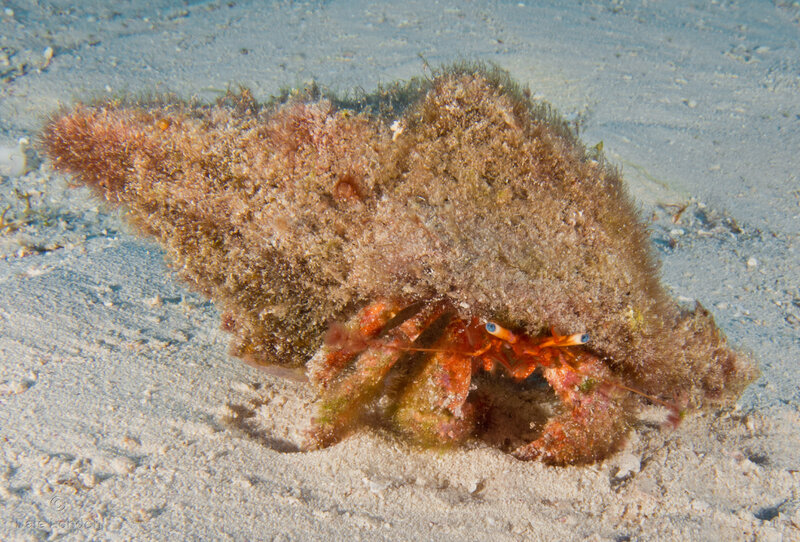 Sand Diver that didn't swim away 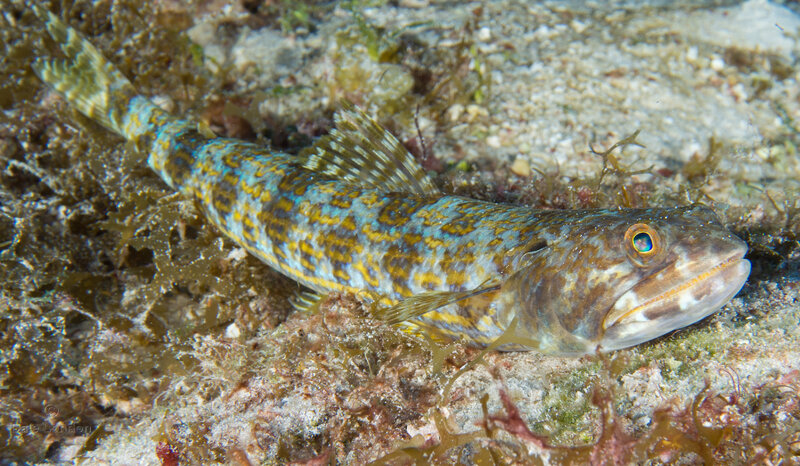 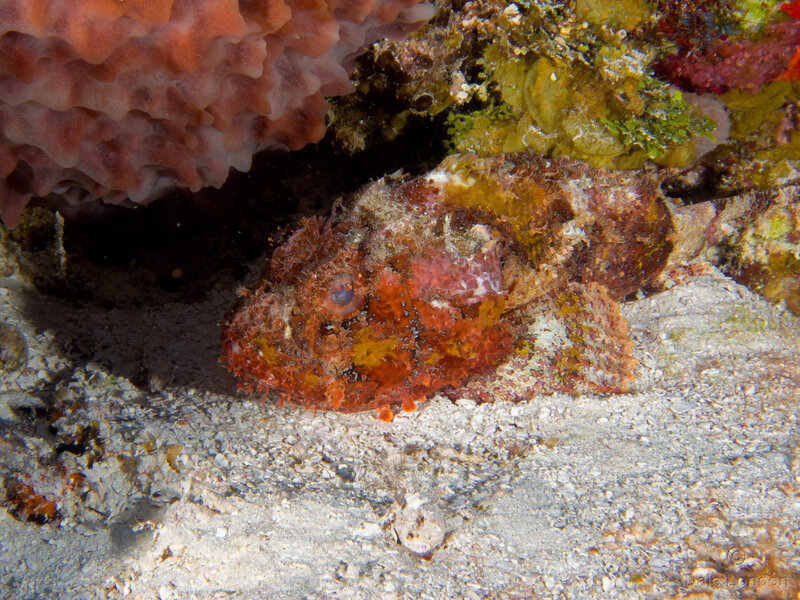 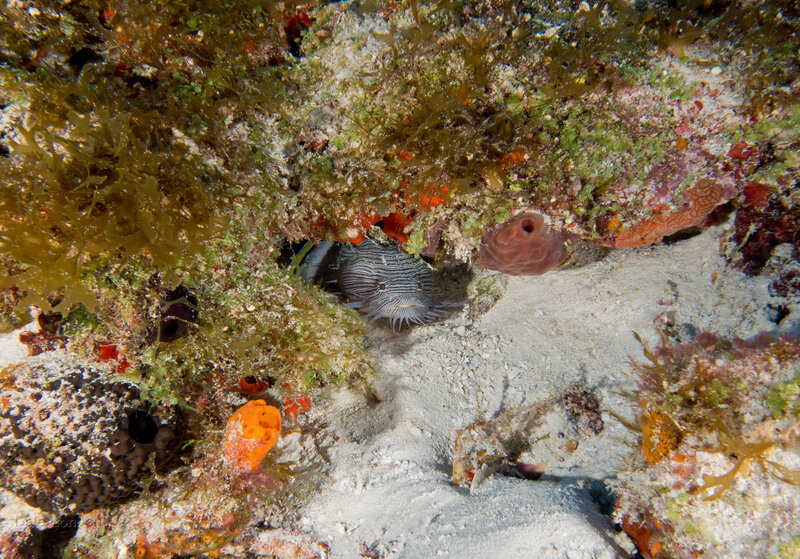 Spotted Eagle Ray. We are starting to see more of them so the season is picking up. 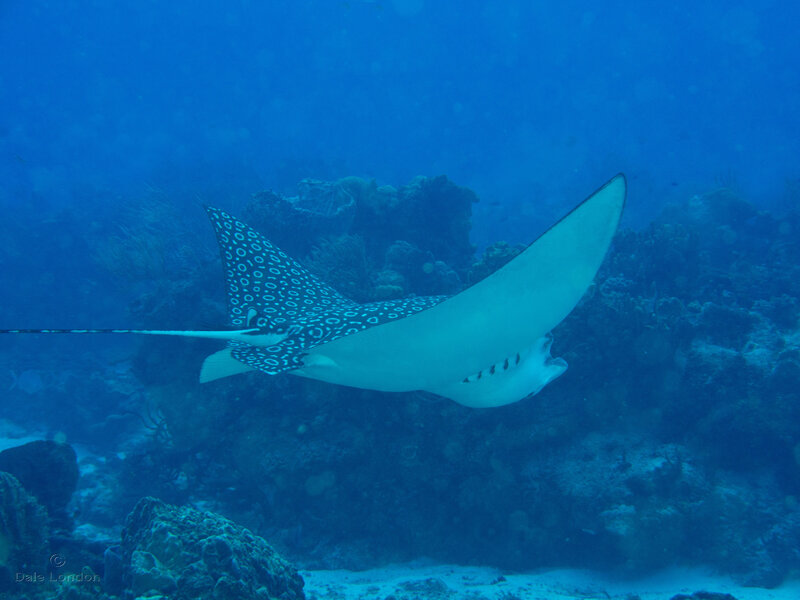 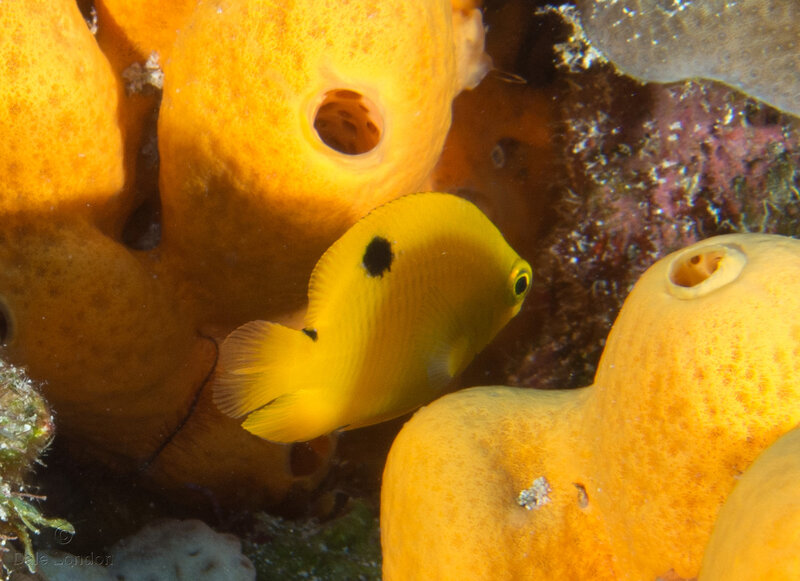 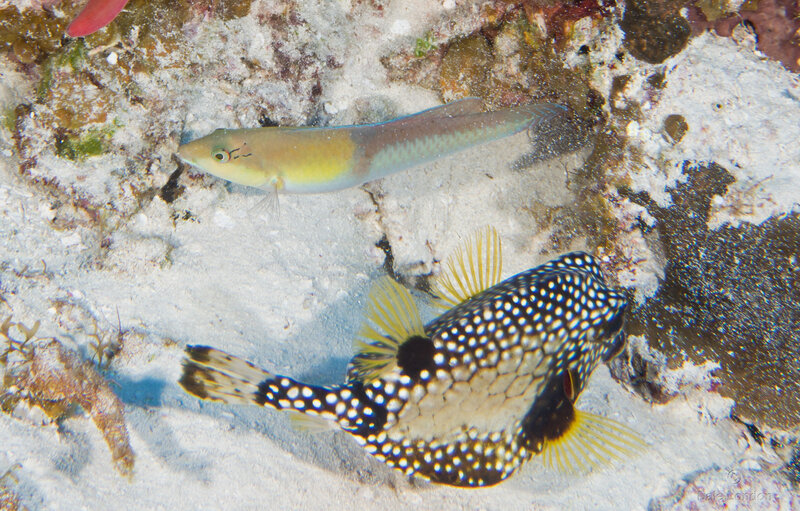 thank you for sharing your photos from the water I miss!
I dive to be in the QUIET world!
I

Great photos, thanks for sharing.

Thanks for sharing. Nice shot of the seahorse.
OP

A few more photos of last days of diving. After the first week I got some sort of cold with a sore throat and didn't dive for 5 days. I've no idea where this came from as no one else I know got it.

The weather was a bit more sunny and the winds died a bit. On Palancar Bricks we had alot of fresh water coming in creating thermoclines and green water. Visibility dropped significantly. All the rain water seems to be coming out.
I did see a black tip reef shark below me but the shark was moving south, was about 130-140 fsw and vis was bad. I gave up going down to get a shot at about 112 fsw. All the reef sharks in singles and schools have been deep and mostly off the walls.
We have seen eagle rays but always singles.

For all dives my computer says 82F. Near the end of Palancar Bricks I think the temp dropped at least 10F but there is no change whatsoever in my log profile for it. I now come to the conclusion that since I have a wrist computer that my arm is always 82F. It did register a couple of 77F's at the surface. Unless I go back to a console computer, I won't be able to say anything about temps.

Visibility was down due to overcast skies, fresh water and still quite a bit of particles in the water. Backscatter was an issue and any long wideangle shots are not worth much even with ambient light unless I was very shallow.

We had one dive on Cedral wall that was just an air burner due to high current and ended up at 53 minutes. I think that was the shortest dive I have had in years. We then did Tunich where at the start the current was slower but picked up the last third of the dive. Many other dives had manageable or slow currents.
Average dive time was 69 minutes with both dive ops. Living Underwater was not currently using their steel 120s but had 95s. I used AL 100s with Bottom Time Divers. All air and I don't use Nitrox. Others used Nitrox for second dives.

Raul, owner/DM for Bottom Time, got quite a few lionfish so he, my wife and friends went to Pez Leon to have them cooked for them. I did not go - trying to get past the cold. They said it was very good.

My Canadian friend left after passing their PCR tests. I recall they said they had their first American Thanksgiving dinner with us on the 25th. We cooked a turkey and all the trimmings. We did however end up with leftover turkey for sandwiches. Good for me.

The Fonatur marina parking is still a pain and they seem to be proceeding with work in the main roundabout instead of along the road. I think parking will continue to be a problem there for quite some time.

Channel Crab in a swimthrough on La Francesa. 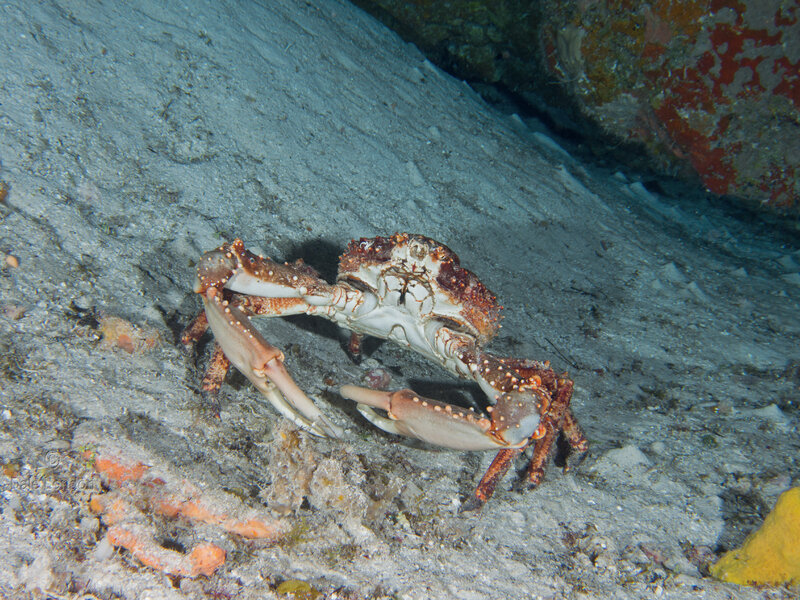 Great Barracuda. This one had a bit of green on him. 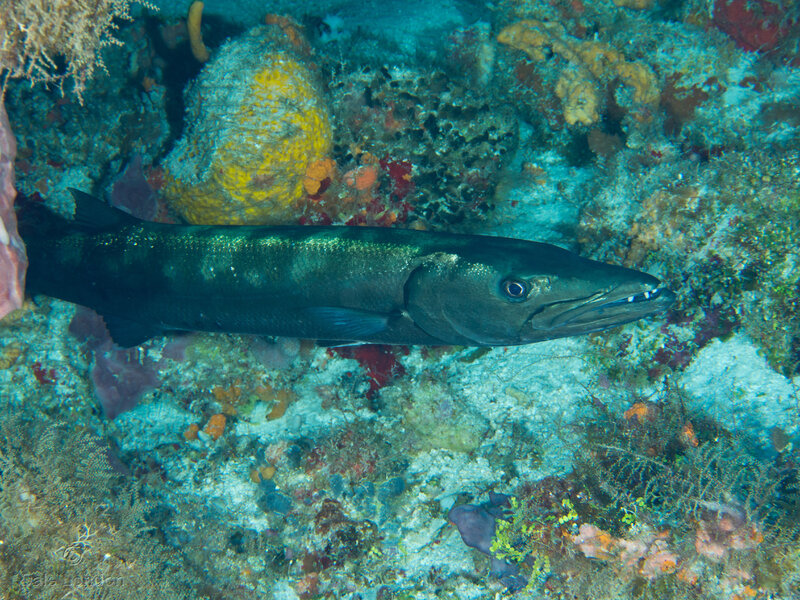 Hawksbill turtle. The bubbles are from the diver next to me trying to get the same shot. 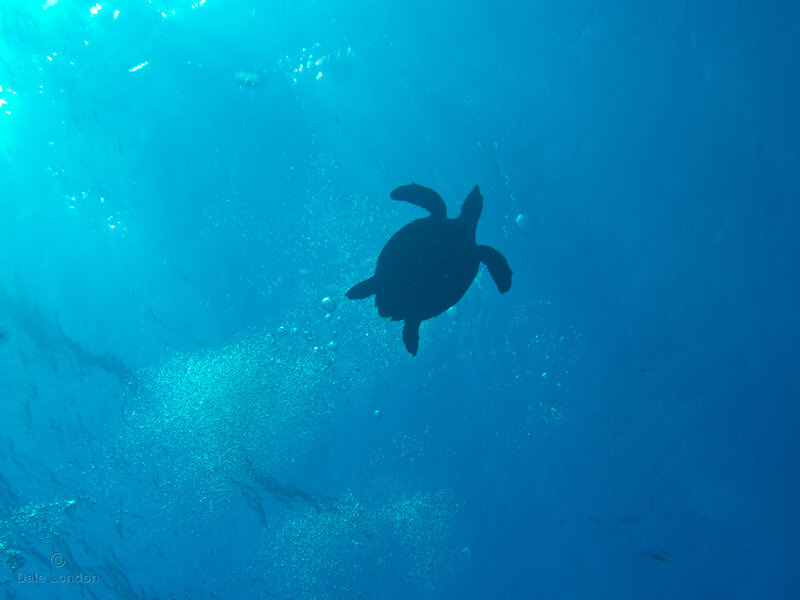 Southern Sennet. I find silvery fish difficult to shoot as the strobes always blow out the closest ones. Editing that only dulls out the whole school. Getting under them for a shot is a chore. 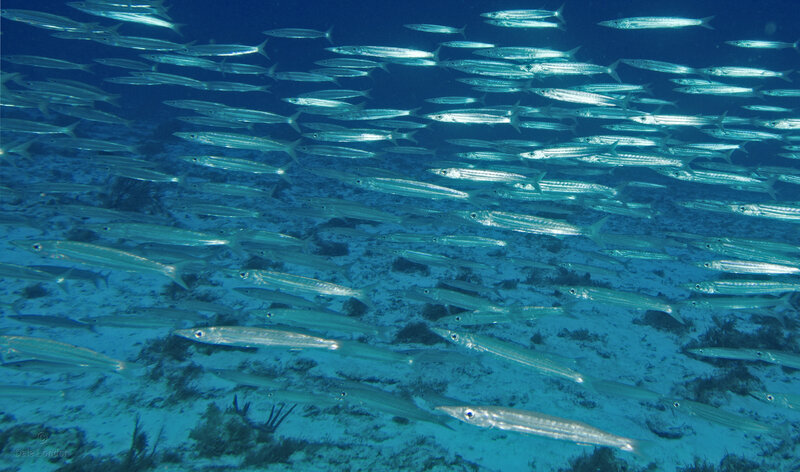 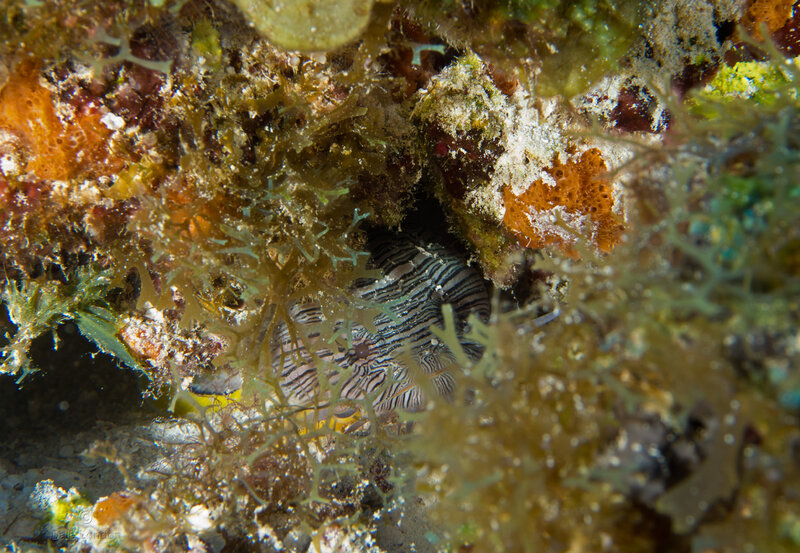 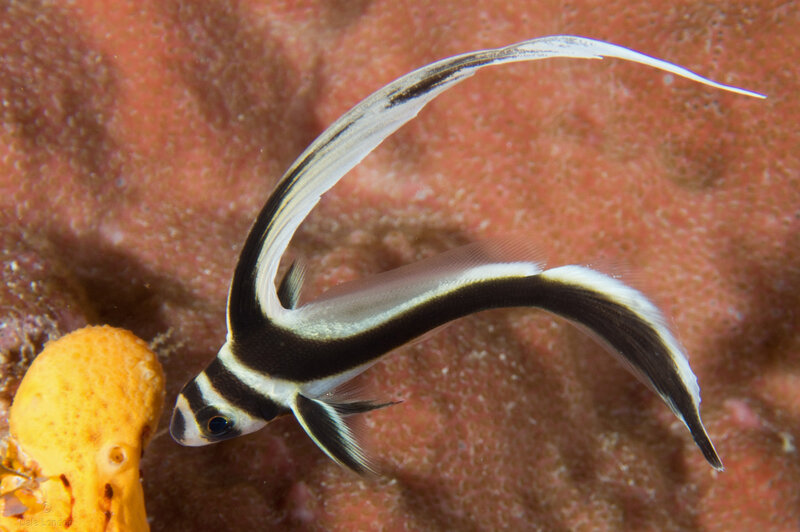 Also, if life doesn't give you water and sugar, your lemonade is gonna be terrible
You must log in or register to reply here.