Just wanted the joint opinion on the rebreather group on following small incident. If the moderators feel it belongs more in the accidents&incidents forum then please move it there. I posted it here because I feel that it's more on topic in the rebreather forum than there.

Case: During a 65m (210ft) dive, working on removing some netting, I started to feel CO2 build up up to a point where it started to feel uncomfortable and I was deliberating on moving on OC.


So we start the dive get to the bottom, set our PPO2 to 1.2 as a team (standard GUE practice) and proceed to scooter to the compass head, and 13mm ammunition we wanted to document. After this was done (about 15' in the dive) we proceeded to the main gun as planned. I removed a cutting knife from my pockets and proceeded in removing nets, then attaching a big SMB to it and inflating it with gas from 1 of the bailout tanks. We release the netting, I put everything back in order and when we are trying to start the shoot of the gun I notice that my breathing rate has increased quite a lot and I'm getting the feeling that I can't get enough air/gas. It was not yet the feeling as in breathing through a straw but it was getting close to this.

I signal my buddy that something is off, to stop him shooting and to give me a moment and come closer. I do a diluent flush and focus on exhaling, ready to bailout if needed. After about 2 minutes of pausing my breathing rate starts to settle down. After about 5 mins I'm able to do a quick breath hold check for 10 secs to see if I'm still retaining too much CO2 but all ok. I signal my buddy that all is ok and we can continue. We shoot some pics, scooter to the shot line and start our long ascend. During the deco I keep focussing to make sure that I don't get another increase in breathing rate. We finish the deco without any incidents and proceeded to debrief.

So my take on this:
- It absolutely was NOT a pleasant feeling for a couple of minutes. You can trust me on that one! It felt like breathing in a plastic bag.
- I have net cleaning/working underwater experience. Quite a lot of it on shallower north sea dives but also deeper. However the deeper "working/cleaning" dives in the past where always on OC, not CCR. However I was focussing too much on the task at hand. Something I clearly train new ghost fishing divers on when they start doing this. My awareness dropped and by the time I realised I was in trouble it was almost too late.
- Signalling something was off to the budy was ok, but I didn't really signal that I had a CO2 problem. He only found out what actually was the problem on the debrief.
- Bailout stress: I didn't have any stress to go to bailout if I needed to. We were just 25' in the dive, I had quite some bailout on me (180b on D8,5L, plus a 50% and O2 stage), plus if need be the tanks from my buddy (who also took a 36m deco gas with him). I've more than enough OC experience that this part was not stressing me at all, and I was (certainly in the beginning) ready to go to OC any minute. However in the beginning I did have the feeling of "it will be fine if I calm down and slow my breathing after the flush it will be ok" which I realised was not a good attitude.
- Scrubber time: This is a thing! The scrubber is CE rated to 200 minutes. I've had already done 130' on it the previous day during a similar dive. So maybe I was cutting it too close on scubber time.

So far I've had good experience doing 2 deep dives on 1 scrubber (up to 75m depth, for a 5h total runtime over 2 dives). There is no additional workload with current because we use scooters but I didn't take into consideration the working part of this dive. Next time I'll renew the scrubber if there is any work/extra activity planned on the dive. I'm not sure it actually was a breakthrough on the scrubber material because after the pause at depth I didn't feel any other CO2 build up during the next 2hours plus of the dive doing deco. As I understand it (but I might be wrong) once scrubber material breakes through CO2 retention capacity of the scrubber really starts to fail rapidly and you end up with higher and higher build up of CO2 in the loop.

So questions to the group. Next to the easy change of starting with a new scrubber on a dive like this and being aware of taskloading/focussing what else could I have done?
Keeping my posts less than my dives

I'd be having a good look at the mushroom valves

Was the setpoint holding accurate PPO2? Probably not relevant but just wondering if you were getting the expected PPO2 since that could make you feel bad if it was too low.

I had a CO2 issue once on my KISS Sport with newly packed scrubber which I later determined was BOV mushrooms not fully seating. Easy solution to switch to BO and abort the dive but not a good feeling and I could tell after just a few minutes during the descent that something was definitely wrong.
OP

Well the PPO2 was set at 1.2 and stayed that way all the way up until we manually started to increase it during more shallow deco (let's say from 21m), so certainly not that.

Flapper valves also not, I did a loop/flapper valve check before the dive (every dive), just like a neg and pos pressure test. Also the flapper (mushroom) valves were replaced by me a couple of months ago so relatively new.
Keeping my posts less than my dives

New parts do not always guarantee good parts. Since they were recently serviced I would carefully inspect them again. More than the usual quick check.

What was the water temp on the dives, that can influence scrubber length? Also keep in mind that the bed depth of the scrubber at 60m is significantly more important than at 21m. I could see a partially cached scrubber breaking through deep while the diver was exerting themselves but then "working" while they were at rest on deco.
Ken Sallot, Dive Gainesville - Dive Gainesville – There is a better way to dive!
SDI/TDI IT#1206, IANTD #2261, NSS-CDS Instructor Examiner #390
Specialties up to and including Tiburon, Meg, Fathom and SF2 CCR's, CCR Cave, Full Cave, Full Trimix and DPV.

On the flapper valve.. What DSV are you using? I've seen people install the valves on the wrong side of the baskets in Golem's (I did it myself), which can cause breakthrough under certain circumstances.
Ken Sallot, Dive Gainesville - Dive Gainesville – There is a better way to dive!
SDI/TDI IT#1206, IANTD #2261, NSS-CDS Instructor Examiner #390
Specialties up to and including Tiburon, Meg, Fathom and SF2 CCR's, CCR Cave, Full Cave, Full Trimix and DPV.

I am an absolute rookie.

Page 43 of the AP xpd manual has a warning on repetitive dives on the same scrubber.

How Does Your Rebreather Scrubber Handle the Deep? | John Clarke Online

This is a link explaining the concept. AP have their own Ansti machine to test these concepts.

My theory would be:

All combined to put the scrubber outside its efficiency window. Once you concentrated on breathing correctly your c02 production dropped and maybe dwell time (time of gas within the scrubber) reduced allowing the c02 to be removed correctly.

I'm using the standard JJ DSV. (no golemgear or other reg). So the simplest of designs. There is no way to install the flapper valves the wrong way in this device, and I have checked the loop (sucking it vacuum 1 side and blowing it up other side). 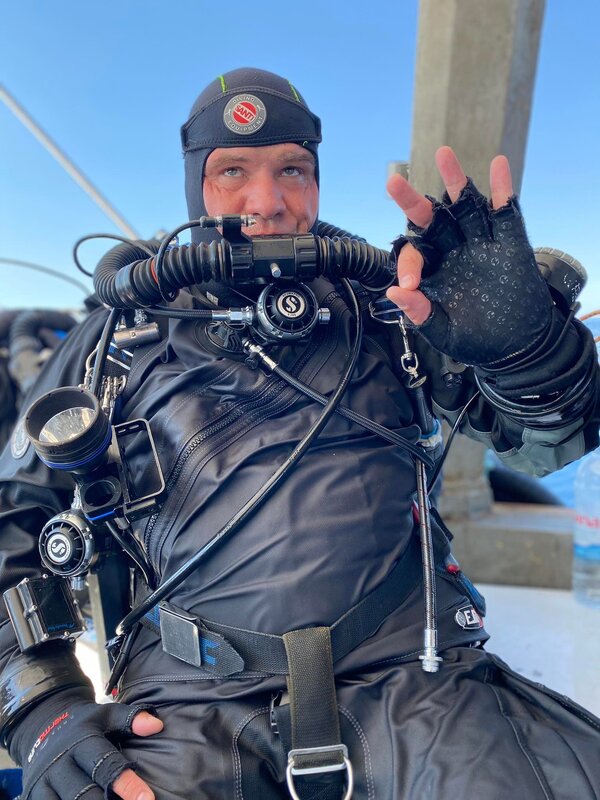 The water temp was 12 degrees at the bottom (65m), with a first thermocline around 40 ish meter ( to 14 degrees), and then steadily going up to 24 degrees at 6m. So big difference in temp depending on depth, but not super cold.
Keeping my posts less than my dives

You see that in all endeavors ... it's human nature, on the day after losing his virginity, for a guy to strut around acting like he invented sex.
... Bob (Grateful Diver)
You must log in or register to reply here.