lowwall:
I had the same experience with the thin wrenches, although the combo 9/16 and 11/16 is nice to have on hand for hose removal.

Tools that you will constantly be working with (other than hose wrenches and a hex key for port plugs) are some wooden dowels that Robert will send you and a couple of brass picks and a plastic pick.

The next most used tools are the vise and vise holders which are simply bars with the ends threaded to fit the HP and LP ports. You screw one of these into the reg port and then you can clamp the tool instead of the reg body. For some operations they let you apply enough leverage that you can skip the vise entirely. Robert ordered a bunch of these for those of us that needed them. When they didn't arrive in time he bought some appropriate sized large bolts, cleaned up the threads and sent them out instead.

After that it's a smallish number of specialty tools that are mostly used for a single operation. Here's a photo of all the tools I used:

The luggage scale was in lieu of a torque ratchet. The three spanners at the top and the white bottle-shaped thing at the right are Mares tools which I got from Aqua Sport Online . Mares won't allow their North American dealers to sell their tools or parts directly, but they are no longer dealers. @Charlene Barker was nice enough to go through her workshop, gather up the Mares tools that were left behind and sell them to me at a reasonable price along with a bunch of Proton service kits. The middle-sized one is for removing the yoke nut, the cutout allows the jaws to reach past the yoke. It also perfectly fit the Scubapro yoke nut, so I didn't have to buy the special driver and ratchet extension for that from Scubatools.

Speaking of Scubatools. You can see their hook spanner and inline adjustment tool on the right. Right below the hook spanner is a 5.5mm hex driver for the nut that holds the lever on Mares and many other European second stages. They also supplied the blue handled double twist o-ring pick on the left and the face spanner which is next to it.

I already had the hex keys and wrenches except the wavy one at bottom center is from Robert. He also supplied the o-ring bullet and the hemostat. He gets used hemostats for free from his side job as an anesthesiologist. (Just to be clear, that's a joke. He actually grabs new ones from the supply cabinet when no one is looking.) I had to buy the $35 circlip pliers from Home Depot at the last minute to remove precisely one clip. The red-handled side cutters next to them were only used to cut off the zip ties on the second stage mouthpieces.

I'm quite proud of the socket on the ratchet at center right. This is for the very thin turret bolt on the Mk 5. The head of the bolt is so thin that it doesn't extend past the chamfers on the end of a socket which means you can't get a grip on it. I bought a cheap thin wall socket of the correct size, stuck it in the vise and hand filed it until the chamfers just disappeared.

These are the tools for my regs. Everyone will obviously have a slightly different set. Also I think there might be a tool or two used for servicing LPI quick connects that is missing from the picture. I decided to skip that part so I could continue working to get my well-stuck diaphragm reg apart.

I just realized there is one tool missing from the picture. There's a couple of operations that require low pressure compressed air. By low pressure, I mean something like 40psi, not the 135psi that comes out of your low pressure ports. If you don't have a compressor, one workaround is a little tool you can hook up to your low pressure inflator. It has a rubber tip that you can bend to release air, the amount you bend it determines the air pressure. I got mine off Amazon, but I'll link to the page on Piranha because they carry it for all three LPI connectors. They call it a BC Air Nozzle. There is also a version with a tire inflator end at the bottom of the page: Tire & Air Inflators Piranha Dive Shop |
Click to expand...

How do you like you US made little vise? bought the same one on Amazon great little vise but I find you cant torque anything with it, pulls off the table.
kevin

Open Ocean Diver:
How do you like you US made little vise? bought the same one on Amazon great little vise but I find you cant torque anything with it, pulls off the table.
Click to expand...

I'd rate it as barely adequate. I have a thick tabletop so was able to crank it down, but it would still twist if I had to put a lot of torque on something. The correct solution, which should bring the rating up to "good enough" is to screw it to the end of the table using these holes: 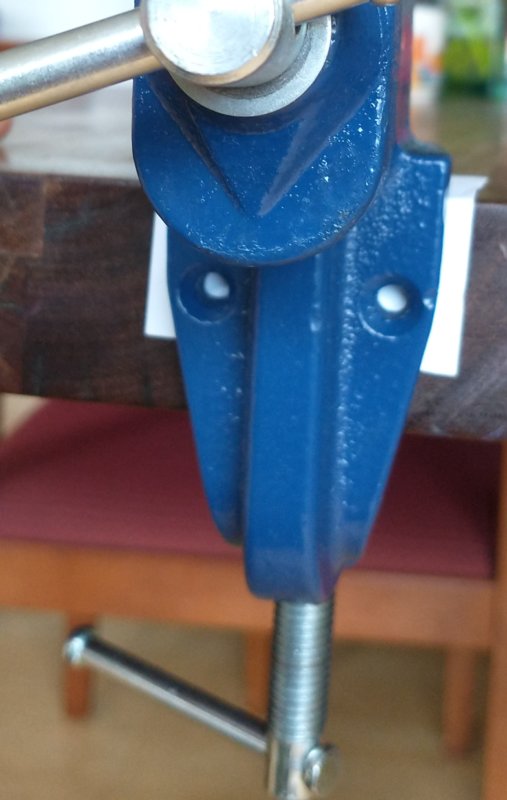 But I was already pushing the patience of my lovely wife.

Now that I know how important it is, I am going to figure out a way to put some holes in the end of the table that I can make disappear when the vise is not in use.
OP

lowwall:
I'd rate it as barely adequate. I have a thick tabletop so was able to crank it down, but it would still twist if I had to put a lot of torque on something. The correct solution, which should bring the rating up to "good enough" is to screw it to the end of the table using these holes:

But I was already pushing the patience of my lovely wife.

Now that I know how important it is, I am going to figure out a way to put some holes in the end of the table that I can make disappear when the vise is not in use.
Click to expand...

My wife’s 2300 miles away so I can get away with a lot, including using the dishes for cleaning scuba equipment, but if a break the coffee table I’m done for. Lol

Think I’m going to return the little vise and buy something like Rob has.
kevin

what is it?
Bob

you can add various jaws as accessories, in the link.
kevin

ah, yes, but again, you still need to make big holes in the coffee table with that one....
Bob

rhwestfall:
ah, yes, but again, you still need to make big holes in the coffee table with that one....
Click to expand...

Yes I have a new lift coffee table so I’m going to drill holes and make plugs to cover them up when not in use. hope she doesn’t mind.
kevin

I bought this $50 4” bench mounted vice from amazon and it is working out very well. I also needed a $30 diamond drill bit to drill mounting holes in my utility rooms quartz counter tops.

You don't need my vise. Too expensive.
Grip Master Vise
The lever action is very fast. So if you have five regs to do, you end up literally saving minutes of repeatedly screwing and unscrewing the vise for various size parts because of the lever.
But this comes at a cost: the lever only clamps over a 3mm distance after sliding the jaws to a near-final position. So if you want to lightly clamp something, you have to estimate the final resting place, and then back off a bit before you clamp, because a partially set lever will pop loose.
Much easier to clamp lightly by adjusting your pressure with a screw clamp vise.
I'm used to it by now, and it was very speedy for the multiple demos during the class. But for the occasional technician it's way too expensive an overkill to save 20 seconds per clamp.
The posts above were correct: any vise will work, as long as you can mount it semi-permanently to your work surface. There are two times when you need to be able to precisely torque at 10 and 24 foot-pounds. That's a lot of twist on your kitchen table.

My advice? Permanently bolt your vise to a larger piece of 3/4" plywood. Like 6" to 1 foot larger. Then C-clamp that temporarily to your kitchen table with some felt pads underneath to keep your spouse happy.

Yep, aside from professional employment, nobody needs that one...

I've been trying to develop a good mounting place for my parrot head vise...
Bob