Before I was bent in October of 2018, I was scheduled to be in a GUE Rebreather course. I didn't have much interest in diving rebreathers, but the instructor needed a buddy for the student, and I took the offer to join class as an opportunity to learn something. I had done a Drager Atlantis 1 course in the late 90's (or thereabouts) and never dove the unit after class. Also did 2 dives on a rEvo with Jason Fisch at the Scuba Connection at Dutch Springs, but that was a demo day type experience.

The day before I was bent, I taught an advanced trimix course. I had one more advanced trimix class to teach before the season ended in the 1,000 Islands and I was never going to dive that deep again. I was thinking about getting into vintage equipment diving to putz around in shallow water playing with Sea Hunt gear.

Now, that I've come back from 2.5 years of hell caused by DCS, I'm trying to figure out if I want to risk SCUBA diving again. I returned to freediving, broke out an old speargun, and tried target shooting with my left eye since my right eye is patched due to nerve damage.

One thought I had was combining the advantages of oxygen from a DCS safety standpoint with the play of vintage gear. I know that oxygen rebreathers have resulted in fatalities related to toxicity due to depth and time violations. In my case, the danger of CNS toxicity would also rein me in from diving deeper than 20.5 feet. When I did underwater habitat training and became an aquanaut, I learned that 20.5 feet was the "magic number" or the maximum depth you should be able to live underwater for days and surface without DCS.

I know that the safe zone for non-combat recreational use is ridiculously shallow at 13 feet with O2 being at a ppO2 of 1.4 at that depth.

I was wondering if there are any vintage oxygen rebreather divers just (not) blowing bubbles to swim around places like the spring run at Ginnie, staying above thermoclines in lakes at 10 feet, and that kind of thing?
"Through all of my seasons and all of the reasons, I've stayed on this circuit for me." - Chris Ledoux

Did you ever run into Gregg Stanton up there in cave country? He's been diving since dinosaurs roamed the earth, but tends to keep a relatively low profile online. Equipped with extensive diving knowledge and numerous rebreathers, plus the patience of a saint, as per my time completing my OW with him. I believe he's now dividing his time between cave country and Hawaii these days, but worth an email anyway perhaps.
“You can lead a horticulture, but you can’t make her think.” ~ Dorothy Parker

Your life is an occasion. Rise to it! ~ from Mr. Magorium's Wonder Emporium

Trace Malinowski:
I was thinking about getting into vintage equipment diving to putz around in shallow water playing with Sea Hunt gear.
Click to expand...

Have you considered shallow diving in Sea Hunt gear using high FO2 nitrox? Would this decrease your DCS risk enough for you to comfortably resume diving?

A little off topic, but have you done a full write up on your hit? You know with the normal questions like PFO, profile, previous dive day, progression of symptoms, ect, ect...

As a tech instructor i think you might have insight that other reports might leave out. I'd be interested to read the accident/treatment/recovery report from your point of view.

I fully understand if you don't want to relive the incident but if you did i think you have a unique situation that presents learning opportunities for others. Being able to explain the event as an instructor would be a little different than just another "I got bent" report.

Safe diving. I hope you find what you're looking for. The vintage stuff is fun and addictive. I have 2 doublehose regulator already.

Here's one I built earlier, in the laundry I use it heaps pure o2 to stretch the airways

There's heaps of info and people out there 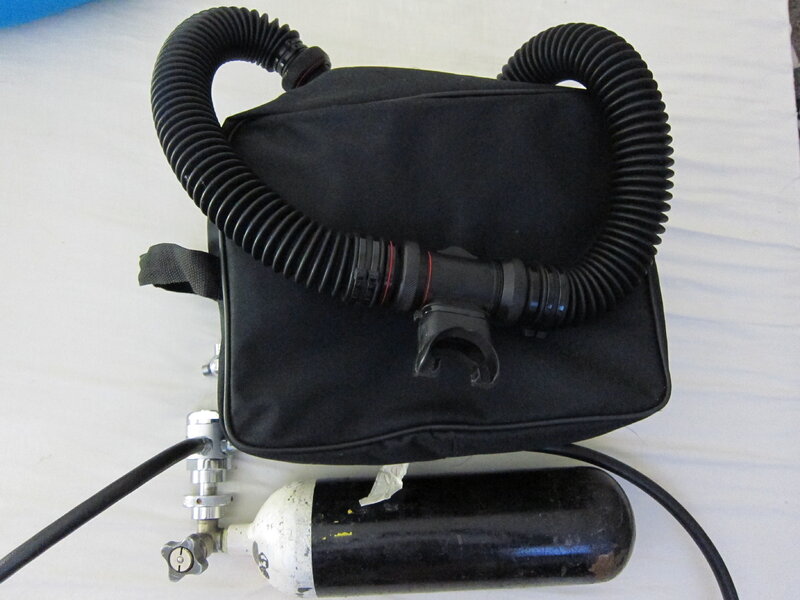 This thing has Draeger mine escape apparatus bits, a Mares reg, and the sack is a wine cooler

Magnificent!
20,000 leagues under the sea diving to adventure
in a silent world with my ceiling the waves....Emile

Your given right is to not interfere with other peoples rights
So do whatever you want, but move to your own island first....Emile again

Now real antique is old, maybe cracked rubber on the important bits, and they taste of stink 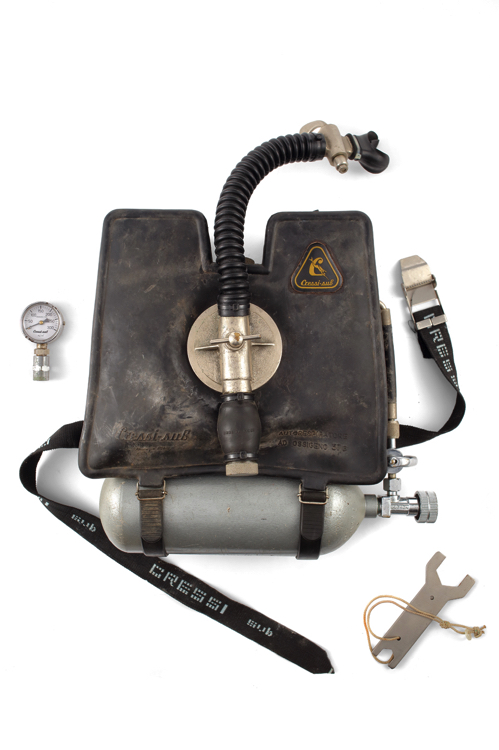 
and not enough gas transfer through only one pipe and do you really want to modify one
20,000 leagues under the sea diving to adventure
in a silent world with my ceiling the waves....Emile

Your given right is to not interfere with other peoples rights
So do whatever you want, but move to your own island first....Emile again
R

happy-diver:
This thing has Draeger mine escape apparatus bits, a Mares reg, and the sack is a wine cooler
Click to expand...

A wine cooler?
You have a link for what you used?
Looks like a very nice size,

I really like diving pure pure Oxygen rebreathers. I don't have it anymore but I built a simple pressure-activated valve that slowly added air to a wing-BC through a venturi. I set it to activate at 20'. I am thinking of building another one.

For other readers, the advantages are:
The very real risks are Oxygen Toxicity, which is largely mitigated by the auto-inflate sensor, and water intrusion in the absorbent.
Click Here: ScubaBoard needs your help...​

Rebreather people are convinced they are a species unto man, whether they know it or not
With enough money you can be “TRAINED” to the other end of the spectrum about how to
handle issues, not educated to avoid them, as they really don't know squat about their gear

And then there's diving

Diving with just another bit of gear


The only time is the present Mr Akimbo!
20,000 leagues under the sea diving to adventure
in a silent world with my ceiling the waves....Emile

Your given right is to not interfere with other peoples rights
So do whatever you want, but move to your own island first....Emile again
R

I pick up 2 of these, I have no idea who made them, did not have hoses that's my design,
If anyone recognizes these I would love more info on the history, these seem to well made to be homemade, 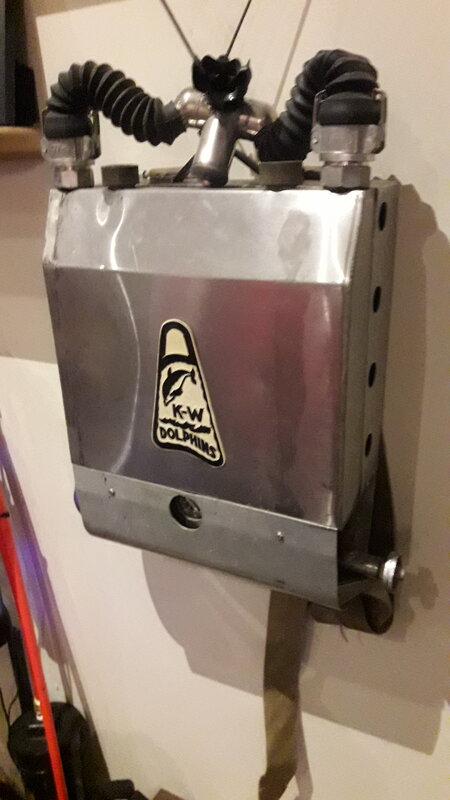 This is a old homemade one with plywood and some aluminum. 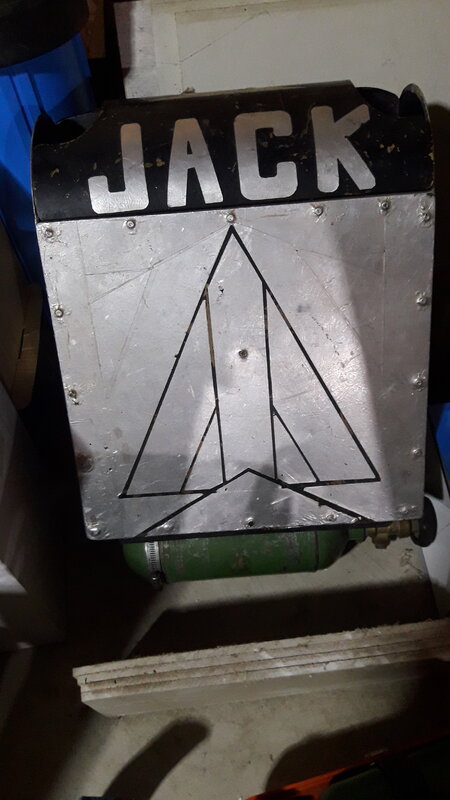 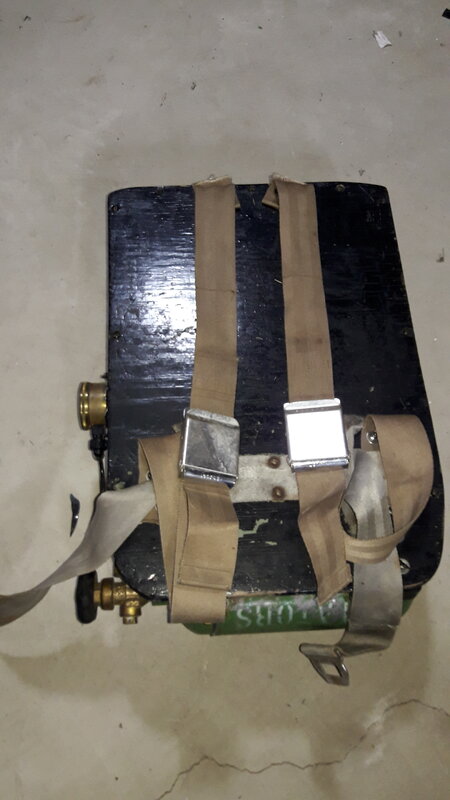