FABULOUS DAY AT THE UNDERWATER PARK - Admittedly when we got there, even though it was sunny and warm, it was rather surgy at the surface (fortunately it didn't go more than a foot or two deep so was not an issue underwater at all) and you wouldn't have predicted what a great day it was going to be based on that. (In fact, Anthony Nex says it was the three best dives he's ever done.) Our goal was to encounter some of the Black Sea Bass (aka Giant Sea Bass) that have been hanging out at the Park throughout the summer. But they can be elusive creatures, and they can spook if you're not careful, so sometimes all you get is a fleeting glance instead of a great photo opportunity. You never know. The water temp was 67-71º on my gauge, so definitely pleasant as we set out on our first of three dives. Visibility was around 50 feet, with some particulate in the water. We went out and right, to the area known as The Pinnacles. (It's also where the Cousteau plaque, which as REALLY worn down, is located.) We didn't encounter any BSBs at first. But we were very delighted to see how thick the kelp has grown back in the Park. Really healthy. And there were many clumps of Blacksmith clamoring to get cleaned by female Senoritas all over the place. There was also a lot of Garibaldi, and including some almost-adults who were 99% orange but who retained a rim of iridescent blue around their body from their juvy days. We even spotted an abalone on the first dive. Plus . . . we got a BSB, but only a fleeting glance. Betsy Suttle spotted him out in the blue but he must have been late for a meeting because he was moving pretty good. But it was still a really good dive. 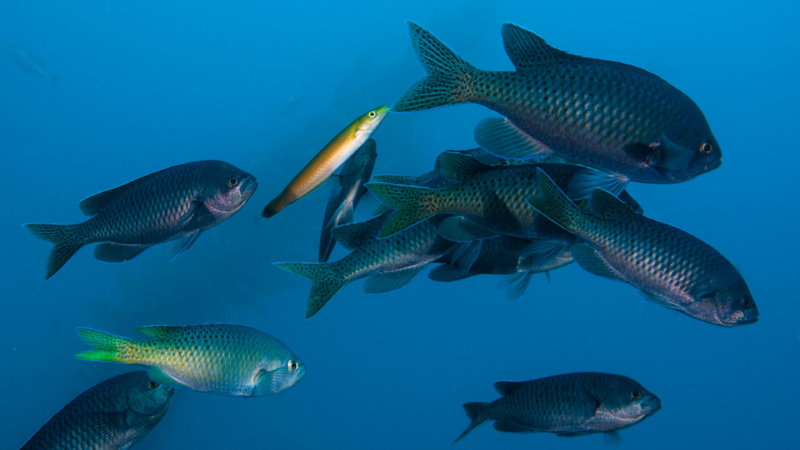 DIVE #2 - For our second dive, we figured we'd go out and to the left. As we started out and I was trying to find a path for our small group through the kelp, Betsy was frantically gesturing to me as I basically was swimming right by a BSB who was just hanging amongst the kelp no more than 30 feet deep. It still amazes me how well-camouflaged they are when they're in kelp. (Or I'm not nearly as observant as I think I am.) We didn't get a lot of time with him but I managed to fire off a few frames, as did Anthony Nex. And we saw a lot more good stuff on this dive too: a Bat Ray, Scorpionfish, two octopi, and a cluster of California Sea Hares doing what they do when they cluster together. We also had another BSB encounter as I was pointing out the Scorpionfish to Anthony and as I turned around, not one but FOUR Black Sea Bass, all in a straight line, were swimming on their merry way, apparently also off to another meeting that they were late for because they weren't stopping. But again, a really pleasant dive. And at the end of our safety stop, Ruth Harris of Catalina Divers Supply was snorkeling with a group of autistic kids and feeding the fish, so that provided some good photo ops (as you'll see in the SmugMug slideshow as well as below). 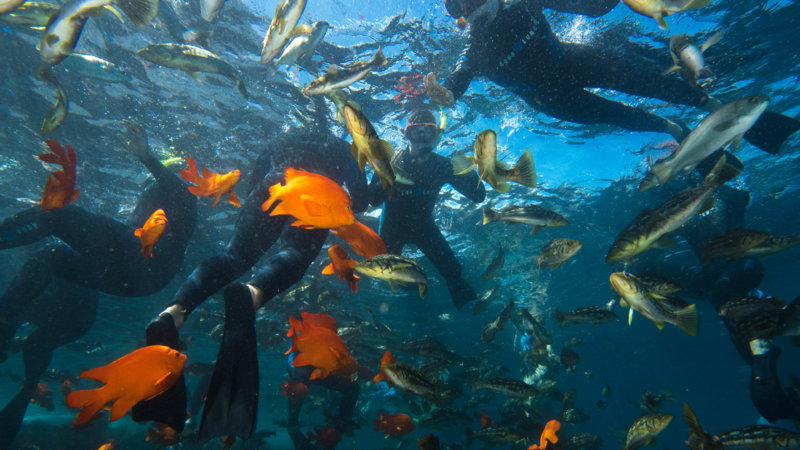 DIVE #3 (THIS IS WHERE IT GOT GOOD) - Our thinking process was that we sort of saw them to the right and we sort of saw them to the left, so maybe what we should go is go half right and then double back and go half left, basically covering the middle third of the Park, to see what's what. We started out rather routinely to the right (Pinnacles), seeing the usual suspects, and then made our way back through the middle area. And that's when the magic hit. In the middle of some kelp, about 65 feet deep and in the middle of the Park, I spotted a Black Sea Bass. Wait, there were two. Nope three. Oh my, four!!! Best of all, looking at the time stamps from my first shot to my last, we spent a little over 16 minutes with this quartet. The key was that when we spotted them, we simply stopped and settled down. As they grew accustomed to us, we could then slowly move in closer. And after a while (as you'll see from some of the pix), it was a question of who was watching whom? They circle out and then circle back. And when we were joined by two other divers, they're check them out, then come back to us, check the others out again, and repeat. It was quite special encounter and served as a phenomenal cap to what was already a really great diving day. 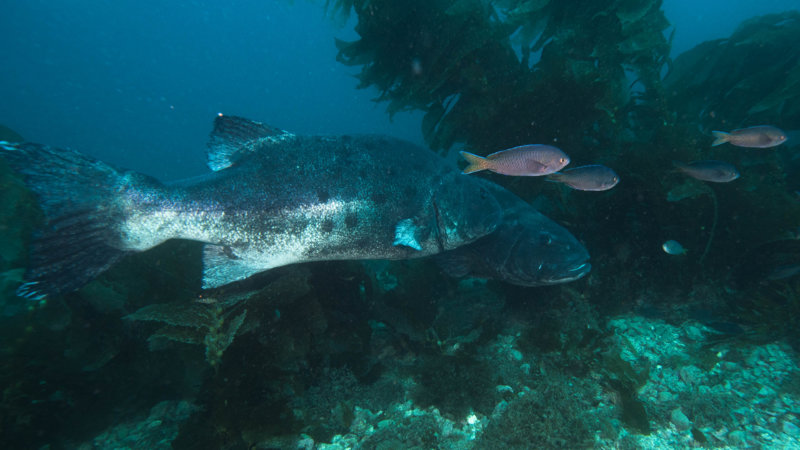 YES, THERE ARE MORE PICTURES THAN THESE - There are 33, to be exact, all on my SmugMug page. Many BSBs, but also some of the other critters we encountered, including a shot of a male California Sheephead staring straight into my camera (and perhaps my soul) that is my favorite of the day. You can see all the photos as a collage, or click on them individually, or scroll through, with this link: AVALON UNDERWATER PARK (9-23-17) - kenkurtis.

TIRED SEA LION - Following our second dive, we also saw something I've never seen at the Park before: An adult female sea lion had hauled out and was resting/sunning herself on the rocks right by all of the divers. After about an hour or so of that (people were very good about keeping a respectful distance), she slipped back in the water, meandered through some of the people on the surface, took a peek at the base of the stairs, and then went on her merry way. (There's a pix of her out of the water on the SmugMug page.)

GOING BACK TO AVALON OCTOBER 28 - If you're now kicking yourself and saying "I should have gone" all is not lost. We're going back again on Saturday, October 28. I have no idea if we'll have the same luck, but I can pretty much guarantee you that you won't have a BSB encounter sitting at home watching college football. If you want to join us in October, e-mail me here or call 310/652-4990 to get signed up.

FISH ID THIS THRUSDAY - In case you don't know how to tell the difference between a Black Sea Bass and a Blacksmith, perhaps our fish ID class is just the thing you've been looking for. We're having the next one this Thursday evening in Westwood, it's quite informal, and is a general system for how to identify fish, with special applications to California, the Caribbean, and the Pacific. It's very informal, usually runs 2-3 hours depending on how much back-and-forth there is, and is (hopefully) as much fun to take as it is to teach. We'll likely start around 7:30PM so if you're interested, email here or call us at 310/652-4990 to get signed up. It'll be the best $25 you've ever invested in your diving education.

LOBSTERS THIS SATURDAY - Again a reminder that lobster season starts this Saturday, but at 6:00AM, not at 12:01AM. The later pre-dawn start time is new this year and I'm sure wardens will be keeping a sharp eye out for those who didn't get the message. On top of that, dive safely. We have the Catalina Hyperbaric Chamber on heightened alert throughout the weekend because sometimes people get so enamored with chasing lobsters they forget basic diving safety rules (like air supply) and get into trouble. Don't let that be you. We'd rather have the Chamber Crew bored to tears over the weekend than be exhausted from multiple treatments. Dive smart, and dive safely. No lobster is worth your life.

MARIA UPDATE - The hurricane caused major damage throughout areas of the Caribbean (especially Puerto Rico, which took a direct hit, as did Dominica) but now appears to be on a path to miss the East Coast, miss Bermuda, and will take a sharp eastward turn in a few days and peter out. However, it will be generating a lot of storm surge, especially around North Carolina and the Outer Banks. Here's the latest forecast map: 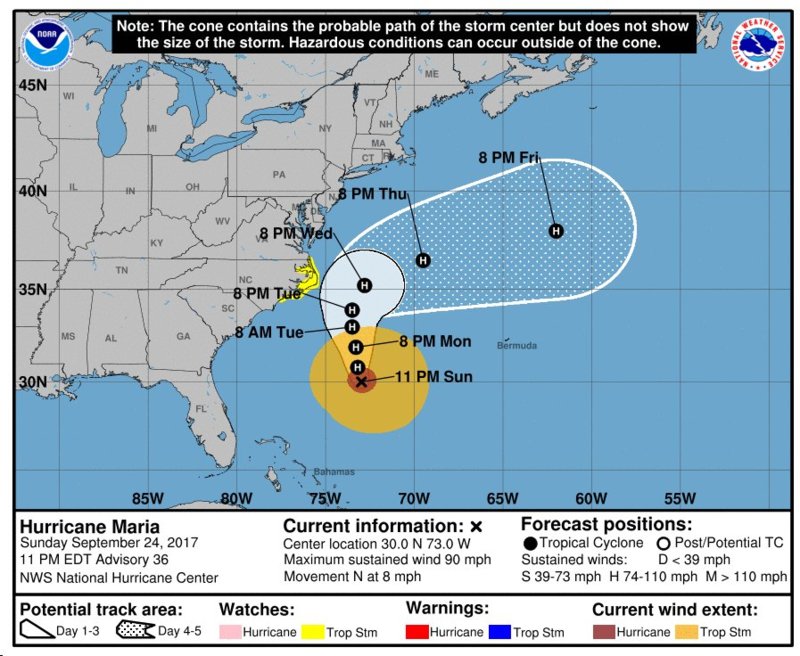