Wouldn't it be nice if there was a way to divert the rain plaguing the east coast to the west coast . . .

MASK UP!!! - This past weekend the L..A County mandate for masks at outside events of over 10,000 people went into effect. This is just a quick reminder that the mask requirements still hold for forms of public transportation and mass transit as well. As it specifically applies to diving, this includes the Catalina Express and the taxis that take you to the Underwater Park. Dive boats are still included as well since they also fall into this public conveyance category. (Whether captains and chartermasters observe or enforce this is a separate topic.) Mask are making a difference. L.A. County today (Sunday) reported 2,781 new cases, down from 4,000/day a week or so ago. But it's nowhere near the less than 200/day we had in May and June. Vaccines work. Masks works. You may not like wearing a mask, but it's not nearly as bad as wearing a ventilator.

THE NEW FACE OF GOING OUT IN L.A. - My sister and I went to the Dodger game Sunday and I was all dolled up with my hat & shirt, my face-covering, sunglasses, and a cloth pinned under my hat to protect my neck and ears from getting sunburned (since we sit in an area that gets direct sun from behind us). Quite a fashionista, yes???? (Photo credit to Susan J. Ollweiler, who complained mightily last week when I omitted such recognition.) 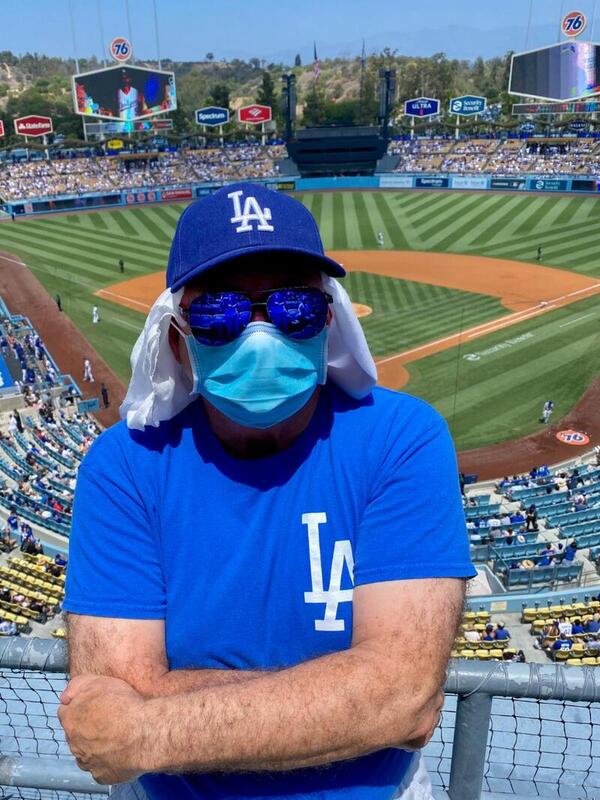 AVALON REPORT - We took a small group over last Monday and had a lovely time. Water temp was around 69-70º at depth, viz varied from maybe 50 to 60 feet and was fairly blue, and there wasn't a lot of surge or current at depth, but there were some occasional rouge breakers on the steps for entry/exit so you just had to watch timing a bit. LOTS of snorkelers too as the local shops are offering snorkeling tours and it just seems to be becoming a more and more popular snorkeling spot. That means sometimes there's congestion on the stairs or in the water right in front of the stairs since a lot of these folks are not avid snorkelers so don't want to venture too far from the safety/security of the stairs. We had a really nice extended Giant Sea Bass encounter and also ran into a fairly large (and tightly-packed) school of Sargo. I saw a number of abalone as well which is also a good sign. The kelp has massively come back although the raised water temp has start to impact the health of said kelp. We always talk about how fall is really peak diving time in SoCal so, at least as far as the Park is concerned, we're starting to set up nicely for what could be a spectacular fall diving season.

SEXUALLY CONFUSED SEA SNAKES - Laurie Clauss sent along an interesting article about male sea snakes trying to "mate" with divers, specifically with their fins. Now how on earth you would mistake a scuba fin for a voluptuous female sea snake is beyond me, but apparently this is happening with some regularity. There does not seem to be any danger to divers as the snakes are not "attacking" divers, but by the same token, I can certainly understand that it could be unnerving to realize that one of the most venomous creatures in the world thinks you should be the object of their affection. You can read more about this here: SEX & THE SINGLE SEA SNAKE.

BONAIRE ADJUSTS ENTRY RULES - Many of you may be considering a trip to Bonaire as it's one of the more popular dive spots that are fully open. Be aware they've altered their entry requirements, according to InfoBonaire: " . . . PCR tests for travelers to Bonaire must be completed within 48 hours before departure. [Note: Previously the time span was 72 hours.] The unvaccinated and those not fully vaccinated from high-risk countries must take an antigen test immediately upon arrival." It's a good site for info but a lot of it is promotional. For the latest actual news, look under the "News & Events" tab and then "Tourism Info": INFO BONAIRE.

CLEVER DOLPHINS - NewScientist has an article about how dolphins in the Caribbean have been spotted creating "mud circles" as a means of catching fish. It's similar in concept to whales blowing bubble rings to trap fish and is a great example of a learned behavior. There's a nice drone video of the dolphins that shows this quite clearly as well as an article explaining it more fully: MUD-RING DOLPHINS.

And that'll do it for now. Hope you have a great week, and let's go diving soon!!!