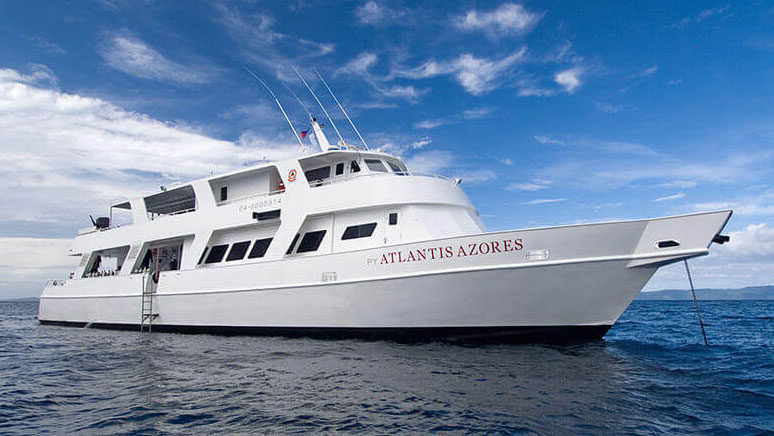 Tubbataha is located in the Sulu Sea, at the center of the Coral Triangle between Indonesia, Malaysia and the Philippines. Rarely visited due to its location and its status as a marine preserve and UNESCO world heritage site, Tubbataha is made up of two reefs, simply referred to as the North and South Reefs. The North and South Reefs both enclose a sandy lagoon. On the southern tip is an islet with a lighthouse. This is used as a rookery for birds and is frequented by turtles.

Tubbataha Reefs Natural Park is home to no less than 573 species of fish, 373 species of corals, 11 species of sharks, 12 species of dolphins and whales, nestling hawksbill and green sea turtles. It is one of the most reliable places to photograph large schools of fish, larger pelagics, sharks and mantas in clear, blue offshore waters.

Charters are only available in two late spring months a year due to weather and sea conditions, as it is an offshore area. Our charter in May is at a prime time! Atlantis Azores is a comfortable 107' long, 16 passenger vessel. Most diving is out of two RIBs. All staterooms have climate-controlled air conditioning, hairdryer, shower gel and ensuite facilities. 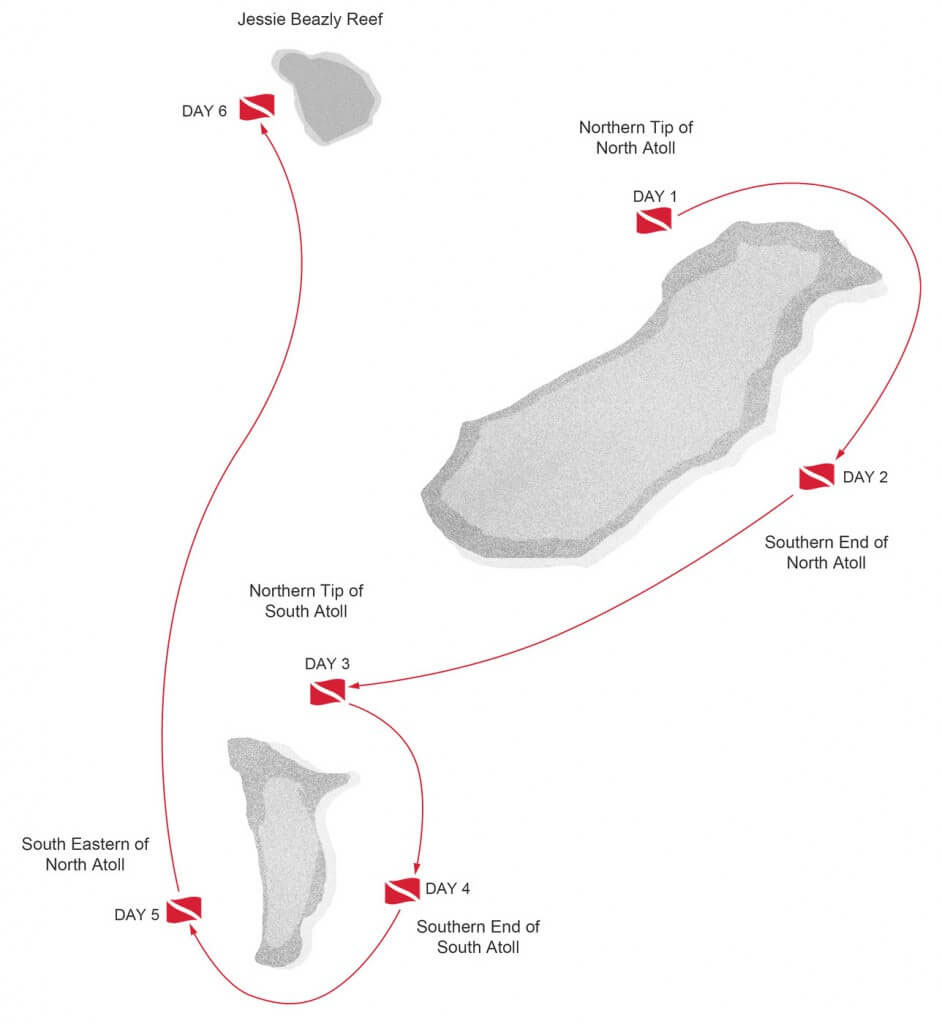 Northern Tip of North Atoll
Fissures and crevices lead into it where nurse and whitetip reef sharks can be found resting during the day. Small manta rays, stingrays and spotted eagle rays, together with numerous turtles have all been spotted. The wall has huge gorgonian fan corals, soft corals and barrel sponges. Blacktip, whitetip and grey reef sharks can normally be seen patrolling here in numbers.

Southern End of North Atoll
Malayan, Wallstreet and Amos Rock are the pick of the dive sites. Fans and macro will enjoy these sites with Denise pygmy seahorses clinging to the sea fans. See scorpion fish, moray eels and even ghost pipefish. Don’t worry pelagic fans, you can still see huge dogtooth tuna, sharks and spanish mackerel in the blue.

Northern Tip of South Atoll
Highlights include Black Rock, T Wreck and Eiger Wall. You will lose count of the number of green and hawksbill turtles in the area. Look out for marble stingrays in the sand. Eagle rays often cruise by and expect to see large grouper and giant trevally.

Southern End of South Atoll
This area is known for its lighthouse and is home to famous divesites Delsan Wreck and Black Rock. Hammerheads are the most prized sighting here as well as occasional whale sharks passing by. Look out for guitar sharks in the shallows.

Jessie Beazley Reef
The charter finishes with a couple of dives at Jessie Beazley Reef. You can see schools of bumphead parrotfish munching on the corals. Watch out for inquisitive napoleon wrasse. The shallow reefs are full of colorful tropical fish like the regal angelfish and titan triggerfish.

Southern End of North Atoll
The dive starts on a gentle slope that is covered in superb unmolested corals and ends with a wall covered with dramatic gorgonian fans where sharp eyed divers can often spot pygmy seahorses. If there’s current, you’ll come across a wide variety of large fish, including narrow-barred spanish mackerel, giant trevally, red snapper, napoleon wrasse and giant groupers.
You’re almost certain to see whitetip and grey reef sharks. Look out for manta rays, spotted eagle rays and both green and hawksbill turtles closer to the surface. Other fish that can be seen include rainbow runners, african pompano, angel fish, leaf scorpion fish, fire dart fish and down deeper, decorated dart fish.

Guests fly internationally into Manila (MNL) then board a domestic flight (approximately 1-¼ hours) to Puerto Princesa (PPR), which is located on the island of Palawan. Guests board the Atlantis Azores Saturdays at 5pm. They cast off from the port around 7pm for the 10-hour journey to Tubbataha where we arrive the next morning in time to start diving.

Deposits are $1000 per person. Note: New booking deposits are refundable until the Philippines re-opens, then they are non-refundable.

We also have an optional pre-trip resort-based add-on May 23-28th at Atlantis Dumaguette Resort, for incredible macro diving. Includes RT transfers from Manilla, 4 days/5 nights lodging in twin share rooms, meals, 4 days of 5 tank boat dives, one trip to Apo island. Does not include Park Fees, nitrox, etc. Cost is $1758.

The Philippines opens Feb 10th to fully vaccinated tourists including from the US!

The trip is on and we have spaces available!

This should be in the livaboard section.
www.saccityscuba.com
PADI 5-Star Dive Center
Sacramento's only PADI Dive Center.

JackConnick:
Its land based as well.
Click to expand...

My bad. Should have read it closer.
Sacramento's only PADI dive center.

Not sure if I missed it but there is no information on cost and pricing of the LB trip here or on the booking site. all I get is a booking page for the land based resorts. How does one get even a tentative feel for affordability or contemplate the temptation when a search on pricing draws a blank?

Q - is the price of $1750/- for the pre-trip? Or the LB trip? The paragraph starts with mentioning a pre-trip experience so it’s confusing.
Instagram: @tinkoo_dash for Diving videos...
OP

Sorry for the confusion. If you go to the signup page link on my site all the pricing info is available.

Deposits are $2250 per person and are non-refundable, but transferable to another person.

We also have an optional pre-trip resort-based add-on May 23-28th at Atlantis Dumaguette Resort, for incredible macro diving. Includes RT transfers from Manilla, 4 days/5 nights lodging in twin share rooms, meals, 4 days of 5 tank boat dives, one trip to Apo island. Does not include Park Fees, nitrox, etc. Cost is $1758.

Sorry for the confusion.

At least I dreamed for a few minutes… thank you for that!