It was a tongue-in-cheek comment...aka a joke. The tec instructors I have worked with...most rave about the Poseidon regs...and I agree considering their proven performance record. The comment I made was directly as a comment about how R Singler had an old Poseidon 1st stage that had excellent performance. Anyway, thanks for the extra info!

Bigbella:
That many of those decades-old regulators are still being used, not relegated to paperweights as so many brands have, is simply a testament to their quality and longevity, not a reflection on their newer equipment.

I have owned and / or serviced every single-hose model, dating from the 1960s-on; and advancements have certainly been made, since -- including their more recent closed-circuit equipment. I wouldn't think twice about diving on any of their regulators, made since the moon-landing; or, one manufactured in the last year.

There is over a forty year difference between the first stages, below. Neither, new or old, have ever missed a beat -- whether under ice in the Northeast; or under the worker's paradise that is Oakland Harbor . .
Click to expand...

For those that missed it, I've posted a recording of our little get-together to my YouTube channel.

Muchos gracias for the recording, had to leave a little early, and for putting it together in the first place, good content and will definitely watch whatever you have planned next!

Thanks for posting the video. Enjoyed it a lot. Work interfered with me watching it in real time.

You referenced a link in the chat window to something about Aqualung but I couldn't see what it was. Can you post the link here?

Suggestions for the future:

Pilot and other unusual second stages like the Scubapro Pilot, Oceanic Omega II and Hollis 500SE, Poseidon second stages, and the Tekna 2100 series.

I pointed the attendees to this classic Scubapro bickerfest!
Thread Has anyone tried ScubaPro's MK 19?

A great discussion of the then-new original Mk19.
And another star performance by @DA Aquamaster !
OP

After some pointed questioning from @couv about my observed instability of both the Mk25 and Mk19EVO during the IP shift test from full to empty tank, I retested them on camera and have posted the videos here:
Mk25: Mk19EVO: Bottom line?
Only 2psi shift for the Mk19EVO from full to empty tank, and 0-1psi shift for the Mk25 from empty to full tank!!!
Once again, credit to Scubapro's engineers. The evidence is right there! I was overly critical during the seminar.

I suppose a Scubapro mod. 109.
Ma favourite reg even today. In my family we use 7 109 and one 156 (balanced adjustable, which is the very same reg).
Of course all our 109 were updated to BA, too.
Well, actually one of them is a 129 (hose on the left side).
Regarding the exhaust valve, the one in the 109 is a bit smaller than more modern second stages (G250, G260), resulting in a breathing cycle which, on average, requires a slightly larger positive pressure during exhalation than the small negative pressure during inspiration.
Such asymmetric pressure cycle can be perceived as fatiguing by divers used to modern regs. People used to it, instead, love this asymmetry, which stimulates a more proper way of breathing, with very long and profound exhalations, slightly faster inspiration and a small pause with full lungs (keeping the glottis open, so it is not "hold breathing").
When using modern regs, I, and many old-style divers, tend to breath shorter and faster, with increased air consumption and risk of CO2 accumulation.
So, a characteristics which someone perceives as a defect, is actually appreciated by a number of divers, who even today search and use these old Scubapro 109-129-156.
Angelo Farina, PhD
FIPSAS/CMAS Instructor (3 stars)
Marine scientist (underwater acoustics)
Full Professor of Applied Physics at the University of Parma, ITALY
Angelo Farina's Home Page

The Mark 25 Evo is an incredible first stage and that Scubapro was so nearly able to duplicate not only the looks but the performance with a diaphragm regulator in the Mark 19 Evo is impressive. 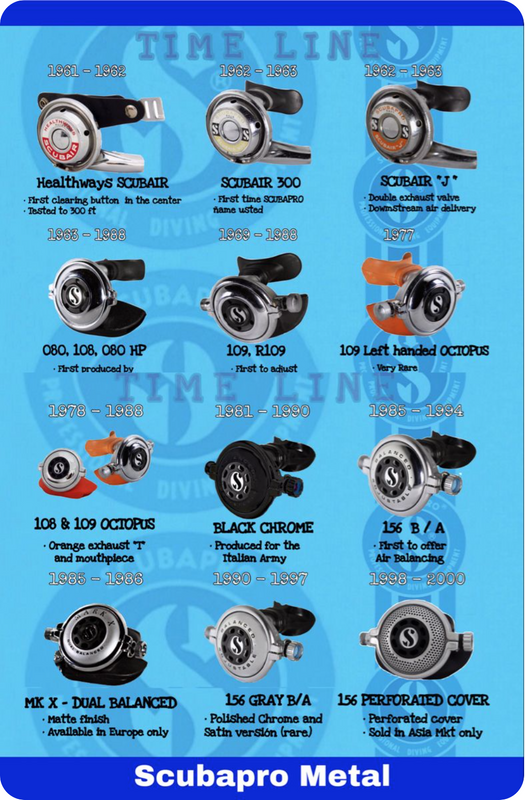 New diver or old diver there is no way to make an exhausting exhaust effort into a positive benefit of higher WOB. The small exhaust valve and restrictive exhaust tee (of the 109/156 series) are the culprit. As was discussed during the Zoom Video engineers of nearly all the main players have brought the inhalation work down to the point where further imrrovement is tiny, tiny incrementalsim. Not so with the work of exhaust. There is room for improvement in exhaust WOB though some modern second stages (including the double hose Kraken regulators) are very near the point of incrementalism now. The very few last of the run 156 second stages did have a full size exhaust valve inserted into the same manifold and using the same tee. I have only seen a few and those are noticeably better than the small valve versions but they are not a G260 or AL Legend or Atomic. I have compared, using a Magnehelic, a G250 vs the G260 and the G250 is equal to or perhaps slightly better for exhaust efforts. My 109s get right in there on cracking effort with excellent readings and do have a good Venturi despite no controllable vane. But on the exhaust side, I have to obscure the exhaust tee of a G250 to get it into the same work of exhaust readings as the 109/156. The last CE 156 regs are to die for, I admit. The others, well, they are pretty. And, well, the Conshelf with it's full size exhaust valve and large tee beats the 109. None of us have an ANSTI machine but I doubt the 109/156 would do better than mediocre for overall WOB.

So then, why my above diatribe, during the Zoom, future topics was brought up. Okay, perhaps of interest, or not among old Italian divers who enjoy exhausting second stages , a comparison of WOB, inhalation, Venturi and exhaust using a manometer. Case geometry fault is interesting maybe to some. A comparison of popular and well regarded vintage regulators to popular modern regulators, see how they compare on the Magnehelic, flow and Venturi. Flow and Venturi are difficult to perform in home shops so maybe not a good topic from a practical measurement possibilities. Maybe another billing, the heavy weight champs square off, Conshelf XIV with it's full size exhaust valve and "primitive" but environmentally sealed second stage with stable IP and reliability vs. the Scubapro (R for regulator) regulator 109 and a Mark V/X. My bet is on the Conshelf, that on an ANSTI test, it would beat out the pretty face.

I better run and hide. I may log back in a few weeks, months !

James
Swim down, swim around, swim back up
The past is past, the future is all that matters
Safety is way overrated
Swim, Bike, Run, Strength
Nemrod is my name, underwater diving is my game

Thanks for posting the vid. Even though I don't own an MK19 it still has provided a lot of great information. Thanks for taking the time.
The farther one gets into the wilderness, the greater is the attraction of its lonely freedom - Theodore Roosevelt
Courage is resistance to fear, mastery of fear, not absence of fear - Mark Twain
Fortune Favors the Bold - Lucius Cornelius Sulla

A session I wish I had been able to attend...
Bob