Maybe discussed many times, but I do think I have a unique situation. Let me give it a try. I am looking for alternative to OMS slipsteam. I need this style because I do a lot of precision movement. I am using size L with spring straps. I live everything about it EXCEPT these two aspects:
1. dry weight. They are measure 4.72lb (with spring straps). I wonder there is other similar style of fins for less dry weight
2. I have black. I want to be more visible in water. I know OMS makes a red version, and I have seen them underwater, they look dark brownish, not too much better. What would be the best visible color in water?

Is there a better alternative?

I saw people mention Deep6 Eddy, what is the dry weight?
OP

Weight– These fins are light and makes them a great fin choice for travel. I ended up leaving a lot of newly purchased dive gear in California due to weight restrictions as I left to come to the United Arab Emirates to train but no way was I leaving these behind nor did I need to thanks to the low weight. These fins weight in at 2 1/4 pounds for the large and 2.48 lbs each (4.96 pair) for the XL.

Look at the beautiful colour Pity about the really ugly orange of the heel pulling things
20,000 leagues under the sea diving to adventure
in a silent world with my ceiling the waves....Emile

Owning the Slipstreams and the Eddy Fins and Go-Sports I would say the fin you might want to try is the Scubapro Go-Sport. It is much lighter and slightly buoyant. The Go-Sport is more comfortable than either, a little softer in that it flexes a bit more. In terms of speed or thrust, it is a wash. Anything I can do in my Eddy Fins or Slipstreams I can do equally well in my Go-Sports including frog kicks and backing up. YMMV.

James
Swim down, swim around, swim back up
The past is past, the future is all that matters
Safety is way overrated
Swim, Bike, Run, Strength
Nemrod is my name, underwater diving is my game

Nemrod:
Owning the Slipstreams and the Eddy Fins and Go-Sports I would say the fin you might want to try is the Scubapro Go-Sport. It is much lighter and slightly buoyant.
Click to expand...

I remember this coming up in another recent thread; IIRC, the Go-Sports don't come with spring straps. Wonder how much weight difference is attributable to that (I wouldn't think a lot), and how much added cost is involved if one switches to spring straps for them?

You want white or yellow on fins if you really want to be visible underwater.

Deep6 in white should fit the bill.

drrich2:
I remember this coming up in another recent thread; IIRC, the Go-Sports don't come with spring straps. Wonder how much weight difference is attributable to that (I wouldn't think a lot), and how much added cost is involved if one switches to spring straps for them?
Click to expand...

The bungees are certainly lighter than springs, no doubt, but the fins themselves are lighter as well. It is true though and you make a good point, that using bungee instead of springs, would reduce the weight of the Eddy Fin.

Physically, the size large in both the Eddy and the Go-Sport are very similar, blade area is roughly the same, the foot pockets are similar though I give the edge to the Go because I find the open toe comfortable. And I do notice the less weight/mass on my feet when kicking along.

Trust me, I am not selling my Eddy Fins but for the Go I like the positive buoyancy and very light weight with little if any penalties in performance or maneuvering, even in current.

I think the MacMaster Carr barrel nut mod a good idea but have not yet done it. I got a pair for my wife, XS, she loves hers too and one of my dive buddies now has a blue pair in medium and he seems very happy with them coming from Quattros. The blue are beautiful and glow almost! I think it a good idea maybe for a long series of trips to get an extra set of bungees. The bungees are part of why the GO is so comfortable.

Weight per pair as supplied:

Note that all of these fit my size 11 (Nike) feet wearing the same Mares Classic boots.

In Cozumel my wife and I were trying to get position on a large turtle on the reef ahead for me to photo when this turtle joined us swimming right in between us (it's choice to do so) for nearly a minute before it became bored with us. My wife is waving at me to get my attention to take her picture by the turtle. I had been zoomed fully in and was trying to reset so not the best work but I got it: 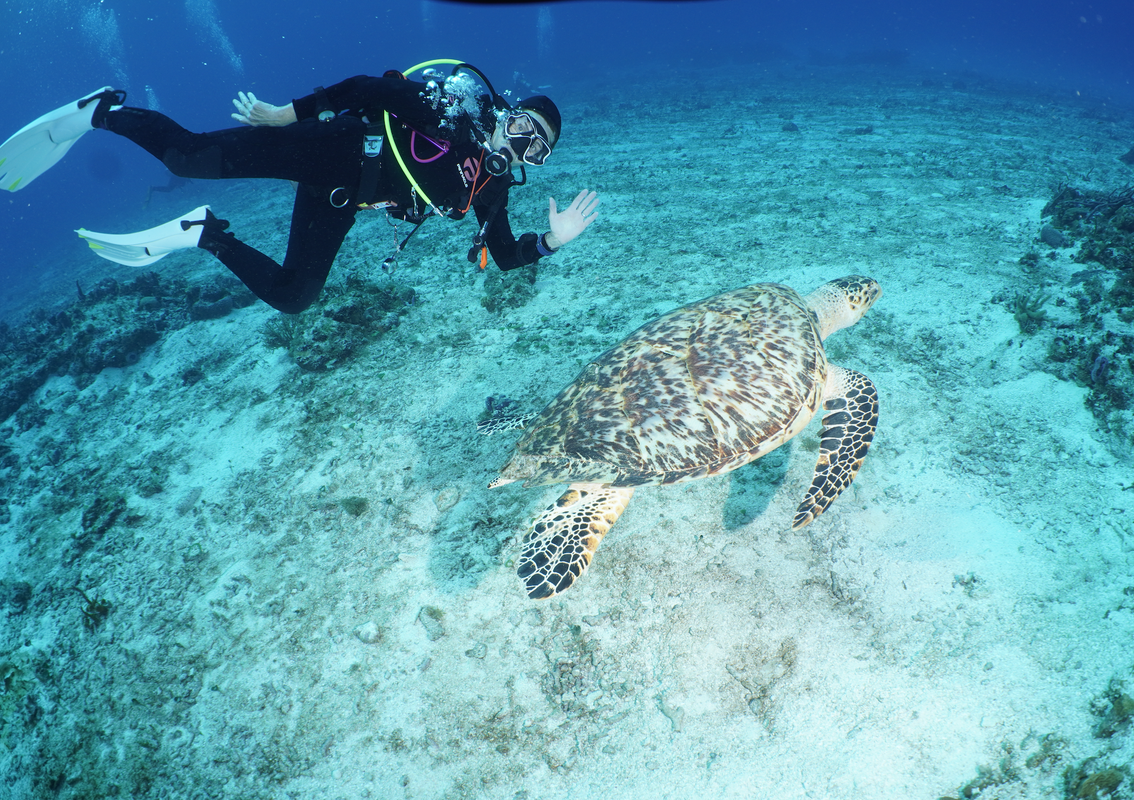 James
Swim down, swim around, swim back up
The past is past, the future is all that matters
Safety is way overrated
Swim, Bike, Run, Strength
Nemrod is my name, underwater diving is my game
OP

I think this is per fin, right? Kind of match with a number I quoted above which was from a review here. If so, it isn’t any meaningfully lighter than oms
You must log in or register to reply here.