Trip Report My Review and Video of Bull Shark Dive

I had previously done shark dives in Bahamas, Sint Maarten and of course, saw tons of them during my Galapagos liveaboard trip. For my final dive during my recent, long awaited return to tropical dive trip in Cozumel, I decided to take in the bull shark dive over in Playa del Carmen on the mainland since this was during the season when pregnant female bull sharks are found there from November to March. For this special shark dive, I used Phantom Divers.

The briefing for this bull shark dive was at their dive shop and one of the things I had to do was borrow some of their rental fins since my new orange Scubapro Seawing Nova Gorilla fins were considered too bright for this dive and may attract unwanted attention from the bull sharks to my feet. There are two types of bull shark dives offered here. 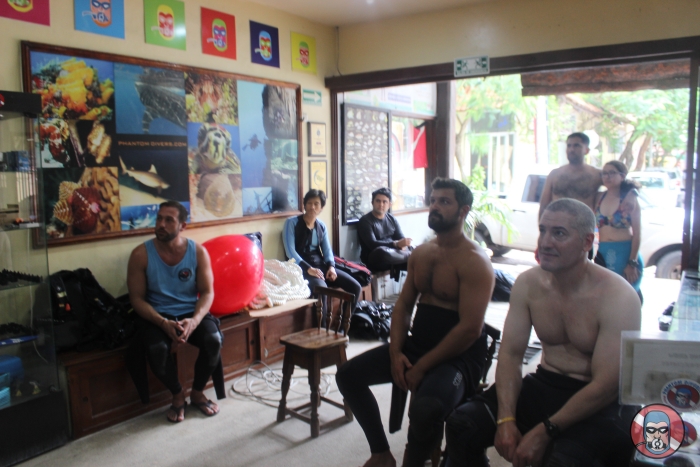 The first is a shallow dive that is done near where the bull sharks are thought to be but the better experience that will have divers right up close to them is the feeding dive where the site is deep at 85 feet. For this bull shark feeding dive, we were to remain stationary at the bottom holding onto a rope set in place for 25 minutes. We were overweighted in order to help remain at the bottom. The Phantom Divers crew were great at checking each diver to make sure their gear was okay and even assembled our weights for us.

Each dive shop in Playa del Carmen that runs bull shark dives are allocated specific times during the day to do them in order to have only one boat at a time at the feeding site. So we had to wait our turn for the 3 pm start and had to get to the bottom quickly since the clock was ticking for our dive time.

Since it is a deep dive, the divemasters warned us that our dive computers might go into the red zone for decompression and that's exactly what happened to mine towards the end of the bull shark dive. When it was time to go up, my dive computer just went into the red zone even though I had lots of air left at 2,000 PSI. My Atomic Cobalt 2 dive computer flashed a safety stop of one minute at 40 feet then a second safety stop for three minutes at 15 feet. By the time I did both safety stops, I was at half tank at the surface which was still lots of air remaining in my tank.

When I saw the bull sharks, I found them quite entertaining to watch mainly because of their body shape. Compared to all the other sharks I've seen before, the bull sharks were quite boxy in my opinion which made them look even a bit comical. They sort of reminded me of Sherman from the comic strip Sherman's Lagoon.

One thing different from this bull sharks dive and the other shark dives I've done, is that there were a lot of greedy smaller fish including a small stingray at the dive site all hoping to get some food action. Personally I found them a bit distractive since the real stars are the bull sharks and as you will see in the video footage below, sometimes they blocked out the views of the sharks. This was certainly not the case in the other shark dives I went on.

Here the fish and the little stingray were not shy as they circled around the feeding site very close to the divers. I even felt a couple of nibbles on my gloved fingers from some of these little fish.

So even though I've seen many sharks during past dives, I'm really glad that I did this one since I've never seen bull sharks before and they looked quite different from other shark species I've seen mainly because of their boxy shapes. If you are into sharks and in Cozumel during November to March, I would highly recommend that you get over to Playa del Carmen for a day or two to do this bull sharks dive.


Phantom Divers are one of the most experienced dive ops running bull shark dives (they claim they pioneered them) and I would recommend them. Note that you will need to meet at their shop with your gear if you are bringing your own and they are a 30 second walk to the beach where their boat will be (so not a hotel pickup op). Like with the other dive ops, this bullshark feeding dive is pricey at $160 US (for a single dive) but it's a rare chance to see bull sharks. Also if you are bringing a DIN regulator, I highly suggest that you bring a DIN to yoke adapter because their DIN tank on the boat failed and they did not have an allen wrench to remove inserts from the yoke tanks. Fortunately I brought my own adapter which saved the dive.

See my videos of my shark, dolphin, stingray and other reports on dive travel at my
Free Spirit Ski Scuba YouTube Channel

Thanks for the detailed review! This is an activity that garners some interest on the forum. Yeah, bull sharks are neat looking; some have that thick look with big pectoral fins and slightly short snout.

85 Feet for 25 minutes and it's apparently not uncommon to 'go into the red' (and even incur a deco. obligation...did I understand that right)?

Were you guys diving air or nitrox? Was nitrox an option?

The sharks ever show any aggression against the divers?
into the deep blue I’ll venture ….
OP

drrich2:
Thanks for the detailed review! This is an activity that garners some interest on the forum. Yeah, bull sharks are neat looking; some have that thick look with big pectoral fins and slightly short snout.

85 Feet for 25 minutes and it's apparently not uncommon to 'go into the red' (and even incur a deco. obligation...did I understand that right)?

Were you guys diving air or nitrox? Was nitrox an option?
Click to expand...

I believe all the guest divers were using just air. Not sure about the crew. Didn't ask if nitrox was an option or not as it was my final dive and only dive of the day after a fairly long surface interval from the day before.
Clint
NAUI Divemaster

See my videos of my shark, dolphin, stingray and other reports on dive travel at my
Free Spirit Ski Scuba YouTube Channel
OP

Jake 10:
The sharks ever show any aggression against the divers?
Click to expand...

Not at all. The smaller fish were more aggressive towards the food chum than the sharks too.
Clint
NAUI Divemaster

See my videos of my shark, dolphin, stingray and other reports on dive travel at my
Free Spirit Ski Scuba YouTube Channel
You must log in or register to reply here.