Here is my Undercurrent review of the trip with a few added details. A few photos also, some not so good, but you'll get the idea. I'm quite serious about diving, not so much about photography.

Travel: I flew from Philadelphia to Guayaquil on American Airlines with a stop in Miami. This would have been a great flight had they put my scuba gear on the plane in Miami. I was shocked to arrive in Ecuador without my luggage. Fortunately, there was an additional flight from Miami that night and my scuba gear was delivered to my hotel at about 1 AM, I could sleep after that.

I stayed at the Wyndham Guayaquil for my one night, a very nice hotel with a great breakfast buffet.

I flew to and from Baltra on Avianca Airlines, perfectly competent and without any problems.

I was to fly back to Miami and then Philadelphia the last day of my trip. Unfortunately, the plane was cancelled due to mechanical problems. I slept for 1 hour in a hotel and then flew to Panama City and then Miami on Copa Airlines. I finally flew back to Philadelphia on American. I arrived in Philadelphia to receive a text and email that my bag had been delayed. I filed the report online and went home. Turned out the delay report was based on the cancelled trip from the night before and my bag had actually arrived. I revised my bag report and it was delivered the next day. Clearly, this was not American Airlines banner trip, they reimbursed me a reasonable number of miles. Despite the travel woes, this was a fantastic trip and could not be ruined by travel problems, see below.

Boat and Crew: The Aggressor III is not a new boat but it has been well taken care of. The boat had been in dry dock January-March of 2018 and was neat, clean, and everything worked perfectly. There is room for 16 passengers, we had 16, one was a non-diver. There are 8 cabins, 4 deluxe cabins on the lower deck, and 4 master cabins on level 3. All of the rooms are of similar size, one of the masters is a little bigger. All the rooms are set up as 2 twins, 6 of them can be converted to a queen. The deluxe rooms have small rectangular portholes, the master rooms have a nice picture window with mini-blinds. I did not see any of the rooms on the lower deck, I was in cabin 6 on the upper deck. This is my 3rd Aggressor (Red Sea and Cocos) and was the nicest room of the three. The picture window let in a lot of light and made the room seem bigger and cheerful during the day. The air conditioning worked flawlessly, a nice split unit with an accurate thermostat. There was a decent amount of storage space with a wardrobe, a nightstand, and an above bed shelf. Larger luggage was kept elsewhere. The beds were comfortable. The bath/shower was the best of the 3 Aggressors. The bath had a nice size counter and sink. The shower was relatively large with a real door, good water pressure and plenty of hot water.

The comfortable dining room and lounge are on the main deck, there is a spa on the same level on the bow. The efficient dive deck is also on the main deck. Each station has 2 cylinders with adequate storage space underneath. One of the 2 cylinders was almost always used and filled in place. Occasionally, when time was short, the 2nd cylinder was employed. Tank fills were generous, averaging 3200 psi (3150-3450). Nitrox ran 32-33% all week. There was a moderate sized camera table with two air hoses and a relatively large two compartment camera rinse tank. There is a large sun deck on the 4th level, part covered part open.

The crew was fantastic, as has been my experience on the other 2 Aggressors. I dived off the same panga all week with a fabulous guide, Nelson Martinez. He has been with the Galapagos Aggressor for 18 years and remains incredibly enthusiastic about the diving. I had numerous conversations with him and learned a lot about our dives and the sea life. The steward was a great young man named Jhonatan Salmeron. He worked tirelessly to make sure dining was as good as possible.

The food was very good but not quite on par with the excellent food I had on the other 2 Aggressors. I don’t go to eat, someone who does, might be a bit disappointed. There were at least a couple of choices for main course and plenty of variety at every meal. Many of the deserts were delicious.

All dives were from a panga, back roll in, hand up weights, BC, fins, board by ladder. In general, dives were made as a loose group and ascents were made together. The average dive time was 56 minutes (46-64 minutes), with the shortest being the Wolf night dive. The water temperature varied dramatically. At Cabo Douglas and Punta Vicente Roca, the water temperature was in the 60s, a low of 63. At Wolf and Darwin it was 76-77. It was in between at the other sites. I was comfortable in my full 7mm wetsuit, usually with a hooded vest. Some divers got quite cold, particularly at Cabo Douglas and Punta Vicente Roca, with lesser degrees of exposure protection. In general, currents were not terribly strong, with a couple of exceptions. We clung to rocks to maintain station while watching Mantas and sharks. In general, seas were calm, a little less so at Wolf and Darwin. There was moderate surge at times close to shore. Visibility was about 20-60 feet. Most of the Mantas were at Cabo Marshall, sea lions at Cabo Marshall and Wolf, Hammerheads, Galapagos, and Blacktips at Wolf and Darwin, the 3 Whale Sharks were at Darwin. The Marine Iguanas were at Cabo Douglas and the Mola molas were at Punta Vicente Roca. The night dive at Wolf was one of, if not the best, night dive I’ve had. We dropped on an Eagle Ray, there were many turtles, most sleeping, and many lobster, crab, and Hermit crab. There were a large number of morays out hunting, one swam under the guide and caught a fish in his light before swimming away munching. There was a fascinating large mollusk out cruising, a Grinning Tun. The dive ended much too quickly.

We did two land excursions. We hiked to the summit of Bartolome for an incredible view of the islands. We saw the penguins from the panga at Pinnacle Rock. On the last day we visited Santa Cruz and took a bus to visit lava caves and a Galapagos Giant Tortoise preserve. It was unfortunate, but I did not have the time to extend my visit a few days for additional land-based Galapagos activities.

So…a great boat and crew and absolutely fantastic diving. A trip of a lifetime. 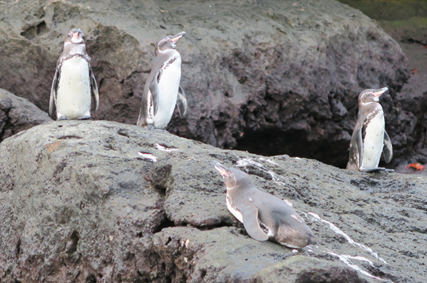 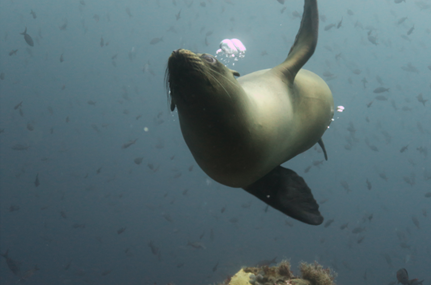 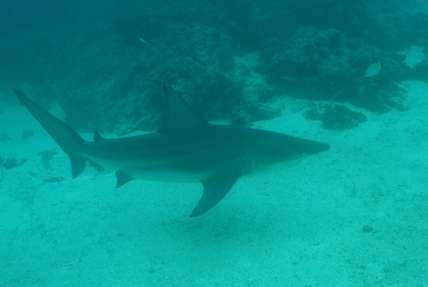 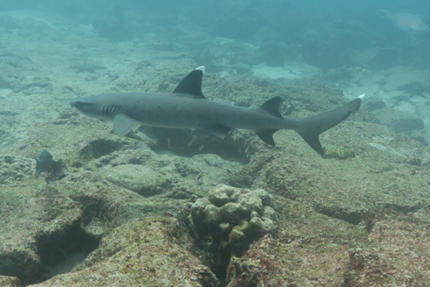 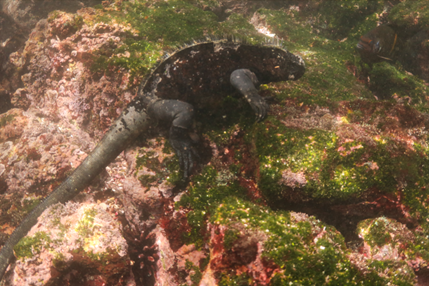 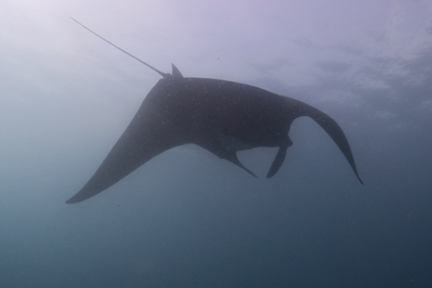 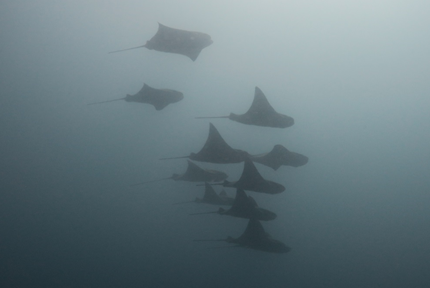 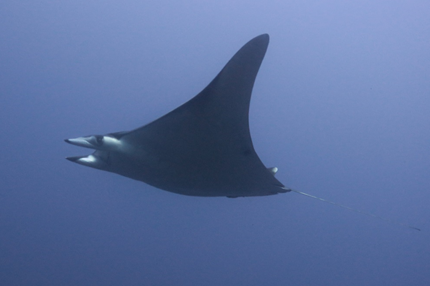 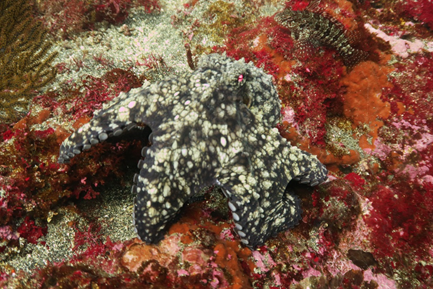 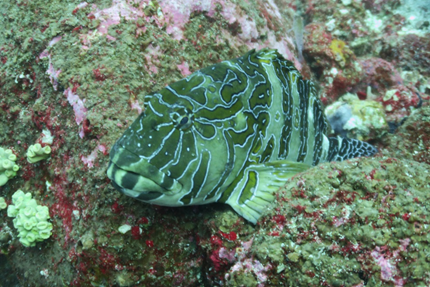 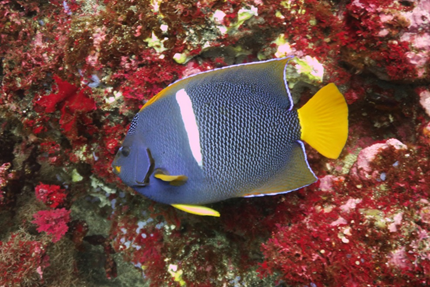 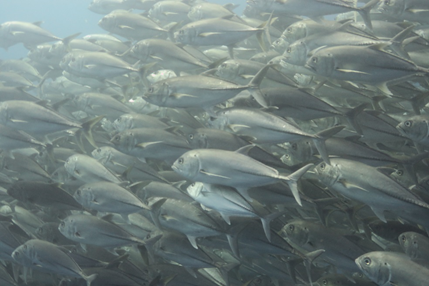 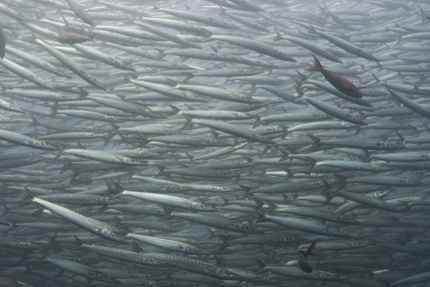 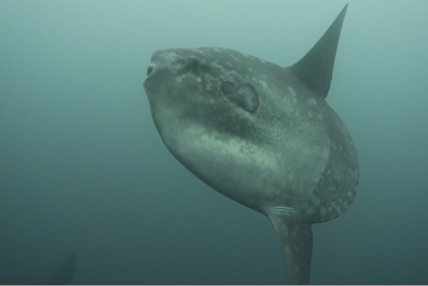 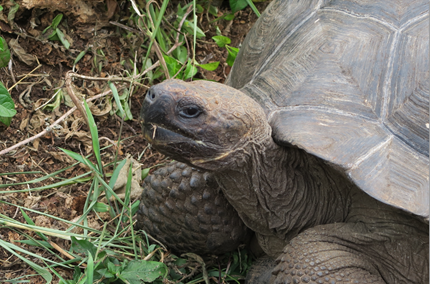 Fantastic trip report and pictures! This region is next on my planning list so I definitely appreciate the good reporting.

Amazing diversity of life packed into a single trip; not sure where else someone could match that. Great report.

drrich2:
Amazing diversity of life packed into a single trip; not sure where else someone could match that. Great report.

Thanks Richard, and I forgot the Blue Footed Booby! Appreciate the compliment from the king of the trip report.

Location
Planning my next vacay

Anyone going to Galapagos, consider Reef Fish of the Galapagos 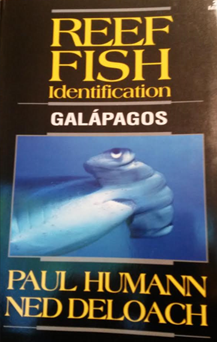 A trip we all must do one day! great report thanks!
Yago Rodriguez Perez

Blue Nation Baja (Loreto, BCS)
www.bluenationbaja.com
You must log in or register to reply here.

Galapagos - what is the best season for UW videography?