I'm not sure if it's true, but I've seen a documentary a while ago about Russian ice divers and one of the divers said they preferred the old piston regulators (looked like old pre plastic era mk2's) for ice diving because supposedly they don't build these huge chunks of ice and the water contact actually transfer heat back easier so that they thaw more easily.
It seemed very counterintuitive to me, since we're always told pistons are not reliable in cold water.
N

thanks for all the comments! Seems like I should potentially end up going with some Sherwood Blizzards as the best bang for the buck.

Even then though, there is conflicting information about the Sherwood Blizzard performance (at least, the older generation). Some papers say the Blizzard failed early, and others say that the Blizzard out performed all other regulators.

I have dived multiple times under ice with Apeks Atx200 and Poseidon trident. 0 freeflows. Breathing has been easy even upsidedown (when walking on ice).

Heat sink is heat transfer. Being in salt water that is below the freezing point of fresh water is an interesting twist. I would take the advice of those who have dove arctic conditions. I can see where a heat sink would not be a good idea in this case.

My understanding is a good 1st stage can turn into a ball of ice on the outside, but still function good. The second stage is more vulnerable due to the moisture in your breath. I also recall that dialing back the IP means less pressure drop and less cooling effect in the 2nd stage.

sane people dive CCR in arctic waters because the gas is warmer than ambient. Especially those with active heaters on the scrubbers....

rhwestfall said:
Go for a double hose...
Click to expand...

Argonaut Kraken in action under the ice (not my pic... brrr!) 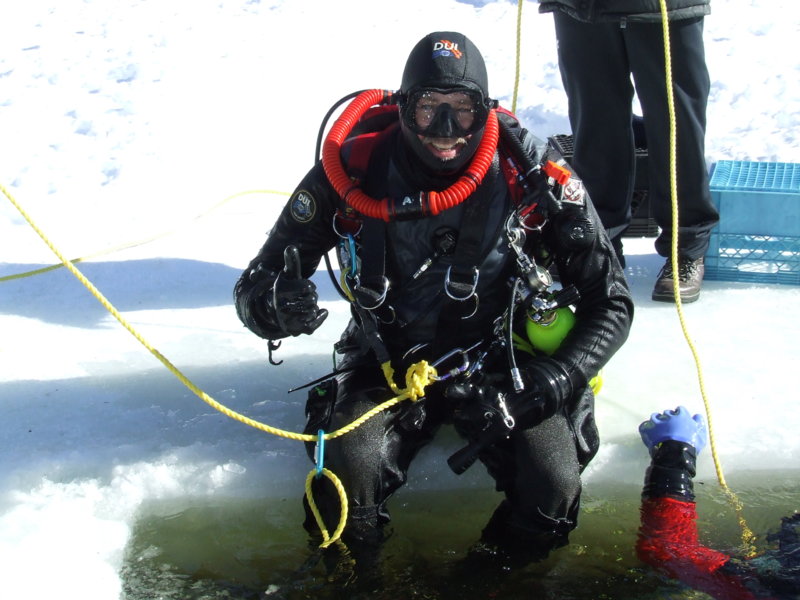 'A man can never have too much red wine, too many books or too much ammunition'
Rudyard Kipling
R

n3rdftw said:
thanks for all the comments! Seems like I should potentially end up going with some Sherwood Blizzards as the best bang for the buck.

Even then though, there is conflicting information about the Sherwood Blizzard performance (at least, the older generation). Some papers say the Blizzard failed early, and others say that the Blizzard out performed all other regulators.
Click to expand...

The link below indicates that the Sherwoods that are/were used at McMurdo are/were an older (1991), modified Maximus model (SRB3600), not off the shelf Blizzards. I don't know if the Maximus regulators have been removed from service. It's an interesting read if you have not seen it before and are interested in Antarctic diving. It looks like the Poseidon Xstream was the only one that did not free flow during testing for a replacement.

From the above link"

"At its inception in 1947 (through the US Naval Support Force Antarctica) through 1967 the USAP diving program issued double-hose regulators to NSF scientific divers. In 1991, double-hose regulators were retired from service and replaced with single-hose, modified Sherwood Maximus SRB3600 regulators. A heat retention plate was fitted over the second-stage exhaust valve and around the air delivery lever and the intermediate pressure detuned from 145 to 125 psi to reduce the probability of free-flow in supercooled sea water at -1.86oC in McMurdo Sound. The decision to investigate replacement regulators was influenced by the age of the 1991 Sherwood models, their less than optimal breathing characteristics, and the lack of continued parts availability in 2008 to avoid potentially catastrophic regulator failure."

"One of the first regulators to be dropped from testing in Antarctica was the Mares V32 Proton Ice Extreme, the subject of a recent Diving Advisory (09-07). At the other end of the spectrum, the Poseidon Xstreme was the only regulator that suffered no free flows at McMurdo, and is also the only regulator that never free flowed during NEDU's rigorous 2004 testing program for cold water regulators. The prototype Mares regulator that was the progenitor of the Proton Ice Extreme, then called the Mares Proton Ice Teflon V32 CWD, did free flow occasionally in NEDU's testing. At this point, the regulator's poor performance in Antarctica is inexplicable, however, further NEDU testing should soon reveal the cause of the problem."

Fibonacci said:
Argonaut Kraken in action under the ice (not my pic... brrr!)

I know that guy!

@tbone1004 I think there's a misunderstanding here about the Norsok test. Although this test is performed in cold water down to 400msw, it uses Heliox. Heliox does not freeze your first stage but heats it. Apeks were tested to 200msw on Heliox. This test is only interesting for work of breathing at depth for example for deep professional divers on heliox, but it does not tell much about freezing issues for recreational divers on air or trimix.

1st Stage internal temperauture, please see page 13
The temperature in the first stage can drop below the freezing temperature of seawater. Therefore a heatsink still works in the cold water.
You must log in or register to reply here.

A
Some thoughts for assembling my first regulator set
2