Do you love sharks? Then make sure to be there Thursday, June 16th at 7:30 pm as we're joined by David Shiffman. It would be easy (and accurate) to bill Dr. Shiffman as the author of the new book Why Sharks Matter, but that's just scratching the surface. He also manages the popular @WhySharksMatter Twitter account and was a finalist for the Best Science On Social Media award. Two of the other finalists that year were Neil DeGrasse Tyson and Bill Nye. That's good company to keep! His work has appeared in the Washington Post, National Geographic, Scientific American, and Scuba Diving Magazine. 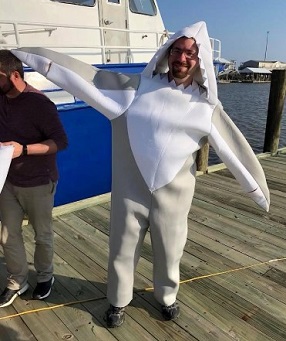 Dr. Shiffman is the only person who out-geeks CHUM when it comes to goofy shark stuff, so we absolutely had to invite him to be a speaker. He's not a boring lecturer, either. He makes science both interesting and accessible.

Dr. Shiffman will be joining us via Zoom. Feel free to watch it with other CHUMmers at Jake's Sports Bar (2944 Chimney Rock Rd) or from the comfort of your own home.

Get full details including the Zoom info at this thread.
www.chumclub.org
Houston's dive club
The water's more exciting with CHUM in it!

Hope you can join us on Thursday, either in person or via Zoom!
www.chumclub.org
Houston's dive club
The water's more exciting with CHUM in it!