I'm trying to update the OS on my Cobalt 1 (version OS 1.13/2) to the newest version. To do that, I understood from the instructions that I was to download and unzip the OS 1.62 hex file and install Logbook 2.1. I established a connection via USB with the DC. I have OS 1.62 unzipped and ready to go. But when I open Logbook for the flash update, the screen isn't the same as is shown in the instructions, and I can't figure out how to get Logbook to take in the hex file. I can't drag the hex file into any of the boxes, and when I try to "Retrieve New Software", I get a message that says "No Internet Connection". The Cobalt can communicate with Logbook because I got it to download my dives, so I'm having trouble figuring out what to do next. 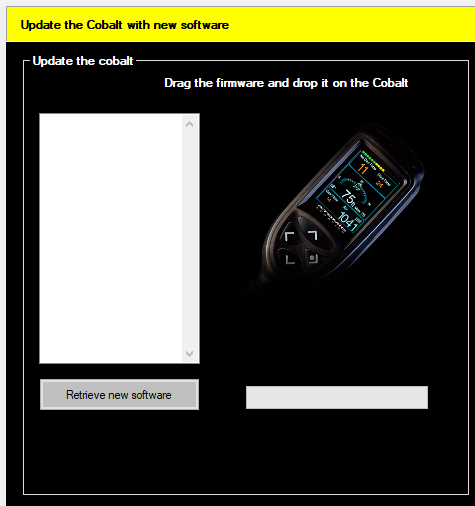 That Windows logbook program was something Atomic contracted out to a third party, and to my knowledge it has not been updated in years. You could try contacting Atomic via email to see if they have any suggestions, we really don't know much about it here. I do experience the same thing trying it with Windows 10. It may work with older Windows versions, it did work for us with Win7.
The best suggestion I can offer is to find someone with a Mac and use the Mac program to update the firmware- your firmware version is very old and should definitely be upgraded. The Mac program is only an updater, not a dive log, and continues to work well with all Mac OS versions. Atomic Aquatics Cobalt Software

There are quite a few alternative logbook programs that download directly from the Cobalt. Some are:
Sorry I can't offer a quick fix, hope this helps.

Thanks for the suggestions. I need the CPSC recall done as well. I contacted the original dealer, and he’s going to see if Huish will do the recall and OS upgrade since the nearest Atomic servicing dealer is about 200 miles from me (I moved since I purchased the Cobalt).

They should certainly do the recall service. let me know if you have any problems.
Our SB support page:
Ocean Concepts
OP
S

I got some guidance from Adan at Huish on the OS upgrade. He suggested that I copy the uncompressed hex file to C:\ProgramData\AtomicsAquatics\Cobalt-Logbook\hexfiles. Per his instruction, I had to change a setting on the Windows 10 File Explorer to enable the viewing of hidden files (an option under the View tab of File Explorer). Once that was done and a USB connection was established between the dive computer and Windows computer, the Logbook flash option worked fine. I was able to drag the hex file which now appeared on the flash screen over to the image of the Cobalt, and the update was completed in a couple of minutes.

This may be a useful suggestion for others who are having difficulty with flash updates via the Windows version of Logbook. Adan confirmed that the problem I was having is a known defect, but he did not provide a projected fix date. Given that he has a viable workaround, I suspect it isn't a high priority.

Thanks again for your help! 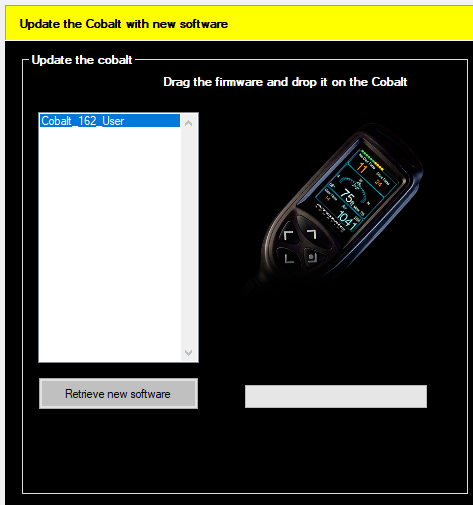 Steve,
Thanks for your reply- this will certainly be useful to others.

-Ron
Our SB support page:
Ocean Concepts
You must log in or register to reply here.

Puck Air - no longer will connect to Dive Organizer