Orcatorch D530 Review (does not work below 35m)

Normally I buy higher quality diving gear and go with the the "buy once cry once" mentality but with the growing popularity of the lower cost knock off lights I figured I would see what all the hype is about so a while back I purchased two @OrcaTorch D530 lights from Piranah Dive for USD $89.95

The main intention was to use them as backup lights for cave diving, secondary use as a small light to bring on fun dives. I used them, but not in the on mode as they were backup lights helmet mounted (I use a UWLD for primary light) for about 1.5 months straight cave diving almost everyday included lots of exploration, with repelling, jungle trekking, etc. So yes I put the through the paces.

For the Pros:
So far I have not broken either light or had any failures, every pre-dive check they are always working. So from an initial short term durability standpoint they seems to be holding up ok but I think after a solid year or two of cave diving would give a much better idea.
Construction wise they seem to be built well just like any other 18650 light, they are almost the exact same size as the Big Blue lights and when helmet mounted you would not be able to tell the difference.
The light output is good and I have used the low power mode in dry cave sections for long periods of time and never had any overheating issues.

And for the Cons:
The biggest one for me and the one that is a show stopper which really kind of makes the light useless is that the on/off button stick after about 35 meters. As per the manufacture the light is rated to 150 meters however this is somewhat false advertising. Yes maybe the seals are rated to that but the functionality of the light is limited to about 35 meters. Just like on lower cost camera housings as the pressure increases the buttons stick making them useless and as far as I can tell there is not good way to take apart the button to put a stronger spring in it. Now for those that are strictly doing shallow diving this would never be an issue to consider and yes this light is a good chose but if your doing anything below 40m the light is useless.
Next con is the price at $89.95, yes it cost less than some of the big name brands but $90 for a light is still a little on the steep end when it was advertised to be rated to 150m but in reality it become useless after 35m. The 150m rating is one of the main selling points for why I picked OrcaTorch over some of the other ones like XTAR

Conclusion:
Me personally for my use and my requirements I would just stick with the bigger name brands, yes they are more expensive but really they are not that much more in comparison to a Big Blue so just spend the extra money and go with the buy once cry one theory. As I said the OrcaTorch lights are kind of useless to me as I often and doing dives well below 35m meters so $180 plus the cost of two new lights in the end its actually more expensive.

Just for comparison here is a pic of my D530 vs. Big Blue. And also yes I can confirm that the Big Blue's work down to 130 meters (have not taken it deeper as the depth rating is only 100m) 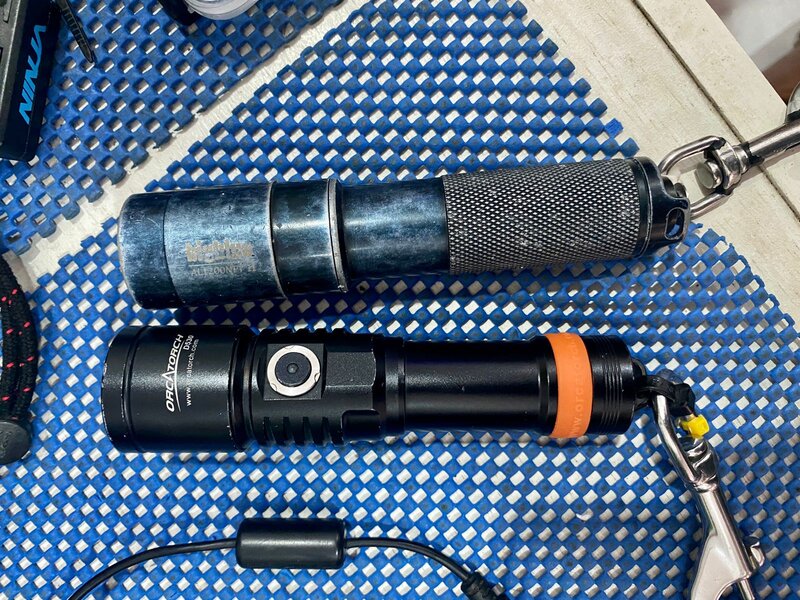 I have several of the the screw head switch version of that torch and think they are excellent. Buttons and switches are the weak point of torches and best avoided.
OP

KenGordon:
I have several of the the screw head switch version of that torch and think they are excellent. Buttons and switches are the weak point of torches and best avoided.
Click to expand...

Yes I wish it was the screw type.

These Orca 520s twist and work deeper well and brightly For around a 100 a pop
20,000 leagues under the sea diving to adventure
in a silent world with my ceiling the waves....Emile
OP

I have two D530's with extra sticky buttons I can upgrade your D520's with. Sounds like a fair trade???

Magnificent I'll take six.
20,000 leagues under the sea diving to adventure
in a silent world with my ceiling the waves....Emile
You must log in or register to reply here.

S
Looking for wide angle but not for video/photo