Help me understand the rule of fifths for IBCD

rsingler said:
This great article gives you a quick and dirty understanding of the rule of fifths as a way to avoid Isobaric Counterdiffusion when diving Helium.
Click to expand...

The rule of fifths is a classic example of 'bro-science' that somehow became accepted as fact and continues to be perpetrated to this day. It confuses gas solubility (the number of gas molecules that will dissolve in a tissue at a given partial pressure) with the effect of a gas switch on tissue gas partial pressures. Let me try to illustrate this fallacy with an example.

In considering this example, one must remember that the cause of decompression sickness is tissue supersaturation (the sum of gas partial pressures in the tissue exceeds the surrounding pressure) which can provoke bubble formation.

Lets say we are sitting at 90m, 10 atmospheres pressure, breathing 10% oxygen and 90% helium. Lets also consider a tissue that is saturated with helium, essentially at the pressure we are breathing it (so the pressure of helium in the tissue is close to 10 atmospheres).

Now, obviously no one would do this, but to illustrate the principle, just after what we can call timepoint "A" and without changing depth (so this event is truly isobaric) we change from 10:90 oxygen-helium to 10:90 oxygen-nitrogen. Obviously helium will leave the tissue and nitrogen will enter it. If we wait long enough I think we can all agree on the simple premise that all the helium will be gone, and now the tissue will contain nitrogen at close to the pressure we are breathing it (~10 atmospheres). Call this timepoint "B". Yes, the tissue will contain more molecules of nitrogen (than it previously had helium) at that same pressure because nitrogen is more soluble, but the partial pressure won't be any different, and where is the supersaturation that would cause bubble formation and DCS?

The real question, of course, is what happened to tissue gas pressure during that period of isobaric tissue gas exchange (helium out, nitrogen in) between timepoints A and B. If the two gases exchanged at exactly the same rate then there would be no net change in tissue gas partial pressure. In fact, if anything, helium tends to leave tissues faster than nitrogen enters them. This means that for a period between timepoints A and B the partial pressure in the tissue will actually fall lower than the ambient pressure. Put another way, (with one conspicuous exception - see below) the tissue becomes undersaturated rather than supersaturated. This is illustrated in the figure below where timepoints A and B are approximately illustrated by the beginning and end of the thick black line. This is where the rule of fifths based entirely on solubility gets it completely wrong. In fact, the opposite to what the rule of fifths would predict is occurring. 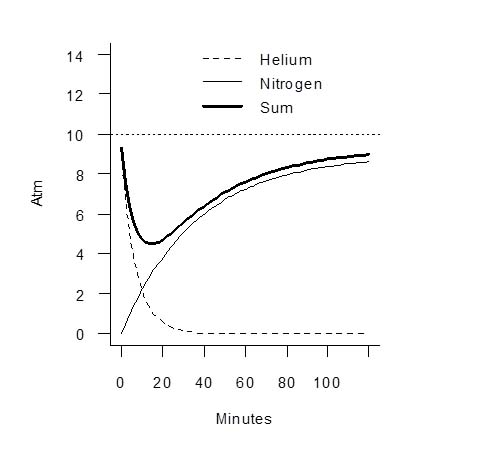 So, to be clear, a gas switch from high helium to high nitrogen should, if anything, reduce tissue supersaturation, not increase it. The extent to which this really happens in tissues of relevance to bounce diving is open to debate but if there are differences in helium and nitrogen kinetics they should favour gas elimination. This is illustrated in the very simple diagram below which depicts the situation immediately after a helium to nitrogen gas switch and shows helium leaving the tissue faster than nitrogen enters it (no proportionality intended). 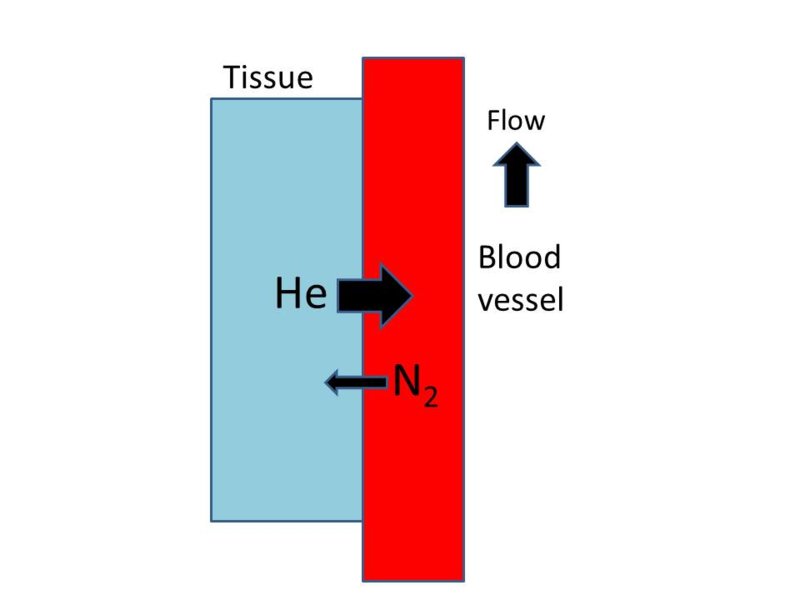 The conspicuous exception mentioned above is the inner ear, but this is because of its unique anatomy, not because the rule of fifths is physiologically valid. The inner ear has several non-perfused fluid filled spaces that can only exchange gas via the neurologically sensitive perfused tissue. Once these are 'loaded' with helium, they can act like helium reservoirs that prevent the partial pressure of helium in the tissue falling after a gas switch. In this setting, the inward diffusion of nitrogen from the blood can cause an increase in the total pressure of gas in the tissue - leading to supersaturation and (potentially) to bubble formation. This is illustrated in the simplified diagram below. Think of it as the helium entering the blood faster than the nitrogen enters the tissue, but the pressure of helium in the tissue does not fall because it is being 'topped up' from the adjacent reservoirs, so the nitrogen in-gassing raises the tissue gas pressure, potentially leading to supersaturation. 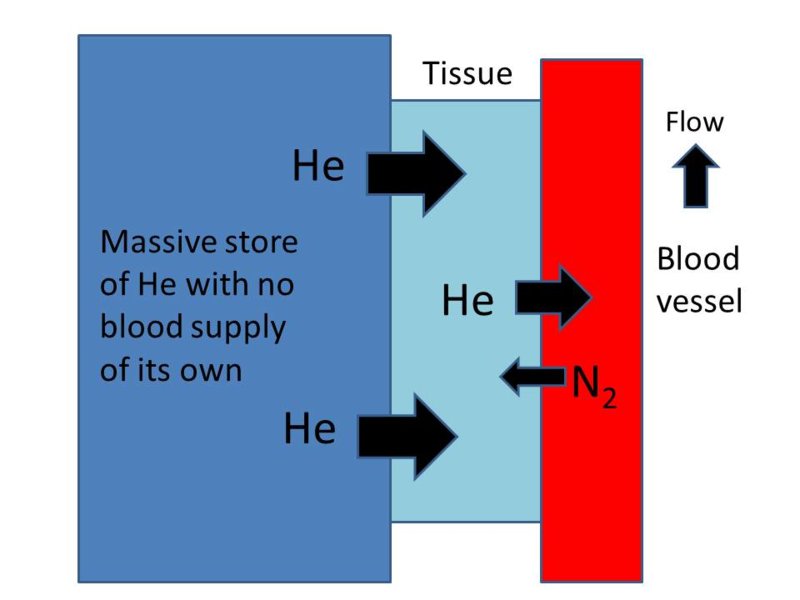 Thus, the inner ear is vulnerable to an increase in tissue gas pressure after an isobaric helium to nitrogen gas switch. However, David Doolette has previously modelled the magnitude of such changes and found them to be small and likely insignificant unless the inner ear has already become supersaturated during the ascent (in which case the extra supersaturation from isobaric counterdiffusion could act like the "straw that broke the camel's back"). This would be most likely if the gas switch took place relatively deep during the (relatively) rapid part of the ascent toward the first stops on a typical deep technical dive (and such problems seem very rare in dives shallower than ~100m).


rsingler said:
How does one properly use the rule to determine intermediate deco mixes?
Click to expand...

Personally, I doubt isobaric counter-diffusion is a very relevant concern in modern technical diving where most divers doing deep trimix are using rebreathers. These days I just stay on bottom diluent to the surface, and don't bother with diluent switches. The rebreather takes care of increasing my inspired oxygen fraction as I get shallower. Open circuit is obviously different. Even though the rule of fifths is based on a flawed premise it would likely prevent any inner ear problems caused by isobaric counter-diffusion if followed. But it is very conservative and may create more risk (eg the need to carry more intermediate gases and more switches than necessary) than it resolves. In some ways it can be seen in a similar light to the original 'oxygen clock' recommendations - a rule with little physiological pedigree, and often ignored, but nevertheless a 'calibration point' from which people can work.

@Dr Simon Mitchell I was talking about this with a few other instructors last week and we are obviously all doing these dives on CCR, but the concern was in the choosing of bailout gas. Are you using more or less standard type gases for deco bailout?

tbone1004 said:
@Dr Simon Mitchell I was talking about this with a few other instructors last week and we are obviously all doing these dives on CCR, but the concern was in the choosing of bailout gas. Are you using more or less standard type gases for deco bailout?
Click to expand...

Good question. I must say that I don't give counter-diffusion problems a second thought when choosing bailout gases. I make bail-out choices based on the principle of having one gas that is very breathable at bottom depth, and other gases optimized to enhance inert gas elimination thereafter (so yes, more or less standard type gases). I would absolutely not carry intermediate trimix bailout gases for the purposes of complying with the rule of fifths.

Simon M
You must log in or register to reply here.

Help me to understand what happened
3 4 5